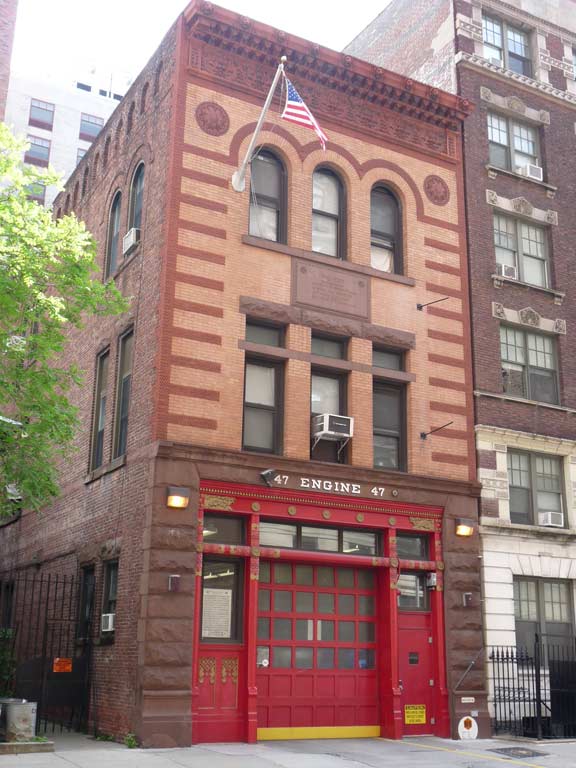 There are still a number of 19th-Century firehouses scattered around town, exhibiting architectural styles popular in the years they were built. Engine 47, #500 West 113th Street off Amsterdam Avenue, was constructed in 1889 in Romanesque Revival by the firm of Napoleon LeBrun and Sons. It is a compact building with varying colors of brick and brownstone, differently-shaped windows, an intricate roof treatment, and the red paint job the FDNY gives most firehouses. 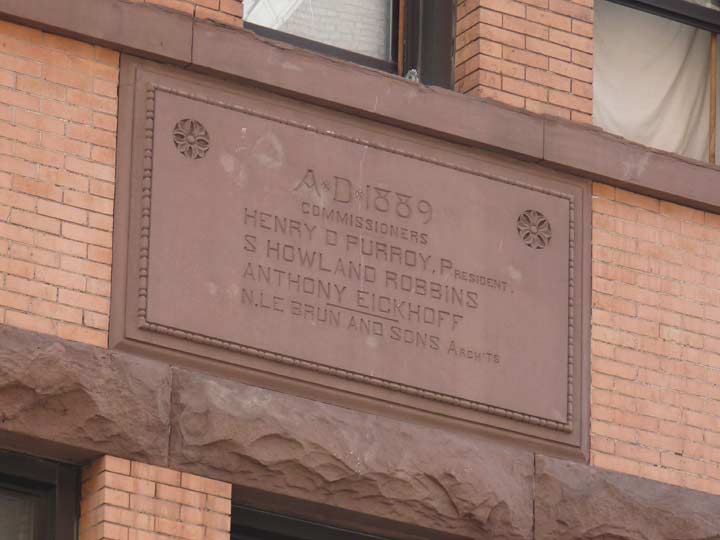 While firehouses built in later decades often have plaques indicating date of construction and officials at the time, the plaque at Engine 47 was constructed as part of the facade. I like the flat-topped 8’s–the sculptor probably found it easier to do them that way.

Henry Dillon Purroy (1848-1903) a Tammany Hall lawyer by trade, was elected president of the FDNY in 1885 by the Board of Fire Commissioners.

I lived in that building to the right for 15 years from 1974! People would ask me whether the sirens woke me up at night but they did not. For one thing my apartment was in the back, but for another, they did not use the siren until they got to the corner of Broadway or Amsterdam.

For some part of that time the firefighters here actually kept a dalmation, because I guess they just had to have one, right? It was a good dog. You could say hello to it and it just looked at you. I have a soft spot for NYC firefighters because my father was one from 1946 until they made him retire in 1983. I saw the firefighters themselves renewing the red and gold paint a couple of times. They knew what a great building this is and were proud of it.

To the right of the door, the dark patch in the sidewalk is the hatch for the coal bin, which for some reason was lifted open sometimes. I can’t believe they still had coal heat that late, but….?

Not in the picture, but to the left is a stone Croton Aqueduct building quite a bit older than the firehouse that Kevin will, or has already, described. It is now attached to the seniors’ residence behind it.

The coal wasn’t just for heating the firehouse, it was also used heat the water in the steam engines. Depending on whether they were still using it to heat the firehouse(a real possibility given the costs to renovate) if it wasn’t an act of vandalism and/or kids and their curiosity then then by that era it was probably a quick way of delivering stuff to the basement of the firehouse, firefighters have been known to repurpose simple things like that to make a task easier 😉

My aunt lived across the street from the firehouse for close to 40 years and she worked at the hospital across from there same
amount of time. We would visit her and every time the sirens sounded we would run to the window in awe .. was exciting to us and I aware the sirens would sound a dozen times a day .

My dad, Francis X Moran was Captain of Engin 47 and 113th Street, Manhattan in the 60’s