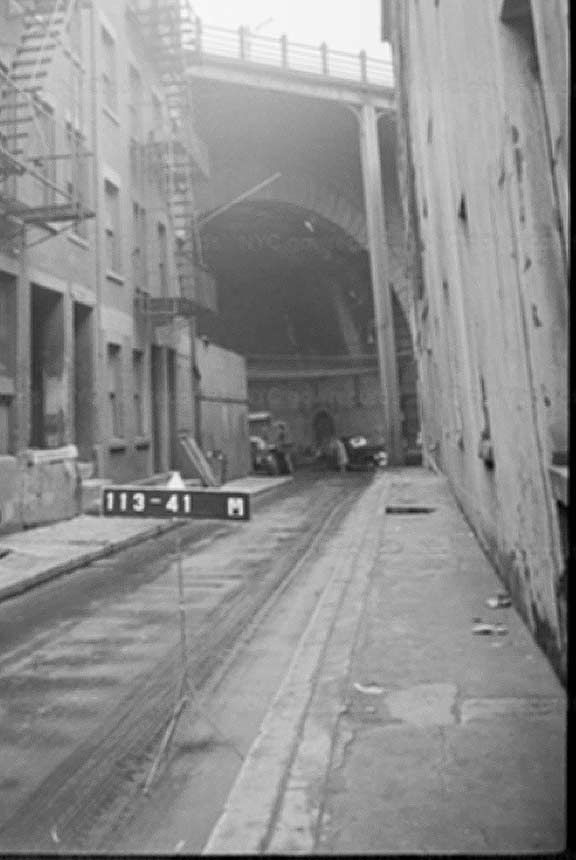 I have been poring through the 1940s tax photos that NYC recently added to its online Municipal Archives. Formerly, you had to request these shots from the Archives at $25 a pop! Not only that, on at least two occasions, I’ve sent in a check for that amount, only for it to disappear without acknowledgment. Those days are over as the trove is now online. The vast majority of these pictures are nearly-identical shots of private homes. However, there’s some esoteric delights to be found. I spent a half hour looking at photos under the el on Myrtle Avenue in Brooklyn, which was torn down in 1970.

All shots in the Archives have signs in them that show the official block and lot numbers on the street, in this case, 113 and 41.

I have also been looking for streets that don’t exist anymore, such as Hague Street. The Archives has a few shots of this street, which is completely forgotten since it was paved over in 1957. 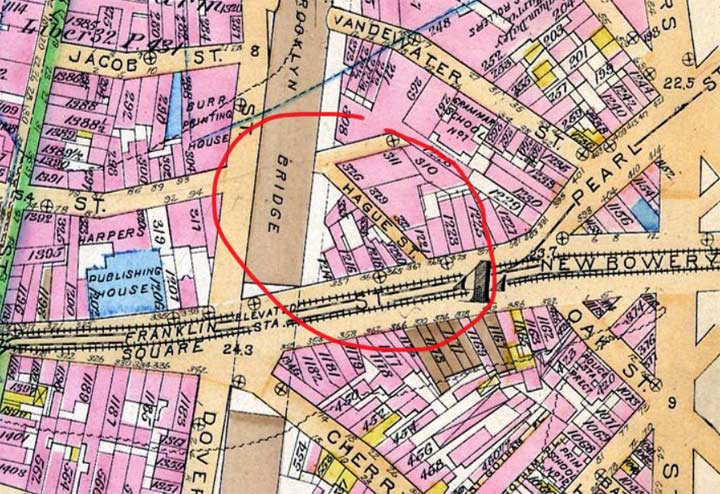 Hague Street ran between Pearl Street and Cliff, which came to an unusual dead end just north of the Brooklyn Bridge. In our picture we’re looking toward Cliff Street with the Bridge looming at the end of the block. Hague Street, named for a large city in Holland that is the site of the World Court and seat of Netherlands government, was part of an intricate network of small streets in southeast Manhattan, most of which have been completely eliminated by housing projects, schools, and the present NYPD headquarters in the late 1960s. On the 1885 map shown here, Franklin Square, Hague, Oak, Vandewater, and Jacob Streets have been eliminated and only Pearl Street follows its original course; Cherry Street (where George Washington made his home as President when USA government was seated in NYC) has been cut back to a few blocks on the Lower East Side.

The present site of Hague Street, west of Pearl and north of the Brooklyn Bridge, is occupied by Murray Bergtraum High School.

I’ve been waiting years for the the 1940s archives to go online. Thanks for pointing this out.

No doubt, named for the city, to honor early New Netherland settlers.

Anyone interested should read “In the Shadow of the Bridge” by Joseph Caldwell. He is a writer who lived in an apartment on Hague Street which he writes about in this novel.

“On Monday, the 4th day of February, 1850, a melancholy and most deplorable calamity occurred in our city, caused by the explosion of a steam boiler in the building known as Nos. 3 and 5 Hague street (sic), whereby the building was instantaneously and wholly demolished; sixty-seven persons at work at the time therein were killed, and fifty others either severely or slightly injured.”- Report of the Special Committee appointed by the Common Council of the City of New York relative to the catastrophe in Hague Street, on Monday February 4th, 1850