I recently took a lengthy walk recently from Oakwood Heights down to Oakwood Beach in Staten Island, continuing on a fairly straight course back through Midland and South Beaches before catching a bus back to Brooklyn. I’ll touch on this trip further in future pages, though I think I covered Midland Beach fairly comprehensively in 2015. The region varies, from gorgeous Victorian-era houses to empty, flooded lanes that were once more densely occupied until Hurricane Sandy hit them in 2012.

Two major roads link all these communities–Hylan Boulevard, which I generally avoid in my walks since here, it’s an endless parade of honking cars, fast food joints and shopping malls, and Father Capodanno Boulevard, which bruits its way through nothingness for most of its length, from Lilypond to Midland Avenues. Father (Vincent) Capodanno Boulevard was named for a Staten Island priest who won a posthumous Medal of Honor for his actions under fire during the war in Vietnam in 1967. I’m old enough to remember when it was called Seaside Boulevard.

At Seaview Avenue, traffic is controlled by massive stoplight stanchions, giving the intersection more of a western or midwestern look; at busy intersections, NYC stoplights are generally beefed up versions of the octagonally-sided NYC streetlamp, with a heavy mastarm supported by guy wires. For some reason the Department of Transportation is using these massive stoplights here. Could it be a pilot program? These seem too large to really make their home elsewhere, though I can see them being used on Linden Boulevard or Kings Highway in Brooklyn, which are also very wide streets. 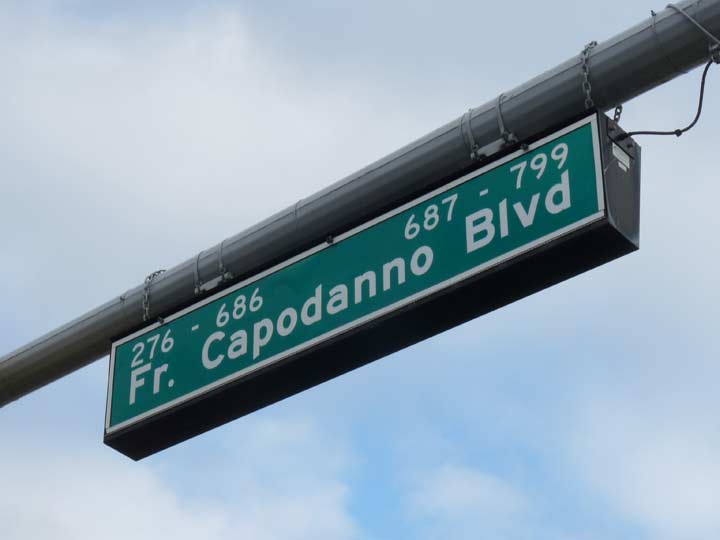 The mastarms are heavy enough to support illuminated versions of the large cross street signs that were introduced at busy intersections around 2005 or so. I like these! I suppose they’re too heavy to use on the guy-wired stoplights. They include nearby house numbers.

If memory serves me, the Seaview Ave signage hanging from the lamppost was indeed the first in the city to do so. States like CA and FL have had these type of signs for decades, but NYC didn’t try it until Staten Island Boro Prez Jim Molinaro suggested this after seeing similar signs while on vacation in Florida. Most major intersections in NYC now have these large green/white signs hanging from the mast, in addition to the usual smaller signs attached to lampposts/telephone poles that we’ve had for decades.

FYI, it’s Lily Pond Avenue (two words), not Lilypond, which is a common mistake in SI circles. And I too remember when it was Seaside Blvd, until the name change to Capodanno Blvd in 1977. Father Capodanno is on track for Sainthood, which would make him the second Staten Islander to achieve that exalted status (Saint Elizabeth Seton was likely born on the island, and spent much time here with her father Dr. Richard Bayley when he ran the Quarantine Station in Tompkinsville in the late 18th Century).

Finally, the old bus shelter at Capodanno Blvd and Sand Lane still has an “R2” bus stop sign that somehow was never taken down or painted over. The R2 became the S2 in 1978, and then the S51 in 1987.

I can’t tell but the signals themselves may be larger than standard. In the morning the sun is dead ahead of you. In the southwest, there is a shade plate around the signal in order to make it more visible.

I recall the late SI BP Guy Molinari was a big proponent in motivating the Parks Department to fix up the FDR Boardwalk/park areas and get South Beach reopened during the summer back in the late 1990s. Prior to that much of the area was deserted and abandoned and it wasn’t uncommon for sections of the boardwalk to catch fire on an annual basis. For example, if you walked down from Sand Lane to Seaview Ave on a July day in 1993, you were lucky if you saw a half-dozen people (mostly cyclists and joggers). 25 years later it’s not uncommon too see crowds out and about when the weather is nice. Lastly I think the boardwalk/beach fixups were a big factor in the construction boom that exapanded the residential populations of South Beach, Arrochar, Ocean Breeze and Midland Beach from the late ’90s until at least Hurricaine Sandy