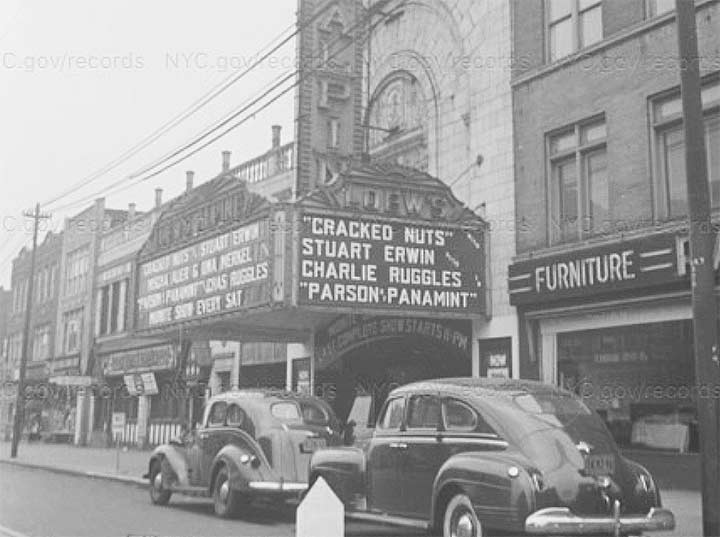 Here’s what was the Loew’s Alpine Theatre at 5th Avenue and Bay Ridge Avenue (69th Street) in 1941. The Alpine was opened in 1921 and was a movie theater from the start, though in the Silent Era it featured a full orchestra including an organist. A feature cost 15 cents, but you could book a whole day on Saturday or Sunday for a quarter. It was the first theater in Brooklyn without a balcony, but seated 2200 patrons regardless. It was never a vaudeville house, but a singer or instrumentalist would perform between screenings. By 1976 the Alpine had two screens and,  by 2015, eight. It lost its Loew’s sponsorship decades ago and is today run independently.

When I was a kid in Bay Ridge, I had my pick of the Alpine, the Dyker (86th Street), the Fortway (68th Street), the Bay Ridge (72nd Street) and the Harbor (93rd Street). The Alpine is the lone survivor of Bay Ridge’s once-many theaters. Among the features I saw here were “Yellow Submarine” (1968) and “Return of the Jedi” (1983–I waited on line in the rain for that one).

The day’s offerings were “Cracked Nuts,” about a lottery winner who gets mixed up with mobsters and a fake robot; Shemp Howard, without the other two Stooges, was in it. In “The Parson of Panamint” a preacher tries to tame a California mining town.

Out of the photo on the right was Paul Nielsen Furniture, which survived into the 1980s.

I saw a revival of the first and second James Bond pictures at the Loew’s Alpine….it was a second tier neighborhood Loew’s theater, as was the Kameo on Eastern Parkway and the Palace in Brownsville, which sat right behind the larger Loew’s Pitkin….The 86th Street Loew’s in Bensonhurst was a first run neighborhood theater. As was the RKO Dyker. in Bay Ridge

I don’t think I’m much older than you, but in addition to these wonderful theatres you name, I can recall the Stanley (next to the Lincoln Savings bank), and the Electra on the corner of 3rd Ave. and 75th Street, later Packers and then Bohak’s super markets. A double-feature at the Bay Ridge was 25 cents and I still have vivid dreams about that theatre. What a great neighborhood to grow up in.

Does anyone remember the “News From MGM Studios” weekly display in the lobby?