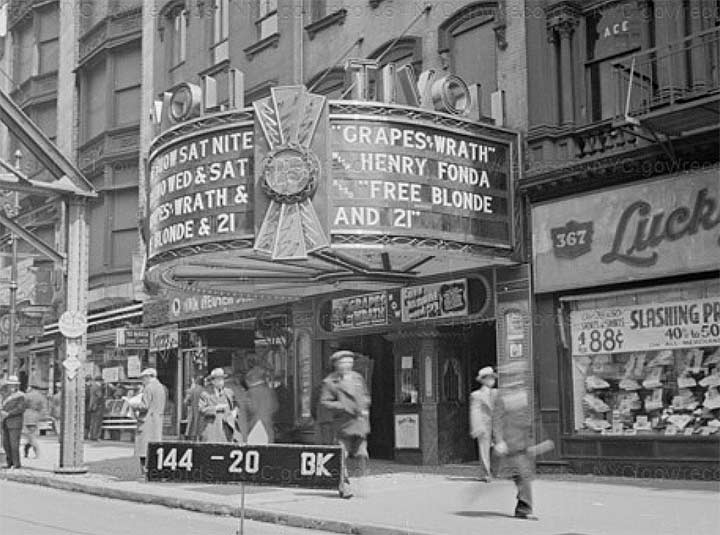 The Tivoli Theatre, formerly at 363 Fulton Street just north of Adams, had a magnificent semicircular marquee, with white letters on a black background. In this 1940 tax photo recently placed online by the NYC Municipal Archives, we see that Henry Fonda in The Grapes of Wrath was playing. John Steinbeck’s 1939 novel of an itinerant farming family in the throes of the Great Depression was committed to film by director John Ford, who won the Academy Award. Mr. Fonda continued to headline films into the 1980s. The second feature, Free, Blonde and 21, was a 1940 noir starring Lynn Bari.

The Tivoli opened on February 8, 1927 and closed in 1952, burning down in 1954. The block of Fulton Street on which it stood no longer exists, though a walkway traces its path on the east side of Brooklyn Borough Hall. All the buildings, and many streets in downtown Brooklyn, were demolished in the 1950s and 1960s to make way for Cadman Plaza, a number of housing projects, and the Brooklyn-Queens Expressway.

On the left, the pillars support the old Fulton Street el, which closed on this block in 1942. South of here, Fulton Street is today one of Brooklyn’s busiest shopping districts, though all but commercial traffic and buses were banned in 1979 as it became the Fulton Mall.

Downtown Brooklyn in this area was completely changed during the 1950’s and 1960’s.

Neat picture!!….Im old now and I dont even remember this theater…..My family usually hung out ,when shopping, around A and S, McCrory’s (Woolworth type store) and the 150 hot dog stands along Fulton Street back then….

I used to live in Bethlehem pa – they had a mcrorys down there! I’m glad to know they were up here too. The one down there closed decades ago. I believe they then became a newberry’s, which burned brown after an idiot set fire to it within the store.

McCrory’s was once one of the largest retailers in the US. They started out in PA and bought a number of other stores – McClellan and H. L. Greens by the early 60’s. They eventually bought J. J. Newberry’s and Otasco. The company that bought McCrory’s also bought Lerner stores. By the 80’s the parent company also owned the last of the S. S. Kresge stores ans S. Klien, among others. (Kresge’s were the stores that eventually became K-Mart.)

The guy who ran the parent company was really good at making money for himself. He managed to drive almost all of these retailers into bankruptcy while keeping control of their assets. The company had about 1,300 stores in 1989 and closed the last of them in 2002.

What is on that block right now?