I happened to be at Book Culture, a new independent bookstore on Jackson Avenue in Hunters Point, in March 2019 to attend a book signing: The Mets’ Art Shamsky and Erik Sherman’s After the Miracle, Art’s recollections of the Mets’ improbable 1969 World Series run — Shamsky was a big part of the team, clubbing 14 home runs and hitting .300. It was also a recounting of a recent meeting in California of several members of the team who have kept in touch over the years. Now in their seventies, some of the surviving players are having severe health problems, so all knew it may be the last time they all got together. For Mets and baseball fans, it’s a good recounting, but also a poignant read about the persistence of friendship.

The part of Queens in which the store is located is changing rapidly as glassy high rise office and residential towers are springing up like weeds after a spring rain. The city also wants to deck over two nearby railyards in Sunnyside and along the waterfront to build decks that will support dozens more. For years, though, the only glass tower was the green Citicorp Building, which lorded the sky all to itself.

The building, designed by Raul de Armas of Skidmore, Owings & Merrill, is handsome, even somewhat refined; its pale blue-green glass and transparent windows are obviously intended to reduce the impact of the vast tower on Long Island City, and to a considerable extent they succeed.

This building would be a lot more overpowering still if it had been sheathed in reflective glass, or garnished with ornament from top to bottom. And the shape – a tower with stepped-back corners that rises straight up for most of its height, with small setbacks at the very top to create a hint of a pyramid where the building meets the sky – helps a bit more in reducing the apparent bulk. NYTimes

The Green Tower stands on land once occupied by St. John’s Hospital, which teamed up with PS 1 (now a branch of the Museum of Modern Art) to form a one-two punch of venerable Victorian-era brick architecture in Long Island City.

The former Queens County Court House (now home to the Queens Supreme Court) has been in this location oppsoite the former hospital and now the Green Tower since 1870, and sparked a political dispute that led to the creation of Nassau County.

The first courthouse in this location burned down in 1904, and was replaced with the current Beaux Arts limestone structure in 1908 by architect Peter Coco. The famed 1925 murder trial of Ruth Synder (the smuggled photo of Snyder in the electric chair was a Daily News sensation in 1925) and the robbery trial of Willie Sutton, who robbed banks because ‘that’s where the money is’ were held here.

Coco was indicted on corruption charges a year after the new courthouse opened, and was tried and convicted in the very courthouse he designed.

Since the 1910s under a number of names, Brooks Restaurant served lawyers, court personnel and even defendants who were in the busy courthouse across the street, as well as hospital personnel and since 1989, workers in the Citicorp tower. I had been by the restaurant many times but till recently, the policy was to close it on the weekends and thus, I had never entered. The area has been getting busier with all the new construction, and the restaurant opens all week these days. 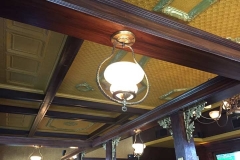 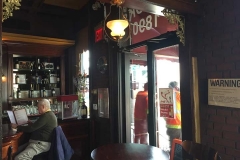 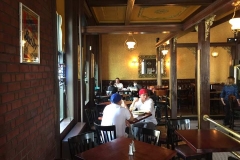 The restaurant is a delight to sit in and while away an afternoon with lunch and a couple of drinks. There’s a tiled floor, wood timbers, tin ceilings, and stained glass. The place is more spacious than the exterior seems to indicate.

The building went up around 1890 and was the Long Island City Hall before its conversion to a restaurant around 1910. The original proprietors were Martin Heilbut and Herman Kleefeld, whose interlocking H and K initials are preserved in stained glass above the bar. The tavern was known as  Kleefeld Hall, Kleefeld’s saloon, Kleefeld’s Hotel and Hielbut and Kleefeld, but in the 1920s it became the Court Square Restaurant. When it was purchased in the 1970s by Bill “Brooks” Gounaris, he named it for himself. Tragically, a previous owner had committed suicide.

I had long been under the impression that it was an expensive restaurant but this isn’t the case. Italian is a speciality and I ordered a salad followed by a chicken parm sandwich. Rigatoni, fettuccine, lasagna and linguini are on the menu in the $10-17 range. Steak and seafood dinners will run you $20-25. For lunch a variety of salads and burgers are available, $10-12. The beer list is generous. I liked Brooks and will return.

Thank the 19th century god that these cozy heavens still exist in a city where human scale is slowing being exterminated.

Gounaris did not name Brooks 1890 after himself. It was named by the previous owner, Robert Brooks.

The same people that run and own Casanova’s in Greenpoint run this.