DOWN BY THE SEASIDE, ALLEN STREET

I should really start paying more attention to Allen Street. The center median-ed Lower East Side route runs north from Division and Pike Streets to East Houston and 1st Avenue. However, 1st Avenue is one-way south, so northbound Allen Street traffic has to peel away at Houston to find another street to go north, which must frustrate cabbies. I think there was a time when all Manhattan numbered avenues had two-way traffic; I know 5th Avenue was pointed one-way south in 1966.

Allen Street assumed its present from in 1940, when the Second Avenue El was torn down. Between the 1880s and1940 the entire length of the street was covered by an elevated train. In 1931 the city demolished tenements and other buildings on the east side of Allen and created a center mall, which then deteriorated for over 70 years until it was spruced up with bike lanes, tables and seats. The west side of Allen still has many of the same buildings that el riders saw as they trundled along. A fascinating tableau of old and new.

El riders could probably see the top windows of 133 Allen between Delancey and Rivington, which at present is the Fujianese Church of Grace. Long before the church moved in, it was constructed as a bathhouse serving Lower East Siders who lived in cold water tenements.

The Allen Street bathhouse was built in the first decade of the 20th Century and featured two bathtubs and 49 showers for men on the first floor, with 3 tubs and 31 showers for women on the second floor. The Lower East Side was primarliy Jewish and so, the shower rooms in many cases became shvitzbuds or steam baths. Currents of hot, dry air were circulated at 8 feet above the floors that absorbed and carried away vaporous air, keeping the overall atmosphere clean while maintaining heat.

Tenements were “retrofitted” with more modern plumbing as the decades passed, and bathhouses began to die off. Allen Street’s bathhouse closed in 1975 and after years of dereliction, purchased by the church in 1992. 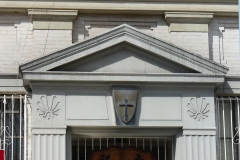 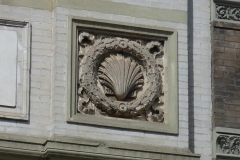 The bathhouses’ legacy has been retained in the scallop-shaped stylized figures at the entrance, and by the more realistic-looking scallops on the ends of the building. Bathhouses often used imagery mindful of water and what is found under water, as was done here.

There are two other former bathhouses in the neighborhood. Rutgers Baths, and Baruch Baths. As seen on Forgotten-NY.

Please note that First Avenue is one way northbound, and Second Avenue is one way southbound, since June 4, 1951. Second Avenue traffic, south of Houston Street, can continue straight onto two-way Chrystie Street, or it can zig-zag a block east on Houston to reach southbound Allen St. M15 buses follow the latter route. Northbound Allen Street, including the M15, continues straight onto First Avenue north of Houston St. without any interruption except for traffic lights.

The first one way N-S avenues in Manhattan were 9th and 10th, in November 1948, south of 65th and 72nd Streets, respectively. In 1966 Fifth and Madison became the final pair of major one-way avenues.