March 2019 marks Forgotten New York’s 20th anniversary. To celebrate the occasion, I’ve re-scanned about 150 key images from the early days of FNY from 35MM prints. In the early days, when people including me were accessing FNY with dial-up modems, I had to save photos really small — in some cases, just 4″ across. I couldn’t find all those early photos — I think I foolishly discarded some along the way — but all month, and into the spring, I’ll be picking out some and showing the newly scanned versions.

In downtown Brooklyn, Flatbush, Atlantic Avenue, and 4th Avenue all come together at a triangle called Times Plaza after a newspaper, long defunct, that had its offices nearby.

In 1908 this was considered a remote redoubt indeed as far as the IRT Subway was concerned. It was that year that the original subway, which had expanded uptown into the Bronx via elevated between 1904 and 1908, made its first Brooklyn foray, opening stations between Bowling Green and Atlantic Avenue in 1908 — and it’d be 12 years again until the IRT pushed east and south to New Lots and Flatbush, though the BRT and its successor BMT set about building new lines and converting steam railroads in Brooklyn in the interim years.

In some stations considered worthy of special emphasis, original subway contractor Heins & LaFarge, who were responsible for the original IRT’s Beaux Arts and rococo touches, built freestanding entrance buildings, in railroad parlance called “headhouses.” Some of these, at Bowling Green and 72nd Street, are still standing, as is this one in the triangle at Times Plaza.

In its original scenario, Brooklyn’s 5th Avenue El ran down Flatbush Avenue, but this building stood alongside it. I first encountered it in the 1960s on bus rides with a parent on the B63 bus, which ran down 5th Avenue and Atlantic, winding up on Furman at the waterfront. By then an extra building hosting a hot dog stand had wrapped itself around the building, as seen on this FNY page, but I’ve recently come across older photos that prove it was surrounded with such excrescences as early as the 1920s. The el came down in 1940.

After the wraparound stand was eliminated, though, the station continued to slide into decrepitude. The Beaux Arts Long Island Rail Road station across the street, built in 1907, also deteriorated until by the 1990s the building was demolished entirely and access to the LIRR was via the subway entrances.

Things began to perk up when developer Bruce Ratner’s Atlantic Terminal shopping center, featuring Brooklyn’s first Target, opened in the late 1990s; a new LIRR terminal building followed. Off to the right of the photo, you can see the Underberg kitchen supplies building at Flatbush and Atlantic; after a protracted land-use battle, it toppled by 2010 and was replaced with the rusty-appearing Barclays Center in 2012. The Pacific Park housing project, which no longer has Ratner as its developer, is set to rise over the trainyards in the next decade.

As for the headhouse itself, it was renovated to what we have today, a glorified skylight. The MTA eliminated subway entrances in the building as part of its rebuilding process, rather than subject commuters to the pedal-to-the-metal traffic on the street surrounding streets. 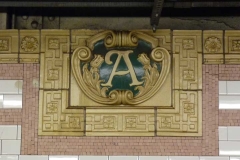 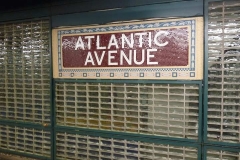 The Atlantic Avenue IRT station serving 2, 3, 4 and 5 is like a time capsule preserving tiled signs and terra cotta cartouches from the subways’ early days.

In the 1960’s my uncle had the newsstand that adjoined that building. When my family was returning home for the night, I remember my father stopping to pick up the “bulldog edition” of the Daily News.

The terra cotta “A” in the photo above contains swastikas – but since the station was opened in 1908, well before the swastika was forever ruined by Hitler, the designers probably meant for the shape to recall the Sanskrit version of the swastika, which was a universal symbol of good fortune.