I have been walking quite bit in the warrens of lower Manhattan lately, noticing what others ignore. I revisited Nassau Street in SpliceToday a short time ago, and took care of Cortlandt and Dey Streets in FNY a few months ago. There’s a lot to take in from sculptures, names on buildings, historic plaques, that kind of thing. Perhaps by the end of the year, I’ll have comprehensive synopses on all of the short streets at the tip of the island.

One of these streets has always eluded me. Like many of downtown’s narrower routes such as Gold Street, constant construction and building rehabilitation has put sidewalk sheds on top of them, leaving them dark and inhospitable for picture taking. Dutch Street, a one-block path from John north to Fulton east of Nassau, has been nearly completely shrouded by construction sheds for the better part of a decade. On a recent downtown foray, lo and behold there it was in the sunshine, or what little sunshine the behemoth buildings of Lo-Man permit.

According to Sanna Feirstein in Naming New York (she’s right about more streets than the late Henry Moscow is in The Street Book) Dutch Stret was named for the Old North Dutch Church, which was at the corner of William and Fulton from 1769 to 1875; the name shows up on maps as early as 1789. (Moscow merely says it was named for the Dutch colonizers of New Amsterdam.) 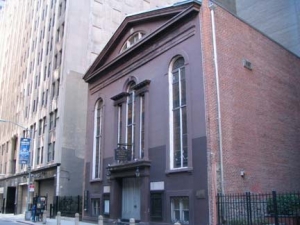 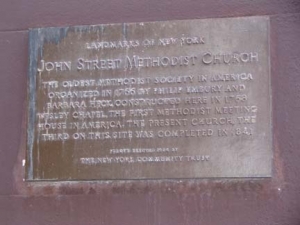 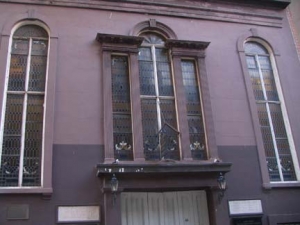 Though it isn’t exactly in the line of Dutch Street, there’s a very old building on John Street a stone’s throw away that bears mentioning…

John Street United Methodist Church, the third iteration of a church began by Irish Wesleyan Methodists and first constructed in this site in 1768. This church building (1841) is older than the present Trinity Church building at Wall Street and Broadway, but not as old as St. Paul’s Chapelon Broadway and Fulton Streets (1766). Philip Embury was the founder of the first Methodist society in North America.

A slave named Peter Williams was one of many African American members of Philip Embury’s society. He became sexton of Wesley Chapel and, with James Varick and others, formed what later became the Methodist Episcopal Zion Church.

In 1817 the chapel was torn down to make way for a larger structure, dedicated in 1818. A third (and smaller) edifice was erected in 1841 and is still in use today. [United Methodist Church]

The front entrance at #1 Dutch Street is a new addition to an otherwise elderly office building, #45 John, built in 1908 and converted to condos a century later. Rents begin in the mid-3000s, which sounds like a fairly reasonable price for Manhattan.

Fairly old examples of Downtown Alliance black-and-white street signs featuring a representative photo and house numbers. Newer examples are in upper and lower case. These signs first appeared around 2000 — I like the design so much I wished they could have been rolled out citywide. For example, Bay Ridge signs could have a picture of Fort Hamilton, while midtown signs could sport the Empire State Building.

#7 Dutch Street is the oldest remaining building fronting on Dutch Street. The ground floor was formerly a restaurant (see below).

The Downtown Little School is a preschool that has been on Dutch Street since 1999. The building it’s in appears to have been built in the 1950s or early 1960s.

Dutch Street looking north toward Fulton. The canopies at #1 Dutch serve to partially illuminate the street.

What appears to be an address on the east side of Dutch Street is actually part of #104-106 Fulton, which wraps around the corner.

I couldn’t resist a peek at the Municipal Archives shots of Dutch Street. Things were much livelier in 1940, with establishments like the Fulton cafeteria and the Dutch Street Bar & Grill. Perhaps on a dark overnight, some ghosts of the barflies that propped up the bars haunt the narrow lane.

A look at #7 Dutch Street in 1940. Try as I might I could not get the name of the restaurant in focus. Though I’d’ve liked to be one of the photographers on this project had I been around in 1940, they weren’t using any budding Ansel Adamses.

My ancestors, john and Belinda Gatfield lives around the corner and were active members of the Methodist Church in John Street, as was their maid – Sojourner Truth.

WOW!!! the library at my College, SUNY New Paltz, is named after her. Crazy!

I think I make out “ROYAL” in block letters above the restaurant door. Also appears to be in cursive on the right window.

It appears to say bakery to the left of royal

Many photos of old NYC were taken by Herbert Flamm a polio victim and even older photos Eugene De Salginac.

The 1940 and 1946 Manhattan telephone directories list Royal Restaurant at 43 John Street, which is around the corner from 7 Dutch Street. Tax maps, as well as the maps included at https://mediahistoryny.wordpress.com/dutch-street/, show those two addresses as being joined like one angled structure. The 1940 Tax Photo for “41-43 John Street” shows a storefront between a hat shop and Windsor Restaurant (which the telephone directories list at 45 John Street) that could be the John Street entrance to the Royal Restaurant. The awning may say “Royal” in the center. That would make 7 Dutch Street the back entrance.

Wikipedia (https://en.wikipedia.org/wiki/Sojourner_Truth) makes no mention of Sojourner Truth being a maid in Manhattan. She was a famous abolitionist and women’s rights activist, and has many memorials named for her in Ulster County.

It’s states Bakery Royal Restaurant. I found the other tax pictures of 1940.

What is the little area with the statue in it?

Per Wikipedia, in 1806, the original William Colgate & Company produced starch, soap and candles on Dutch Street.