I have always considered the massive concrete arches that lift railroad tracks to the Hell Gate Bridge over the streets of northwest Astoria almost as imposing as the arch bridge itself. Tracks, arches and bridge were constructed from 1914-1917 and connect Pennsylvania Station, the Sunnyside Yards, and southern Queens with the northeast United States. Presently, Amtrak passenger and fright trains use the Hell Gate to cross from Astoria to Port Morris, Bronx via Randalls Island.

I don’t know why the builders decided to use massive concrete arches on some streets, and iron trestles on others. The westernmost of the arches, and the highest one, can be found on 29th Street one block west of the Astoria elevated carrying the N and W trains (indeed another such arch spans both the elevated train and 31st Street, a feat accomplished by building both concurrently). I have always found it irresistible for the camera.

Artwork by Jorge and Marthalicia Matarrita honoring Astoria’s Greek-Americans can be found facing the sidewalks under the arch. This panel depicts Poseidon and his trident, Zeus and Hera, and Hades with his watchdog, the three-headed Cerberus. 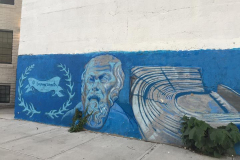 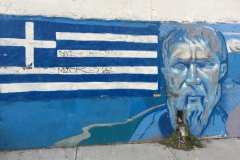 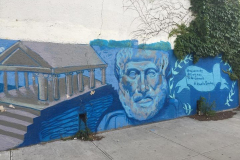 Across the street, more panels show famed Greek philosophers, an amphitheater, temple and a Greek flag.

Next to the arch, the Greek Stathakion Center is described as “a community center with theatrical stage fully equipped with lights, sound, video projection and other accommodations for live performances and cultural functions on the second level and a performance, meeting hall on the main level.” The Greek-American Folklore Society is located here as well.

You know what, I had never thought before to stand on a street under one of these massive arches and aim the camera up at its underside. This is what it looks like from that angle.

On the corner of 29th Street and Ditmars Boulevard, a building entrance is inscribed “Singer Apartment.” Practically no one in Astoria knows that the name denotes a bit of Astoria history, but it has nothing to do with Singer sewing machines.

Before the current Queens street numbering scheme was adopted in dribs and drabs mostly in the 1920s, Astoria’s streets passed through a variety of names. 29th was Lawrence Street but it was also Singer Street, and that’s where the building name comes from.

Is it possible that World War I caused some steel shortages?

So, what’s within those massive, seemingly solid arches? Is it steel with a non-structural concrete facade?

No, it was solid concrete (with rebar support), You can find historical photos of them being built ising HUGE wood framing for the arches and just building it up to the top. Iy did have to include drainage holes and internal electrical under the arches, and I think these are what give way to a lot og the water damage that we are now seeing 100 years later.

The Greek Center was originally the Singer Street Synagogue.

nice article but you should have taken a picture of the wall of ivy.

It is on the side opposite the center.

I agree that the arch above 29th Street is very imposing, and it’s sad that it’s not well known by people not familiar with this part of Astoria. In the last decade my wife and I have discovered a few excellent restaurants in the immediate area, so we often park on 29th Street when we are there, often it seems right under the arch or close by. Most likely, when the Amtrak viaduct was built (originally it was the New York Connecting RR, a jointly owned adjunct of the Pennsylvania and New Haven RRs) the surrounding area was mostly vacant land, as the BMT elevated on 31st Street also reached this area in 1917. So there were no NIMBY-types to protest the building of the viaduct through the area. If anything, it’s quite a landmark in an otherwise low-rise area.

Just a minor correction – the freight trains that cross the Hell Gate Bridge are CSX Railroad, and use a single track that is segregated from the double tracks Amtrak trains use.

Thank you for this article about the arches that connect to my favorite bridge. Every time I read or hear someone say “Hells Gate” it’s like nails on a chalk board.

I worked for the MTA (power/electrical) and I’m pretty sure, mostly from things I’ve read and learned from older workers, that parts of the train/subway/railroad lines built between, say 1913-1918 we’re done in concrete/cement/mortar due to steel shortages during the 1st world war, as steel would have been needed and allocated to construct more naval ships, military vehicles, weapons, ammo, supplies, early versions of tanks and other “toys” of death and destruction, and we all know politicians get hefty kickbacks from the construction of those war “toys”, so you can guess how infrastructure took a back seat to what was “important” to the political (pocket lining) agenda of the day! (and it still does!)

They say the G.W. bridge was supposed to originally be covered in concrete to give it a “finished” look, but the budget and WWII wouldn’t allow it’s completion, so we all got to look at it’s incomplete “skeletal” form for decades. lol

So, maybe some trestles around NYC were left as bare iron when cementing would have been too costly and some were cemented when iron wasn’t available!?

I’m a Staten Island native (born/raised here), if you come on over and see our “abandoned” -(since @1960) and “forgotten” North Shore railroad system, you’ll see that the line was built at/on ground level right from where it left the S.I. Ferry station over in “St. George” up until it reached the few elevated trestles of the line that started and ended in “Port Richmond” -(my “hood”).

The 1st elevated trestle is right near/at/over “Richmond Terrace” -(we natives just call it “The Terrace”)- between “Heberton” and “Park” ave’s. there’s a big empty plot on the northeast corner at the end of Park ave. where it meets the Terrace, that’s where the former “Sedutto’s” family owned ice cream factory stood for over 90 years.
The factory was right between the Terrace and the elevated train tracks behind it, till it all closed down in the early 00’s, than later burned down and than was finally all torn down just a couple summers ago.

BTW, it was only a few feet from where the entrance to the former “Bayonne Ferry” was -(that closed @1959 once the Bayonne Bridge opened and nobody rode the boat anymore) which was right next to where the “Wiseglass” race track was (and that closed @1974) which was between the Terrace and the waters of the “Kill Van Kull”.

Than the rails went right back down to ground level as it reached the area right behind “Port Richmond High School’s Football field just past “Nicholas” ave and as it headed to adjacent “Elm Park” and than went west through “Mariners Harbor”, “Howland Hook” (Where the “Staten Island Tigers” pro-baseball team once played and abandoned field still is) and “Port Ivory” (named for the “Proctor and Gamble” soap product that was made at the now long gone P&G plant that closed back in 1985.
Those buildings all burned down at least 20 times and were all finally knocked down maybe ten years go).

Than it headed on it’s way all along down the west shore heading south to the “Tottenville” Train station -(also the where the long defunct Tottenville Ferry was. It suffered the same fate as the former Bayonne ferry, the Tottenville ferry went broke once the Outterbridge was constructed and opened)-, anyway, you’ll notice that the few elevated trestles were all cement and all in Pt Rich.

They no longer even show the “N.S.R.R.” line on S.I. maps nowadays either and that’s pretty sad, too.

I don’t think the war had much effect on the construction of the New York Connecting Railroad. You have to remember that none of the combatants expected the war to devolve into a years long catastrophe. The Railway Age Gazette issue of November 13, 1914 has an article entitled” The Construction of the New York Connecting Railroad”. The photos and text show that construction was well underway. Photos show the concrete piers completed in the Bronx and Astoria with the plate girder trusses being erected on the Bronx side. The concrete pier and plate girder truss support was used because the more desirable construction ( solid concrete arches ) could not be supported properly. In most cases on Randall and Wards Islands the piers had to rest on hard pan. In Astoria the piers were resting on gravel and sand. Solid concrete arches would have required support on bedrock. The bridge abutment on the Astoria side had bedrock about twenty feet below the site. The Wards Island site presented tremendous problems because bedrock was between 58 to 120 feet below the ground surface. The erection of the arch span was expected to begin in early 1915.
The arches that begin at Lawrence Street are constructed of reinforced concrete. The walls are three feet thick at the top, 57 feet apart. They are connected by concrete walls every 70 feet. When the walls were completed, a narrow gauge railway was installed that brought fill from the Sunnyside rail yard excavation. The fill was compacted in thin layers so as to exert no lateral force on the walls, so the walls are actually a facing for the fill rather than true retaining walls. (You can see some structural problem at the 38th Street arch. Tie rods and turnbuckles are holding the walls together.)

I thought the Greek Center looked like a synagogue design, with the main entrance a flight above the street. Many older synagogues are built that way.

I was told a while ago by my family, who were long time residents of this part of Astoria, the tracks were designed with concrete in order to prevent patients from a nearby psychiatric facility from climbing and escaping. The only type of facility nearby during the construction of the New York Connecting Railroad is on the site of where St. John’s Prep currently is. I’m not sure how accurate this is as the reason why it was designed this way but it’s what I have told.