Baxter Street begins at NYC’s more infamous precincts (for two separate reasons over the years) and runs generally north and northwest to Grand, where it ends at the old but long ago condo’ed NYC Police Headquarters. Baxter begins at Worth Street at the Louis K. Lefkowitz State Office Building. Both streets did not start out with these names. Worth had been Anthony, and Baxter had been Orange.

But the neighborhood in which they crisscrossed, Five Points, had gained such a deserved reputation of danger and crime that when the neighborhood was finally wiped out by the construction of new courthouses and Columbus Park (seen here on this FNY page) beginning around the turn of the 20th Century that most of its streets were renamed, Anthony to Worth, honoring the War of 1812 and Mexican War’s General William Jenkins Worth. He is buried in a cemetery consisting of one person at 5th Avenue and West 25th opposite Madison Square, and also honored in name by Fort Worth, Texas.

Orange Street, originally named for the colonial-era ruling Dutch House of Orange-Nassau, was renamed for Charles Baxter, a state legislator who volunteered to serve in the Mexican War , becoming a lieutenant colonel, and was killed in the Battle of Chapultepec.

The Louis J. Lefkowitz NYS office building was constructed from 1928-1930 and has ben home to a number of offices over the years including New York State Departments of Taxation, Finance, and Motor Vehicles, and at present, the NYS Marriage Bureau. It was named for NYS’s longtime state attorney general (1904-1996). Presently, the building is on the endangered list as Mayor De Blasio wants to use the space for his ‘neighborhood jail’ plan that includes closing Rikers Island.

Lined up in a row along Baxter are criminal courts and houses of detention, in what can be called “Correction Row.” This has been the case since 1838, when the first of the buildings known as “The Tombs” was constructed. The original Tombs was the setting for the last scene of the Herman Melville classic short story “Bartleby the Scrivener.” 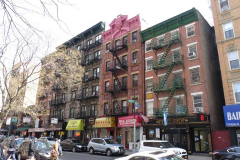 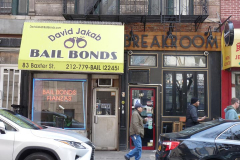 The east side of Baxter Street facing White Street looks largely the same as it did a century ago. There are a number of bail bonds places serving defendants. A restaurant at 83 Baxter is amusingly called Breakroom, for a place often found in courthouses. 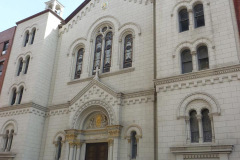 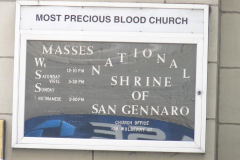 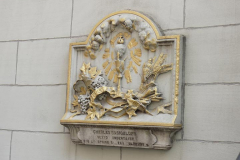 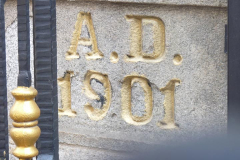 I wonder if people from countries where Catholics are rare wonder about the names given to Catholic churches, such as this doyenne on Baxter Street north of Canal, Most Precious Blood Church. The name comes from the blood shed by Jesus Christ in the runup to his crucifxion, when He was tortured by the Romans who placed a crown of thorns on His head and stuck a lance in His side.

This church is the headquarters of the Feast of San Gennaro in September which takes place on Mulberry Street, punctuated by a procession in which a statue of the saint is carried around the streets of Little Italy. Though the AIA Guide to New York City claims an 1890 construction date, the cornerstone disagrees, stating 1901.

The exterior of the church is punctuated by a bas relief labeled “Charles Bacigalupo, sexton, undertaker, 208-210 Spring Street, 26 1/2 Mulberry Street.” 26 Mulberry, on the corner of Mosco, is now the Wah Wing Sang Funeral Home. Bacigalupo originally ran the funeral home, as well as others in the area, as was a familiar and revered figure in Little Italy in his day.

From Genoa, he founded the funeral home in 1888 and quickly because famous in his trade. He had four branches in the area, as well as stables for his horses. He reportedly drove the second carriage in the funeral of Ulysses S. Grant. A charitable man, he buried many poor souls at his own expense, making himself beloved by the local population. He is also credited with introducing dirge music to Italian-American funerals in New York.

He died in 1908. The Times wrote, in a rather long article, “Charles Bacigalupo, who for thirty years has buried the rich and poor of Mulberry Bend and Chinatown, was himself buried yesterday, and no funeral of such a scale of grandeur has ever been offered to the reverent if color-loving and emotional people of that section. Bacigalupo died in Brooklyn in one of those comfortable, old-fashioned mansions in Second Place… There were more than 200 carriages and seemingly endless processions of Italian societies with banners draped in crepe and bands sonorously sounding dirges that kept the mourners’ tears welling to their eyes.

“After the services at the house the coffin was brought to the hearse—not the famous automobile hearse, but the finest that was ever built to go behind horses. Then six jet black horses, draped in white netting that flowed over the pavement, started toward the Brooklyn Bridge with six attendants holding their bridles. Behind the hearse were nine open carriages piled high with the flowers that the dead undertaker’s hundreds of friends had sent.” [Lost City]

Bacigalupo was so famed in his day that his name, pronounced by Little Italy denizens as ‘bacha-ga-LOOP” entered the vernacular, but probably not in a way that the undertaker would be proud, as it came to mean a buffoon and a fool, punctuated by its use in Abbott and Costello routines and Louis Prima comedy songs.

At 121 and 123 Baxter Street are two different centuries’ examples of residential housing. One was built with a storefront, while the other was built with both retail and a parking garage on the ground floor, as well as baclonies facing the street on all floors. 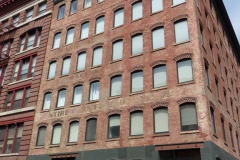 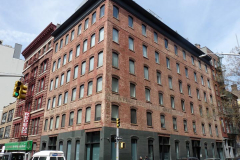 I’m fascinated with this stolid brick factory building at 136 Baxter, on the corner of Hester. Readers of FNY may know I’m a fan of brick buildings like this one, former factories or warehouses converted to condos. That happened at this building in 2007, which was named the Machinery Exchange since after its 1915 construction, it served as machinery storage as well as stables for police horses just south of the old NYPD headquarters on Centre Street, itself converted to residential in 1984. Looking carefully, you can see painted lettering on the building that formerly identified it but it’s too faded to be understood now. 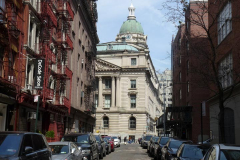 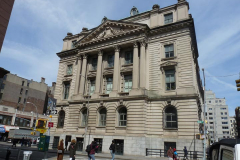 The most recognizable building on Baxter Street is the one at its northern end, the domed former NYPD Headquarters, 240 Center Street, located in a wedge between Centre, Grand, Broome, and Centre Market Place. Currently a super-luxury apartment building called Police Building Apartments, it was designed by Hoppin & Krohn and completed in 1909 just as the Beaux Arts movement was beginning to wind down and modernism was around the corner. The lions in front look rather more fierce than the two at the New York Public Library – as befits Police HQ. It was converted to luxury use in 1988, a very early harbinger of the luxe trend that would take hold in Soho in the following decade.

The building on the northeast corner of Grand and Centre Market Place is home to one of NYC’s longest-lasting taverns, ONieal’s (the official Irish spelling deprives it of an apostrophe), was established as Callahan’s around 1880. After the NYPD HQ went up across the street a tunnel was dug from the HQ to this bar for easy undetected access for cops and NYPD brass; part of it is now ONieal’s wine cellar. There was an upstairs brothel at one point, and the place continued to run as a speakeasy during prohibition.

The NYPD HQ was retired in 1973,but the bar soldiered on and was purchased by its current management in 1996.

Another stolid red brick masterpiece at the NW corner of Broome Street and Cleveland Place. The street layout of Little Italy is a little more complicated than you’d think. For example until the early 20th Century there were no Kanmare or Lafayette Streets; these are ‘new’ streets created to deal with the automobile, with Kenmare bringing traffic from the Williamsburg Bridge to Lafayette, and Lafeyette extended south from Lafayette Place in Cooper Square south to the Courthouse district near the Brooklyn Bridge. South of Spring Street, Lafayette is simply a renamed Elm Street.

Meanwhile, a short street named Marion ran from a dead end north of Prince south to Broome at the north end of Charles. When Elm Street was renamed Lafayette, so too was Marion: it was changed to Cleveland Place, in honor of Grover Cleveland, elected President in two nonconsecutive terms, 1885-1889 and 1893-1897. The names were changed about 1907.

97 Kenmare, on the corner of Cleveland Place, is one of the most unusual buildings I’ve ever seen. It’s on a tapering plot, 100 feet long, 20 feet deep on its east end and just three on its west side! Much ink has been spilled about 75-1/2 Bedford Street in Greenwich Village, which is 9 and a half feet wide, but this building beats it by 6 and a half feet at its narrowest! Since 1982 the space has been occupied by an art gallery and exhibition space, the Storefront for Arts and Architecture.

How did the building get this way? A 1940 photo from the NYC Municipal Archives shows it looking pretty much the way it looks today. I can’t find much online, and don’t have time to look today, but my suspicion is that there was once a larger building in the plot that was severely compromised when Kenmare Street was bruited through in the mid-19-ohs.

17 through 23 Cleveland Place are currently the only addresses on the street. The building on the left, 21 Cleveland, is particularly detailed. These buildings were once part of Marion Street. 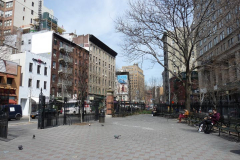 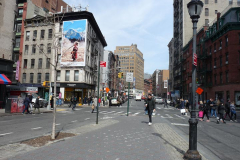 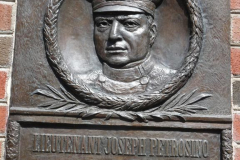 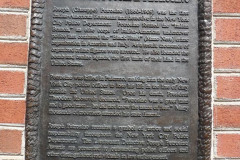 When he joined the Police Department in 1883, Petrosino was the city’s shortest officer, at five feet and three inches tall. Police Commissioner Theodore Roosevelt personally promoted him to Sergeant of Detectives in 1895. While investigating anarchists in the United States, Petrosino warned President McKinley of threats against his life; however, the warning was not heeded and the President was assassinated in 1901.

Within ten years, Petrosino was named lieutenant and given command of the new Italian Squad, a unit created to combat the crime organization known as the Black Hand. Under his leadership, several thousand arrests were made, and more than 500 offenders were sent to prison. Crimes against Italian-Americans dropped by fifty percent. Petrosino was killed while on assignment to Palermo, Sicily.

When his body was returned to New York, thousands of mourners formed a funeral procession which marched from Little Italy to Calvary Cemetery in Queens. Lt. Petrosino was the only New York police officer who had died in the line of duty outside the United States. The park named in his honor is located just north of the Renaissance Revival edifice at 240 Centre Street, which served as Police Headquarters from 1910 to 1971. NYC Parks

Petrosino Park has been closed and reopened for reconstruction at least three times since I started Forgotten NY in 1999, and work will probably continue until Parks is satisfied with it.