Two war veterans’ monuments, erected in 1927 and 1989, face each other across Rockaway Beach Boulevard between Beach 94th and 95th Streets on the peninsula.

One of a number of World War I monuments depicting the rank and file soldiers known as “doughboys,” the Rockaway memorial is according to Kevin Fitzpatrick [World War I New York] the one closest to France, where most of the US’ casualties were taken. The sculpture by Joseph Pollia was dedicated on November 12, 1927 in what was then a traffic island on Rockaway Beach Boulevard; it was moved to the boulevard’s south side when the approaches to the Cross Bay Bridge were added in 1967. 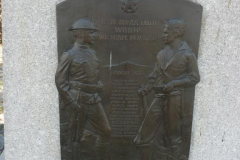 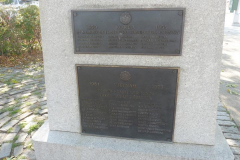 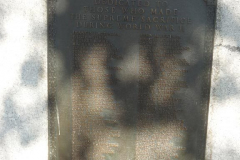 In addition to the original honor roll plaque, sculpted with a sapper and a sailor with the 17 peninsula men who perished in World War I, other plaques have been added with subsequent conflicts: WWII; Korea; and Vietnam. I imagine there will be a Gulf/Iraq Wars plaque if any soldiers from the Rockaways died fighting those wars. (We never run out of plaques; hopefully, someday, we’ll run out of wars.)

To my knowledge, the only memorial for women veterans in NYC stands across the WWI memorial on the south side of Rockaway Beach Boulevard. It was dedicated in 1989 and is the work of sculptor Eileen Barry. Commissioned by American Legion Post 272 in Rockaway Beach, it was originally going to accompany the Doughboy across the street, but the NYC Art Commission rejected the idea, claiming Barry’s work was insufficiently “artistically strong.” It was located across the street while the city was supposed to find an alternate location, but it seems to have found a home here.

” I imagine there will be a Gulf/Iraq Wars plaque if any soldiers from the Rockaways died fighting those wars.”

True story: a few years ago I was driving through northeastern Iowa when I stopped in the small town of Waukon to get something to eat. While walking around the center of town I looked at the war memorial in front of the Allamakee County courthouse. One of the names on the memorial plaque was that of a serviceman who died in the 1983 invasion of Grenada.
There were 19 US deaths in that mini-war, and Allamakee County has a population of less than 15,000. Those are some pretty long odds.

You have the wrong war, only one soldier from there died in Grenada. You are likely thinking about Greensburg, PA which had 13 Army Reserve soldiers killed when their barracks was hit by parts of an Iraqi missile.

According to wiki, 19 US service men died in the fight for Granada.
Unless you want to discount the 4 USN SEALS who died doing a HALO jump and many others.

That wasn’t what I meant, I was talking about that exactly one person from that county died in Grenada…what the person likely was thinking of is the county in Pennsylvania which saw 13 Army Reservists killed and 53 or so injured in Operation Desert Storm: the single worst loss of life from any US unit during that conflict. It’s likely a blending of the two memorials together in his memory by accident…

Yes, to paraphrase what they said.

Not sure about a monument to women.
When I was in Vietnam didn’t see any American women there……

Eight military women died in Vietnam…they were there at all of the major hospitals and most front line hospitals. Hopefully you were lucky enough to not need hospitalization so didn’t see them

8 women vs 50,000+ so we put up an equal number of statues?
yes they were in the major hospitals all nicely air conditioned with real food and water. Not like wading through leech/snake infested waters.
sorry this PC stuff makes me sick. eventually they will rewrite the mercury program so it was 7 women astronauts.

Yeah…& they were all trans & pregnant, too. PC is nothing more than the normalization/weaponization of pathology.