I have referenced Child’s Restaurants often in Forgotten New York; the former chain was still active when I was a kid and perhaps even into my young adult days, since I remember a Child’s in the Times square area in the early 1980s when I was wandering around one day. I composed an entire page of former Child’s locales: most are distinctive because of their use of terra cotta to depict oceanic images like flying fish, sea horses and King Neptune. A magnificent Child’s flagship on the Coney Island boardwalk depicts hundreds of seafood images.

On that page, I noted the history of the chain:

The Childs restaurant chain was the creation of Samuel and William Childs. They revolutionized the American restaurant chain by creating a uniform look to each of their branches in order to make their restaurants recognizable. Their “brand” relied heavily on the portrayal of their establishments as sanitary, clean, and modern; the interiors were outfitted with white tile floors and walls, and even the waitresses and other workers dressed in white uniforms. The Childs brothers were also the fathers of the modern cafeteria, influencing another bygone NYC chain, the Horn & Hardart Automat. They would probably bristle if you compared them to McDonalds or Burger King, as the fare was more upscale than that, but it wouldn’t be outlandish to compare them to, say, the old Howard Johnson’s chain.

Child’s Restaurants peaked in the 1920s and 1930s, and William Childs lost control of the company after a revolt from investors after he imposed his own vegetarian preferences on the menu. Child’s became the Hotel Corporation of America in 1955 and was acquired in 1961 by the Riese Organization, which today operated restaurant chains like T.G.I. Friday’s and Applebee’s.

According to an article in the Sunnyside Post a few years ago, developers have their eye on one of the more prominent ex-Childs restaurants, a classic at Queens Boulevard and 60th Street. As luck has it I photographed this building in mid-March 2020, on my last foray outside my Little Neck-Douglaston-Great Neck environs before the Coronavirus Crisis struck.

Not only would the old terra cotta design go, but it would also spell the end of a fine example of mixed uses that has been the norm on NYC streets for over a century. I’ll explain that but first, have a look at the gorgeous terra cotta work that hasn’t faded a bit in the near century since its installation:

Beige and green fish and shell.

Child’s restaurants were known for this seahorse-and-trident motif. There is some artistic license because sea horse tails are prehensile, missing the tail fins of other fishes. 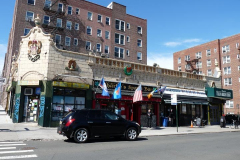 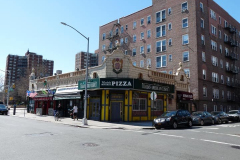 Though the Child’s restaurant closed in this building decades ago the old facade now supports a number of businesses: a laundromat on the Queens Boulevard side; a corner bodega ran by the Shriji Corp. on the corner; on 60th Street, an Irish pub (judging by the shamrocks) Charlie’s Sports Bar; and the Woodside Pizza Restaurant with a slice joint on the 60th Street side and a sitdown restaurant on the 44th Avenue corner: many pizzerias in NYC have this arrangement, notably L&B Spumoni Gardens in Gravesend.

This sort of mixed use is dying out in NYC, as developers have deemed it to be declassé. As the article says, ‘Winzone Realty, is pitching the location as a “Prime Area For Hotels, Long Term Residence Hotel, Buildable Condos/Retail Space.”’ Thus, what would go there is supposed to be a single use condo building, presumably with its own laundry room, and the people who patronized the bodega, pub and pizzeria are not thought important enough and would have to drink beer and eat pizza elsewhere, making room for richer residents of whatever high rise condo goes there.

Between the mismanagement of the COVID-19 outbreak which is causing huge economic hardship, & the NY state Legislatures imposition of the “no bail” law, the NYC exodus will accelerate. Therefore any plan to build an upscale condominium, or whatever, in Woodside is probably DOA. True progress isn’t possible where progressives rule..

I believe that urban recovery, not just in New York but in other cities too, will depend on whether companies continue to allow working from home after condiitons return to normal.

“Redstaterefugee” is always posting the same nonsense. Has he changed anyone’s mind here? Has anyone here considered leaving NY as a result of his comments?

They already did: they’ve rented houses in Westchester, Connecticut, & Woodstock. they’re able to work from their new homes ( NY Post article last month). They won’t return. NY had a net population loss last year. Florida surpassed NY in population long ago; do you think that FL ‘s no income tax law has nothing to do with it? The “no bail law” guarantees a continuous crime wave. Progressive policy makes life progressively worse for the average citizen who eventually votes with his feet. Your attitude is so typical & over time I realize that my decision to discover America was the best decision of my life. Dasvidiniya, comrade. Enjoy “staying safe”, & don’t forget your mask.

Amazing how the Terra cotta work is in such good condition after all these years.

That’s because it might not be terra cotta. That has yet to be addressed by any of the people identifying these buildings as both Childs and as terra cotta. There is no historical or preservation evidence of either.

Another loss in Queens is the former Studebaker showroom on the North East corner of Northern Blvd at 45th Street. The distinctive facade was being covered the last time I drove by there.

We almost lost the Astoria Childs on Bway in Astoria a few years ago. It is still there,-last I saw it was a variety store and all the decoration was in good shape.

My late mother-in-law worked for the Riese organization for many years. When I first met my wife-to-be, she referred to her mom’s employer as Child’s, not the Riese organization. I remember that my mother-in-law wrote checks by hand using her very good penmanship, and entered the data in a ledger book. If she were doing this work today, she would have a computer terminal at her desk and probably use an excel sheet.

Childs Restaurants were not known for their seahorse designs. There are absolutely no seahorses on the Coney Island building that inspired these knock-offs. I’d like to see some historical sourcing for these identifications. The identified building on 6th Avenue in Manhattan has no historical sources and most likely was never a Childs. I have sourced dozens of stores in Manhattan, Brooklyn (only downtown and Coney Island, no where else), Syracuse, Buffalo, DC, Philly, Boston, Miami, Pittsburg, Cleveland and on and on and on and none of them have seahorses. Why would they? Childs started out as a Dairy Lunchroom and became the largest restaurant company catering in the country, to the middle class worker not a seafood joint like Lundy’s. I’d like to see some proof for any of these buildings.

The company had always made sure it constructed distinctive, quality buildings for its restaurants, places that would seem special to the common folk who were
expected to dine there. But the white-tiled look was getting to be old-fashioned; it looked too much like what it was, a lunchroom. The New York Times reports that
when William Childs was planning a new restaurant on elegant Fifth Avenue, he faced opposition from property owners who didn’t want such a lowly enterprise
in their neighborhood. Determined to build a distinctive new structure, Childs hired the brilliant modernist architect William Van Alen (1882-1954), who created a
tasteful but restrained five-story limestone building with bronze trim inside and no white tiles. It was an immediate hit. Bolstered by this success, Van Alen would
go on several years later, in 1929, to design New York City’s Chrysler Building, perhaps the ultimate art deco celebration of modernism in American architecture.