I mentioned at the outset of my January 2020 walk from Little Neck to Forest Hills that there is something of a barrier between Little Neck, Douglaston and the rest of Queens: Alley Pond Park and the north-south Cross Island Parkway. I suppose I’m making excuses, but it’s that very barrier, on which pedestrians are only permitted on Northern Boulevard and West Alley Road north of Union Turnpike (see Open Street Map for reference) that prevents me in The Time of Coronavirus from exploring Queens as usual. I do not want to chance the subways and long bus rides, and keep my Long Island Rail Road rides to a minimum. Walking through even eastern Queens locales such as Bayside and Whitestone would take up a lot of time just to get there, because of the two out-of-the-way routes available to me. Drive to where I want to walk? I don’t have a license. It’s possible I could once again invest in a bike lock. Where there is a will, there is a way. For now, I think I’ll wait till the virus loosens its grip to do any more lengthy walks all over town.

I have a backlog of unused photos from previous walks in the hundreds, and barring technical trouble, there’s nothing that stops new Forgotten NY material from emanating from the keyboard. (I bought a lemon of an IMac from Best Buy in November, and will probably try to get Apple to refund me for it or send another machine; therefore, I’m using my old one, an impossibly old machine…from December 2013.)

Not only that, I have found that there’s a great deal of Little Neck, Douglaston, and even east in Great Neck and Lake Success that I have not thoroughly explored, all within walking distance from the compound. And that is probably true for everyone in whatever neighborhood they’re located in. As I’m fond of saying, there are worlds within worlds. If you can’t take the train anymore, you can still drill down into your own neighborhood and find things you didn’t know about.

Sharp eyed observers will not a difference in the lighting in today’s pictures; I am combining images from two walks, one on a cloudy day, one on a sunny day.

I followed the Street With Three Names north of the Long Island Rail Road from Little Neck Parkway. The Department of Transportation doesn’t deign to identify its western end, but signs on houses say it’s 39th Avenue. The middle stretch through Udalls Cove is called Sandhill Road. And, at the junction with Douglas Road in Douglaston, a sign has it as Bayshore Boulevard, a name I have never heard uttered by anyone. Locals call it just “the back road.” It is the only way to get from Little Neck to Douglaston north of Northern Boulevard. The helpful Open Street Map has the correct configuration.

The central section of 39th Avenue/Sandhill Road. The house on the right is the only one with a Sandhill Road address and is perched at the edge of the Udalls Cove marshes. 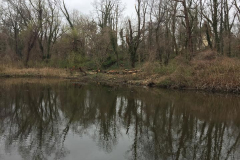 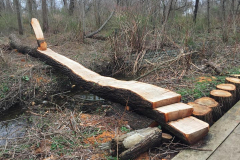 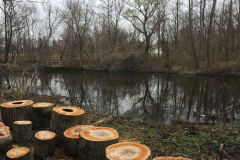 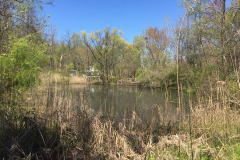 Udalls Cove, accessible from Sandhill Road just past the bend in the road, is a 30-acre park dedicated solely to wildlife and nature preservation. Udalls contains salt marshes, a forest, meadow and a freshwater pond. Though the area retains a rural flavor, the Hand of Man is evident.

The cove is named for 19th Century settler Richard Udall, who owned a mill in the region; his family owned the property until 1950 when the Nassau County portion of the property was sold to the Nassau County Historical Society. The Udall’s Cove Preservation Committee, which takes charge of the park’s upkeep, was formed in 1969 and the cove was opened to the public in 1972.

At the northern edge of the ravine is Aurora Pond. This pond is named for Aurora Gareiss, co-founder of the Udalls Cove Preservation committee in 1969, who along with Virginia Dent fought for over 20 years to insure that this rare natural wetland would receive publicly sanctioned environmental protection. Virginia dent is remembered by Virginia Point at the northern end of Little Neck Parkway.

I pressed through Udalls Cove west into Douglaston and went west along Cherry Street, until recently known as 39th Avenue (and is still called 39th Avenue on the Landmarks Preservation Commission atlas). Much is known about the houses in Douglaston (north of the tracks) and Douglaston Hill (smaller area south of the tracks) as each is described in detail in LPC reports. I’ve always been attracted, for example, to this large building, 38-73 Douglaston Pkwy., set on the NE corner of Cherry. It has Frank Lloyd Wright-ish touches I admire. The Douglaston LPC Report cannot identify its first owner but reports it was built in 1910. “Notable building features: complex roofline of hips and gables with exposed brackets; exposed brick chimney; shed dormers; wrap-around porch, recessed beneath roof slopes with curved brackets;windows with historic diamond-pane sash.”

Major Thomas Wickes, a patriot originally from Huntington, owned the entire Douglaston peninsula jutting into Little Neck Bay after the Revolutionary War, and subsequently sold it to Wynant Van Zandt in the 1810s. Scotsman George Douglas purchased the peninsula from Van Zandt in 1835. The region was later developed as a suburban resort and exclusive enclave, and enjoys pleasant views of Little Neck Bay and Long Island Sound. Streets were laid out in 1906 by the Rickert-Finlay realty company, who had purchased the property from William Douglas, George’s son, and eclectic, individualistic homes were built in the area, which has always been among Queens’ most affluent. The streets have retained their original names and have ignored the Queens mania for giving every street a number. The Douglas name was appended to the area in 1876, after William Douglas had donated a Long Island Rail Road stop. 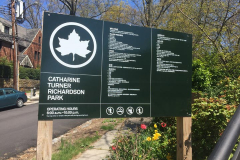 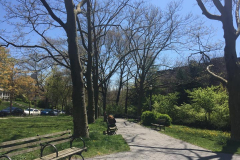 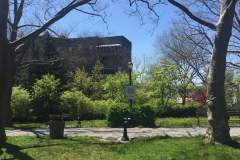 South of the tracks, you enter a second Landmarked district, Douglaston Hill. There is a confluence of roads at Douglaston Parkway, Poplar Street and Prospect Avenue forming a triangle called Catherine Turner Richardson Park. Richardson (1903-1988) was an active member of the Douglaston Garden Club and a catalyst for the group’s participation in beautifying Douglaston Park. The Garden Club has been “working to beautify Douglaston & Little Neck and foster a sense of community with its members” for nearly a century.

Two of the landmarked residences on Prospect Avenue (till recently 240th Street) facing the park, 42-09 and 42-17. According to the Douglaston Hill LPC report they are neo-Colonial and Tudor revival homes constructed in the early to mid-1920s.

They were built “during the enormous growth period of the 1920s, when the population of the Douglaston/Little Neck area increased from 2,000 to 8,000 and several new houses were constructed in the Douglaston Hill Historic District on new building sites created by the continuing subdivision of the original Marathon lots.” In the wake of George Douglas’ death when building lots were first laid out in Douglaston Hill, it was called Marathon after the Greek town where the Athenians defeated the Persians in 490 BC.

A small plate above the front door at 240-02 Poplar Street, on a large lot on the corner of Prospect, reads “1835.” I realized it couldn’t be the original address: it’s the year the owners believe the house was constructed. The LPC describes it as having a “[c]omplex footprint and profile consisting of five attached sections and wings of varying sizes and heights.” It is indeed an old building, constructed in 1850 (not quite 1835) and moved to this location and greatly expanded by developers Samuel Lindbloom and Edward Schultz in 1927.

Department of Transportation signs identify Prospect Avenue as a “dead end” north of Poplar Street. But it isn’t, not quite. It curves east at the LIRR tracks and changes its name to Depew Avenue, where you will find a few homes, a couple of which fall into the Douglaston Hill landmarked district. The area has a couple of hitching posts, some rusty and some painted like this one. I do not know if they’re originals but it must be said that it’s in front of 240-27 Depew Avenue, constructed in the mid-1800s according to the report; Depew Avenue was originally called Willow Street, a name that persists on the other side of the tracks.

Automobiles will indeed find a dead end at the east end of Depew Avenue (though there is another piece in Little Neck) marked by a pair of red caution lights. However, pedestrians can continue south on a staircase recently built by a Boy Scout troop to a sliver of Udalls Cove Park.

According to FNY correspondent and King of NYC’s Hidden Waters, Sergey Kadinsky, the rivulet running through Udalls Cove is known as Gabler’s Creek.

The walkway through Udalls Cove Park here runs past LIRR tracks; in fact, there is an unprotected clearing that leads straight to the tracks, a potentially dangerous situation.

Little Neck is one of the few neighborhoods that uses conifers as curbside trees. In fact the local civic organization is called Little Neck Pines.

I am home again, unmasked.

What your future will look like (pay attention to the final paragraph & what it would mean for Queens, especially Little Neck & Douglaston):

Probably the safest thing you can do is wander in the outer fringes of the boroughs.

Hello Kevin,
I came across your site by accident as I was doing research for a historical novel that takes place in the Bx., in the 1950’s. My old phone no. was TY for Tyrone. I still remember my excitement when we got our first phone. I grew up in Pelham Parkway and went on to live in every borough except Staten Island. I too, was always entranced with the out of the way places and little known history of NYC.
I enjoyed your ramble in Douglaston as I once taught at Little Neck JHS, JHS 167, but that was many years ago! I am publishing my book about Pelham Parkway soon and if you are interested, I would like to send you a copy? BTW-my 4th gr. teacher was Elsie Walsh.

Recently I heard that Little Neck clams were named after Little Neck Bay. Does anyone know if that is true?