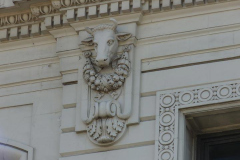 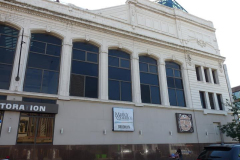 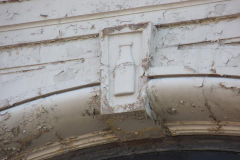 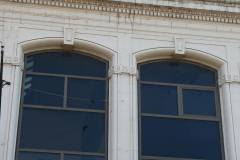 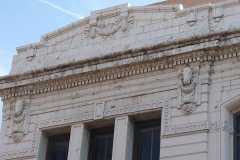 Remarkably, the former Sheffield Farms bottling plant in the heart of Bedford-Stuyvesant on Fulton Street at Marcy Avenue has not been protected by the Landmarks Preservation Society and thus I do not know much about its architect or when it was constructed. However, since it closely resembles another Sheffield plant on West 125th Street between Broadway and 12th Avenue, I can infer that it may have been designed by Frank A. Rooke, a specialist in stable and industrial architecture, and performed similar functions to it. Like the one in Manhattan it boasts a gleaming white tiled exterior. However, the Brooklyn plant also has stylized cows’ heads and milk bottles in terra cotta on the exterior!

In the early to mid-20th Century Brooklyn milk production was dominated by Borden, Renken’s and Sheffield Farms, whcih was established by L. B. Halsey in the 1880s. He named the company for his wife, Sarah Frances Sheffield, whose family in New Jersey bred superior milk cows. Sheffield Farms was the first milk distributor in the USA to use a pasteurization machine, in 1892. The company was eventually acquired by National Dairy Products which was in turn acquired by Kraft in 1976.

Sheffield bottling plants around town have become the CBS Broadcast Center, on West 57th between 10th and 11th Avenues, and the 125th Street plant is now part of Columbia University.

In Brooklyn, its Sheffield plant transformation is no less prestigious since in 1972, it became the home of the Bedford Stuyvesant Restoration Corporation which restored the building top to bottom and brought in prestigious tenants such as the Billie Holiday Theatre, Skylight Gallery, College of New Rochelle and others.

In June of 2020 Fulton Street in front of Restoration Plaza was painted by local artists with the words “Black Lives Matter” in response to the events in May and June of the year.