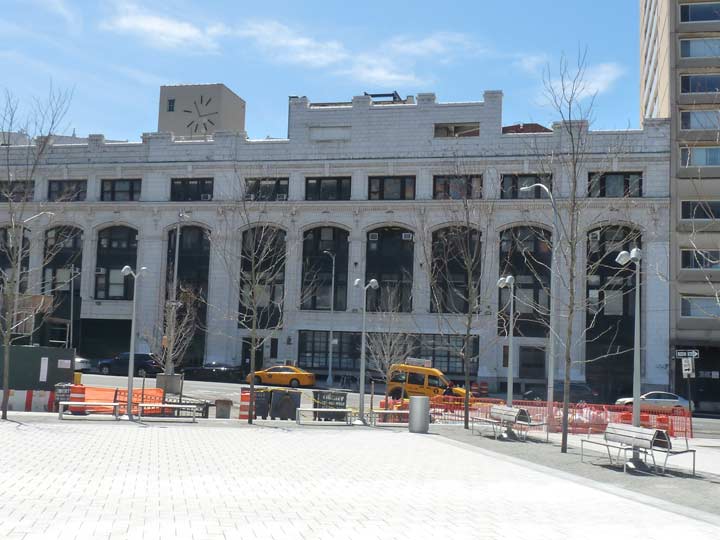 Some parts of New York City closely resemble the way they did in the 1920s or 1930s; 7th Avenue in the Garment Center, from Macy’s north to about West 40th, comes to mind. Others are changing rapidly by the month. Hunters Point, with its rapidly multiplying Monolith Monsters-style glass towers, is one such are and another is Manhattanville west of Broadway and north of West 125th, where Columbia University is constructing a number of new office and scholastic buildings, sweeping away the old slaughterhouse buildings, factories and lofts.

One constant that will remain is the former Sheffield Farms milk bottling plant. It was designed by Frank A. Rooke — a specialist in stable and industrial architecture — with a pure, gleaming front of white glazed tile, and trimmed with copper windows and other details, oxidized to green.

The Sheffield dairy had a copper and glass overhang over the central section, shielding delivery wagons from the elements. The milk cans were emptied on the top floor in a dust-free room: the windows were double-glazed, and air pressure was kept higher than that outside, so air was constantly flowing out.

Milk flowed down through filters and pasteurizing equipment until bottled and sealed at the ground-floor level. Ice was dumped into the screen-bottom milk crates, which were transferred to delivery wagons moving through a half-oval path on the interior, entering on the right side of the building and exiting on the left. Sheffield Farms president Loton Horton opposed pasteurization, but this plant included the process.

The processing facility was purchased by Columbia University in 1949 and renamed Prentis Hall. It is the survivor of a number of milk processing plants once located in Manhattanville. Columbia is continuing its operations there.

This building at one time had a railroad siding in back as milk was shipped into NYC from farms in upstate NY and Vermont(pre WW2)via the old NY Central and Rutland RR as well as the NYOW RR,havnt seen the back of the building since the late 60’s so don’t know if there is any left over signs of rails or rail doors(as some milk was shipped in cans and in tank cars)…..better highways and cheaper truck rates killed off a great deal of the rail traffic as well as Vermont being kicked out of the NY Milk “”shed””…..

Interesting LINK: Vermont being kicked out of the NY Milk “”shed””…..

In the 1960s and early 1970s, 525 W 125 St (shown) was home to Electronic Research Laboratory of Columbia University’s School of Engineering. It was divested and renamed Riverside Research Institute after campus protests in 1968-9. RRI also occupied 611 W 129 St, which lies directly across the street. That building had a tunnel connecting to the Hudson River, where raw milk was at an earlier time unloaded from barges. I worked there from 1968 to 1975, after which I was transferred to an RRI office near the Pentagon. I have lived in Northern Virginia ever since.

I think there are some milk bottling plant structures still in the Bronx.