During the week I was scuttling around Floral Park, just south of Little Neck, testing out a healing sore calf and looking for some shade, since it was 95 degrees. And, since it had hit 95 degrees, I thought of 95th Avenue, the only numbered street in the metropolitan area that runs in three counties: Kings, Queens, and Nassau.

Before going any further, let’s look at a few maps. Open Street Map is very helpful for stuff like this since county lines remain visible no matter how close you zoom in, unlike Google Maps. Here’s a closeup of the Kings/Queens county line, as it zigs from Eldert Lane to Drew Street. North of the horizontal boundary it’s Brooklyn; south of that, it’s Queens. Thus, with the line running along 95th Avenue, the north end of 95th Avenue is technically in Brooklyn.

95th Avenue at Forbell Street, looking west to Eldert Lane. The right side of the photo is Queens; the left side is in Brooklyn. I have to say the the residences on the Brooklyn side of the two blocks of 95th Avenue have “Queens-style” hyphenated addresses, 73-12 and 73-14, despite what Open Street Map indicates. I’d be curious to know whether the Post Office considers both sides of 95th Avenue to be in Queens here.

From here, 95th Avenue continues on a straight line through Woodhaven, interrupted a couple of times, ending at 150th Street. After that, though, the Long Island Rail Road occupies the space 95th Avenue would, so it doesn’t pick up again until you are near the Queens-Nassau line:

95th Avenue begins again at 222nd just south of Jamaica Avenue and then runs east, a few blocks into Bellerose Terrace in Nassau County, ending up at 239th Street. The numbering sequence is a bit wonky here as well, jumping from 226th straight to 238th, which happens in both Queens and Nassau. Why? Well, you’d have to ask whoever determined this in the Queens Topographical Office in the 1920s, and they’re all dead by now. 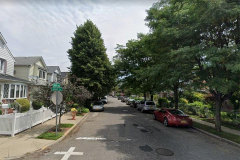 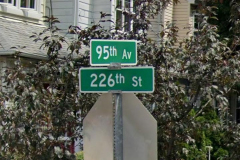 In Bellerose Terrace, things look very similar to Queens Village, from which we’ve just come, with the exception of the stacked street signs; this method hasn’t been used in NYC in decades.

Bellerose Terrace continues Queens’ street numbering scheme in Nassau, with the whole shmegeggie including hyphenated house addresses. There are other parts of Nassau that do this, as well, including parts of Elmont (just south of here) and some “unincorporated” bits of Nassau just east of Little Neck formerly had Queens numbering.

How did the south side of 95th Avenue wind up in Brooklyn for two blocks? It has to do with the redrawing of the Kings-Queens county line, which occurred in the mid-1920s. North of the Brooklyn-Queens cemetery belt the borough line was straight, cutting through blocks and in some cases, homes. It was redrawn to zig and zag along several streets and avenues.

Here’s an except from a Kings/Queens map in 1852. Back then the area was mainly farms with a few small towns scattered about. At the top is the Jamaica Plank Road, today’s Jamaica Avenue. The dotted line is the Long Island Rail Road. Rockaway Boulevard and the Union Race Course can be seen at right, and at the bottom is Old South Road which survives in bits and pieces today.

The big red gash is the Kings-Queens County Line, which in 1852 was defined by Spring Creek, and inlet of Jamaica Bay. The city once had high hopes for Jamaica Bay and the Spring Creek area, hoping to build a deepwater port and a railroad station, but the plans were abandoned and the area was landfilled and the Belt Parkway built at the southern end.

As late as 1922, the Spring Creek border was unaltered according to this Hagstrom.

Spring Creek’s northern end was diverted into the sewer system, and the county line was changed here as well, so that it ran along Eldert Lane, Glen Street and Drew Street (among others) as it does today. Along the way, Glen Street was changed to 95th Avenue, though its section west of here that was completely in Brooklyn remained Glen Street.

95th Avenue isn’t the only Queens numbered street that strays into Brooklyn: the westernmost half block of 101st Avenue, as it angles northeast from Liberty Avenue at Drew Street, is completely in Brooklyn!

“North of the horizontal boundary it’s…” Brooklyn actualy. You had my head spinning!

No NORTH of it you’re in Queens

I told you my head was spinning. Kevin, you have in the original text, “North of the horizontal boundary it’s Brooklyn” and in my comment I meant to say no it’s Queens.
So we both wrote it wrong and now we have both written it right. I’m outta here.

How ironic is this? Both Brooklyn and Queens have a 101st Ave and 101st St. I believe 101st St and 101st Ave (just a block long as per the above article) in Brooklyn are the highest numbered streets. 101st St is less than 1/4 mile in length extending from 3rd Ave, crossing 4th Ave to Fort Hamilton Parkway in South Brooklyn.

I GREW UP ON THE SOUTH WEST CORNER OF DREW ST AND 95TH AVE. OUR ADDRESS WAS 74-20 95TH AVE. MY PARENTS LIVED IN THE HOUSE FOR 20 OR SO YEARS PRIOR AND THE ADDRESS THEN WAS 324 GLEN ST. IN THE 1950’S WE STILL RECEIVED MAIL TO 314 GLEN ST. THE MAILMEN WERE STILL AWARE OF THE TWO ADDRESSES