Bowne House, on Bowne Street north of 38th Avenue in Flushing, Queens, was built in 1661 by English settler John Bowne and, unlike many other colonial houses from the 17th and 18th centuries, it still looks a great deal like it did when it was built (though a coat of paint wouldn’t hurt).

Peter Stuyvesant, continuing his reign of terror against religious dissenters, had Bowne, a Quaker, arrested in 1662. Before the construction of the Friends Meetinghouse (see above), Bowne’s house was the primary site for Quaker services. Sentenced to pay a hefty fine, Bowne refused and was jailed; he was subsequently exiled to Holland. While he was there, Stuyvesant’s bosses at the Dutch West India Company reversed Stuyvesant’s non-tolerant policy, claiming that the colony needed many immigrants to ensure economic expansion, no matter what faith they were. Bowne returned home to Flushing in 1664; the British sailed into New Netherland five months later, and Stuyvesant surrendered without a shot being fired.

Two hundred years before, a dry goods store called Bowne & Company had opened, and it later focused on printing, especially financial documents like prospectuses and merger proxies. One of its customers was Lehman Brothers, the investment bank that collapsed in 2008. Today, Bowne Printers still works in handset type, as was done 200 years ago. The Bowne family has far flung holdings in the NHYC area; the John Bowne House (see above), built in 1661, still stands in Flushing, Queens. Other Bownes settled in City Island, an island in Eastchester Bay part of New York City since 1895, and there, Bowne Street recollects their presence.

Print shops of this type originated common phrases like “uppercase” and “lowercase” as the letters were once kept in 2 separate cases. “Mind your p’s and q’s” came about because the two lowercase letters are mirror images of the other.

Meanwhile there’s a Bowne Street in Brooklyn, in Red Hook. According to Benardo & Weiss’ Brooklyn By Name, that Bowne Street is named for brothers Rodman and Samuel, who ran a ferry from Red Hook to Catherine Street in Manhattan beginning in 1811. 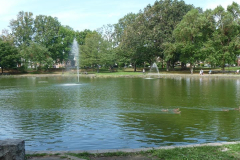 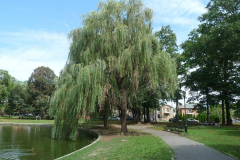 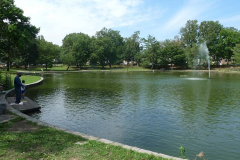 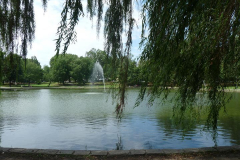 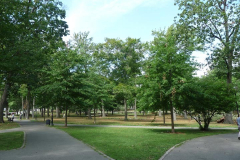 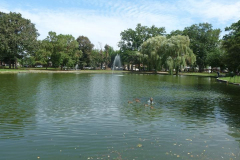 Bowne Park is a somewhat large park in Murray Hill, Queens, northeast of Flushing. Shaded paths wind around a central lake and there’s a playground on the eastern end of the park, which is between 29th and 32nd Avenues and 155th and 159th Streets. The Bowne this park is named for is Walter (1770-1846), who served as NYC mayor from 1828-1832. Walter Bowne’s summer residence stood on the site until it burned down in 1925 and the City acquired the property for parkland.

Bowne was in office during a cholera epidemic and in 1832 established a strict quarantine restricting travel in and out of the city which at that point consisted of just Manhattan island, in a situation that reminds us of the current situation with Covid-19. Bowne, and others at the time, were unaware that cholera is not contagious and only much later, in 1883, was it discovered that cholera is spread through contaminated water or food. Despite his efforts cholera killed hundreds of New Yorkers.

WHERE IS WILLETS POINT?

I interviewed once at Bowne on Hudson Street. Took hundreds of years to learn to avoid Cholera don’t sh*t where you eat

Another (unrelated) Bowne family came from Salem, MA in the 1600s and settled in Gravesend for a while. (I’m not sure if the Red Hook Bownes are of this lineage) From there they relocated to New Jersey and became powerful both in business and politics. Andrew Bowne was acting governor at the turn of the Eighteenth Century. Descendants include President Abraham Lincoln and NJ Governor Thomas Kean.