I noticed that this FNY post from January 2011 hadn’t been brought over when the site was redesigned in early 2019, so I’ll repost it here…

In contrast to the stretch of blocks north of it — where most buildings are between 5 and 10 years old — 6th Avenue between West 23rd and 24th presents three buildings that go all the way back to the mid to late 1880s. As we’ll see, they amazingly look the same as they did then, too, except for changes made on the ground floors.

A classic blue and white liquor store sign can be found on the 24th Street side — as far back as my memory goes, there hasn’t been a liquor store here — but the real finds are entablatures on the sides of the building and the pediment on the roof, which advertise “The Corner” and list the names Koster & Bial. 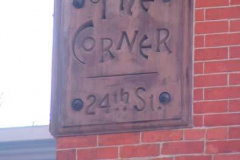 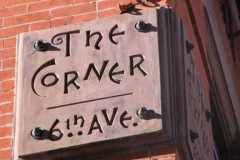 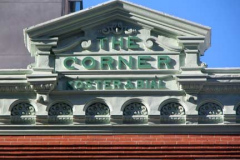 As Walter Grutchfield explains at the excellent 14 to 42, John Koster and Albert Bial were German immigrants who ran a series of entertainment establishments and concert halls in the late 19th Century. They opened their first venue a block south of here, at 6th Avenue and 23rd Street, in 1879, a beer garden with occasional performances. Two years later Koster & Bial opened a second establishment at 115-117 West 23rd; this one was more of a theatre offering song and comedy, a precursor of sorts to vaudeville. K & B remained in the 23rd Street area until 1892, when they moved uptown, as much of NYC’s entertainment business then was doing, to West 34th, where they ran a larger theater under the aegis of Oscar Hammerstein, Senior until their deaths in 1895 and 1897 respectively. The uptown Koster & Bial’s property was purchased by R.H. Macy’s in 1901, and The World’s Biggest Store remains on the property today.

Thomas Edison presented what he called the first demonstration of a moving picture at K&B in 1896, though that accomplishment is claimed by others.

“The Corner” building at 6th Avenue and 24th was constructed from 1886-1887 and served as K&B’s offices, also containing a beer bottling business. Ironically it was part of the K&B empire for only a short time. The print above, from the NYPL archives, shows it in 1892, and it looks remarkably the same today.

Any discussion of “The Corner” building is incomplete without mentioning Billy’s Topless, which held down the storefront for nearly 3 decades before a change in zoning ultimately doomed it in 1999. I never got an opportunity to go in, but Vanishing Jeremiah did:

For over two decades, Billy’s was a neighborhood bar.They served a free sterno-heated buffet (that no one ever touched). The customers and the dancers knew each other, chatted together, and no one got hustled…Girls from the Coney Island Sideshow danced at Billy’s, tattoos and all. The stars of the new burlesque paid the rent and tried out new routines at Billy’s. Each girl was unique, some beautiful, some boring, while others looked like something straight out of Diane Arbus.

Even some girls from the Fashion Institute of Technology would dance at Billy’s on their lunch hour to help pay school bills, so I have been told. 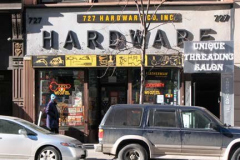 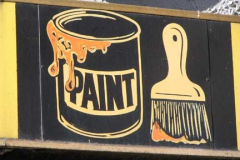 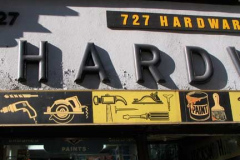 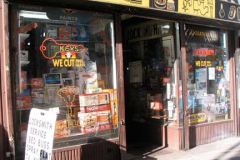 If you look at that NYPL print above, you can see that the building immediately to the south of “The Corner” is also remarkably unchanged over the decades, second floor arch and all. That ground floor hardware store must have had its plastic lettered sign for quite a number of decades, as well. Look at that window jammed full of home goods. It says, “Forget that Home Depot down the street; you can get all you need here.” Maybe I should have gone in there for my lightbulbs.

This building contains a number of floral ornaments on the first and second floors. Why did 19th Century architects and designers include filigree like this? Just because.

A not so fond look north on 6th Avenue, so you can see what it has become.

Billy’s must have lasted later than 1999. I started work in that area in 2000 and I remember going in there.