Surprisingly, there’s a lot for me to write about on 37th Street between 4th and 5th Avenue, a street on the borders of both Sunset Park and Greenwood Heights, that little sliver of a neighborhood between Green-Wood Cemetery and the waterfront between about 20th and 39th Streets. There’s a years-long remembrance I have about the block that is little remembered by many but apparently consumed the block for about a 4-year period about 30 years ago (as of 2020). I’ll get to that in a bit, but first I’ll talk about my own memories.

Why feature a McDonald’s in Forgotten New York? There’s one in every neighborhood and they’re pretty commonplace now. That wasn’t the case, though, when I went to high school in the Super 70s, and this one, at 4th Avenue and 37th Street, was the only McDonalds in western Brooklyn that I knew about. Occasionally, on the way home from school, I’d spend an extra fare by getting off the train at 36th Street, eating here, and then getting the B70 bus home; the stop was right there on 37th Street! 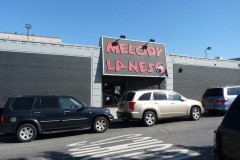 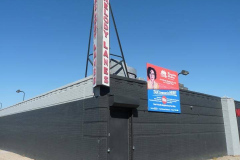 Let’s go to the other end of 37th Street at 5th Avenue for a look at Melody Lanes. I was once an enthusiastic bowler, and belonged to several leagues including my grade school St. Anselm, high school Cathedral Prep and college, St. Francis; the latter competed at Bowlmor, then on University Place at East 12th in Manhattan. I must have bowled at a dozen lanes around town…but never Melody. My home lanes were at Leemark on 88th and occasionally Bay Ridge Lanes, 8th Avenue at 64th. But I never bowled here! Of course, if I still bowled and lived in western Brooklyn, this is the only lanes in town. Melody, opened in the early 1960s, recently became the home lanes for the women’s bowling team at my alma mater SFC. 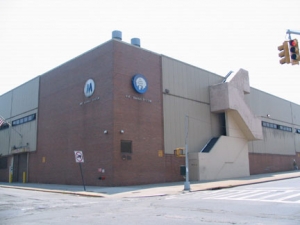 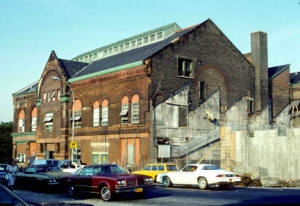 So, which building do you like better? The present-day Jackie Gleason Bus Depot, built in 1988, or the structure it replaced, the 1890 Union Depot, which served the Brooklyn, Bath and West End Railroad (today’s D and M trains) and the Culver (today’s F train)? I thought so.

The Union Depot became a subway/el car and bus inspection shop in about 1917 and served that role until 1984, when it was demolished. The much sparer Jackie Gleason Depot was built in 1988, named for the Brooklyn comic whose perhaps most beloved character was Brooklyn Bus driver Ralph Kramden.

The Gleason depot shield imitates the opening rising moon sequence of Gleason’s best-remembered TV show, The Honeymooners. In the show, Ralph Kramden was a bus driver in Manhattan.

I was really visiting 37th Street for what I could see on both sides of the block…and also what is in the sidewalk on the north side of the street. 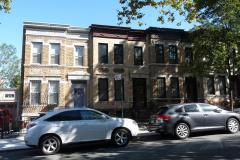 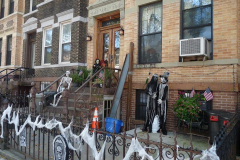 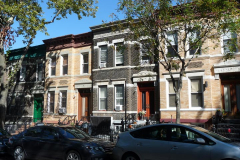 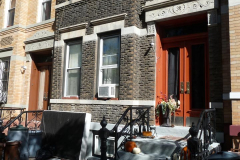 For most of the block 37th Street is lined with gorgeous (to my eyes) attached brick dwelling with stoops in the front. Some of the buildings still have their original doors and railings. These buildings were likely built in the 1910s, early 1920s at the latest. 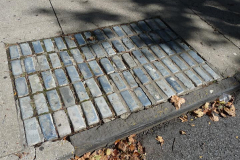 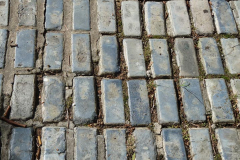 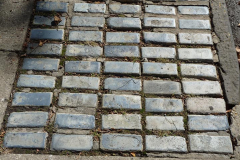 They resemble NYC’s street paving stones — known as Belgian blocks…but while Belgian blocks are gray, these are light blue. Elsewhere in NYC, there are red brick pavements, on 89th Avenue in Jamaica, and yellow bricks, on Stockholm Street in Ridgewood. But these stones were once used to pave 37th Street. How do I know?

That’s where Elaine Harmon of Fort Davis, Texas comes in. A couple of weeks ago I received a big box in the mail. Unsolicited, Mrs. Harmon, a former Sunset Park resident sent me a treasure trove of items including Sunset Park brochures, historic documents from the Brooklyn Navy Yard, and about twenty more ancient neighborhood guides going back to the 1970s and earlier. She had photocopied them for her own collection, and mailed me the originals.

Among the items Mrs. Harmon sent me was a clipping from The Brooklyn Paper from August 1988, written by Bob Howe, describing the neighborhood controversy regarding these blue paving stones.

The president of the 37th Street Block Association, ophthalmologist R. Douglas Hahn, 44 in 1988, was aware that the bricks were located beneath an asphalt topping and was resolved to uncover them. Using an army of volunteers that included local high school students, he began removing the asphalt and uncovering the stones.

According to Dr. Hahn, the stones were brought to NYC by a Spanish clipper and were left over from a trip to Puerto Rico, where they were also used to pave the Plaza of San Juan Calle de Cristo. The blue bricks are centuries old and were produced in the 1500s, during Spain’s years of conquest in the New World.

After getting started on his unauthorized project, Dr. Hahn was opposed by the Block Association, which didn’t want the street to be disrupted and feared that the stones would be too slippery to safely support traffic. However, he also said in the article that he had acquired 35 signatures in support of the project. That’s where the article leaves things in the summer of 1988.

Cut to around 1990, when, as I was riding in the B63 bus down 5th Avenue, I noticed the blue stones on 37th Street. From that, I can infer that Dr. Hahn was at least partially successful in getting the Spanish stones uncovered. However, I also recall reading later, though I have no documentation to prove it, that the Dinkins administration had the stones removed and sent back to Spain. The stones are gone from the roadbed, with just the small sample in front of #441 to show that they were there.

I have PM’d Dr. Diedrich Holtkamp, who is mentioned in the article, to verify the disposition of the stones. Dr. Hahn has an ophthalmology practice in Milford, NJ., though I’m reluctant to call his office with an inquiry like this. If anyone has an email, PM Kevin J. Walsh on Facebook. Please do not put it publicly in Comments.

Meanwhile, Bob Howe sent me a clipping of his article in its entirety:

I hope to verify what happened to the stones sometime soon.

Another great posting. I’m not a Brooklynite but I am always amazed at the variety of housing and street systems in the borough. For example, Brooklyn has 37th St., East 37th St., and West 37th St., all separate and distinct streets that do not meet.

One minor historical (and fictional) correction please – Ralph Kramden drove the Madison Ave. bus in Manhattan for the Gotham Bus Company (in reality the NYC Omnibus Corporation when the show was filmed in 1955-56). Today would be route M1, part of NYC Transit’s Manhattan bus division. Its buses are garaged at 146th and Lenox Ave. in the Mother Hale Depot. And if Ralph were still driving, the route would be southbound on 5th Ave. and northbound on Madison.

My favorite TV show of all time. Sometimes Ralph’s job was actually woven into the story plot. Case in point – “A Man’s Pride” – when Ralph poses as a big boss at the bus company in order to make an old acquaintance think that Ralph is more than a bus driver. Takes place in Mr. Monahan’s office.

I remember seeing some of those stones on Staten Island when I was young. They were not pavement. As far as I can think back, they were dumped in a lot. I grew up on the north shore.

The B4 bus was switched from Ulmer Park years ago to Jackie Gleason, so it got an earlier start on the Bay Ridge end. The B23 was discontinued years ago due to budget cuts.

Thanks for covering a little known subject. Some of the “gorgeous attached brick dwellings” which line this street date to the last decade of the 1800s which was my family home for fifty years. It was actually
built around 1898, I think. This was a very quaint neighborhood in which to grow up in the 1950s, consisting of mainly hard working European families.
Somewhere a long time ago I had read that the blue stone was quarried in the Palisades of New Jersey, but cannot find the source. Your articles and photos are excellent; compelling information. We are loyal readers in Texas.