The buses were free in the summer of 2020, in this Year of Covid. I took somewhat advantage, traveling on the Q36 on Little Neck Parkway and Jamaica Avenue to locales I’ve only been a few times such as Queens Village and Floral Park. The party was over in August, when the MTA revived the $2.75 bus fare; and unless the agency gets plenty of relief aid from the Feds, 2021 will be a sorry year as subway and bus lines will be severely cut or eliminated. However, let’s live in the here and now…

The land where Queens Village sits today is actually on the western end of the vast, flat Hempstead Plains that dominate southern Nassau County. The area around Jamaica Avenue and Springfield Boulevard was settled early on, in the 1820s, by entrepreneur Thomas Brush; an early name for the settlement was Brushville but by the late 1800s, it was called simply Queens. The “Village” was added later to differentiate it from the county and borough.

The intersection is punctuated by the wedding-cake white Queens Reformed Church (Eglise de Bethesda) which dominates the NE corner of Jamaica Avenue and Springfield Boulevard. The “old white church” opened in 1859 as the Reformed Protestant Dutch Church. The columned portico was added in 1947. The coat of arms, which can be seen in the sanctuary, features two foreign-language phrases: Nisi Dominus Frusta (Latin, ‘Without the Lord all is in vain”) and Eendracht, Maakt, Macht (Dutch, “Union Makes Strength”).

Here’s a look at the church in 1960, from the Greater Astoria Historical Society collection. The church looks practically the same!

However, you can also see state-of-the-art street lighting, with an octagonal post with a Westinghouse “cuplight” incandescent. The fire-alarm indicator globe is mounted atop the Westy, as was the practice then. In addition, stoplights were then painted black. By 1965, though, all had been repainted in bright yellow, now standard in NYC.

At the southeast corner of Springfield and Jamaica is shown the long-shuttered Queens Theater. The theatre, designed by architect Thomas Rau, opened December 29, 1927 and while it was originally a vaudeville theater featuring stage shows, it converted to films early on. Almost to the end of its run, though, the Queens was unable to show first-run pictures, which were available in Jamaica, anyway, and switched to porn before it closed. In 1938, two of the projectionists, Nathan Klein and Solomon Schulman, got into a fight; Klein was killed, and Schulman was convicted of manslaughter and received a 15-year sentence. The theatre eventually became the New York Deliverance Gospel Church, but it’s now shuttered and awaiting the next chapter. 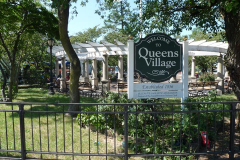 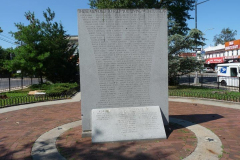 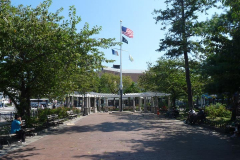 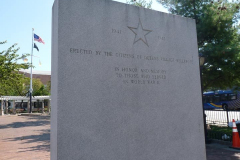 The Long Island Rail Road has had a station at Jamaica Avenue and Springfield Boulevard since 1834, the first year the railroad penetrated this far east. The square formed by the two roads and Amboy Lane is the Queens Village and Bellerose World War II Veterans Memorial Plaza. The plaza contains a memorial to area Queens Villagers killed in WWII, Korea and Vietnam. 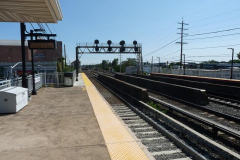 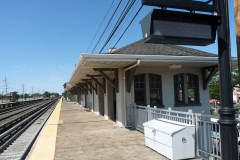 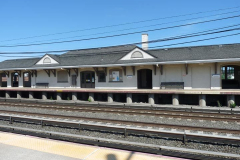 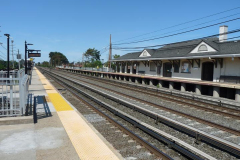 The area now known as Queens Village, centered at Springfield Blvd. and Jamaica Avenue, was known originally as Little Plains, then Brushville, for Thomas Brush, until about 1920. The present elevated station was constructed in 1924.

In 1856, residents voted to change the name of the town to simply “Queens” and that name persisted until at least the 1920s, when the Long Island Rail Road added the word “Village” to the station name. Before the 1898 consolidation the village of Queens was located in the county of Queens, which may have led to some confusion. However, people have seemingly adjusted to saying “New York, New York” for over two centuries.

Interestingly the Queens Village station has the remnants of a layup track to the rear of the eastbound platform.

If you look closely at the control tower (which recently closed, ceding control to the Jamaica station) you can see the station’s old name, simply “Queens.”

Here’s a relatively unadorned private house at the corner of Springfield Blvd. and 100th Avenue…

…and how 100-02 Springfield looked around 1960, from the GAHS archives linked above. 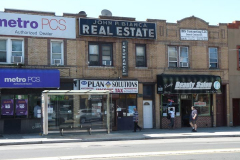 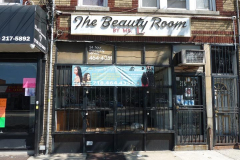 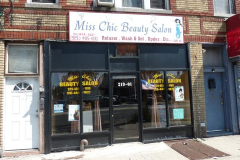 A sampler of storefront signs along Hempstead Avenue between Springfield and the city line at Cross Island Parkway. I doubt John P. Bianca is still there.

Signs for a nonexistent pay phone at Hempstead and 219th Street.

My briar patch. From Jamaica Avenue, the town goes north as well as south. I grew up on 222nd Street, two doors away from Union Turnpike and the Bayside lines.

I lived on 225th Street from 1966?-1981. Knew everybody on my block:The Winkelers,Simmons,McDonalds,Kunkels,Powers,Capezas,Winkler,and The Grillo.
Remembered walking to Cromer Butchers;Packers Supermarket or seeing a movie at two of the movie theaters. Playing football in the street. It was a great time.And wonderful memories.

Hey, I’m a grad student at Columbia and a current resident of Queens Village and I loved this! This was a succinct history of “small town Queens.” I’m actually currently writing a paper on Queens Village, and would be interested in interviewing you/comparing notes if possible, thank you.

Send some questions to me ay kevinjudewalsh@gmail.com

Wow, thanks for this update. Lived 2 blocks from Jamaica and Springfield.

Nice posting. Enjoyed the old houses you showed.
A couple of points about Queens Village LIRR. The layup track behind the eastbound platform is not a remnant of anything – it’s been in active use forever to store work train equipment used to perform track and third rail maintenance.
The tower is closed to personnel but it is still used to house signal and switch equipment. “Queens” was always and still is the name of the tower. On the LIRR, interlocking towers were normally named as a shortened version of their locations. Besides “Queens”, other examples are “Jay” (west of Jamaica Station), “Hall” (east of Jamaica, so named because years ago the next station was Union Hall Street), and “Valley” (at Valley Stream Station).

Route 24 extends _continuously_ out to NYS Route 110 in East Farmingdale. There’s a non-contiguous segment in Suffolk County, from Calverton to Hampton Bays.

I grew up in QV an Lived there and moved out in 2009. I miss it dearly, Quite a Unique slice of NY City Life.

Thank you for this piece

I was born and bred on Springfield Blvd. between 89th and 90th Avenues. I lived there from 1949 until 1971. Growing up in QV was great. Going to the “Avenue” to Woolworths, deciding to go to the Queens Theater or the
Community. Seeing a double feature for 50 cents!The library on 217th Street! Times have changed!

I was living in Queens Village from when I was born up to 18 years old. I went to OLL (Our Lady of Lourdes) and Martin Van Buren High School. I worked at the Community Movie Theater
as a teen. It wasn’t mentioned in the article. I liked Queens Village and have very fond memories there.

What a nice surprise. I lived in Queens Village from 1962 until 1976. While i know i could never go back I will always have such great memories, back to Memorial day parades on Jamaica Ave. Good old incarnation school, King Kullen & the A& P, PS 109 & 135 and of course Gabby’s pizza.

I grew up in QV.!936 to 1961.My address was 93-26 Vanderveer st.I thought that we were very special because I sweet had a name not a number.I went to PS 109,at that time just a grammar school.At 109, I had the first of my most memorable teachers,Miss Adams.She was great, seemed to know everything ,She taught English,math,and history.She also imbibed me with greta civic pride.From there,I went to Jamaica HS.I did well with many good teachers but especially,Miss McCormack,my Latin teacher.They don’t make them any more like Miss McCormack.I proceeded to Queens College.Too many great teachers to mention. except for Dr. Harold Blatt.He taught biochemistry and he secured a place for me at Cornell med.( I got into 5 med schools prior to my acceptance of Cornell).I graduated magna cum Laude from QC and Phi Beta Kappa.. Not so bad for a poor boy from Queens.
I essentially left 93-26 for the last time as i started my medical career and training.. Mom moved out in the 80’s to be closer To ny sister who lived in Rochester NY. She never went back.I had an opportunity to see my house one last time in the late nineties.It still stands there with nice improvements and is home now to another generation of hopefuls. JohnL. Krause,Jr. MD

I lived on Edmore Ave from 1949 to 1961 when I left for college. The”block” was our playground and the neighborhood. was where we roamed. From early age I could go outside to neighbor’s houses, play in backyards, play street games, walk to PS 33 in the mornings and home for lunch. I would walk to Braddock Av to Seekamp’s deli to get whatever my mother needed each day. When old enough a two wheel bike allowed me to explore to the edges of town. Going to Woolworth’s to dream about the next doll clothing I could buy or reading every Saturday at the library on 217th street.
Much simpler times.