Concrete Plant Park, built along the Bronx River between 2004 and 2009 for about 10 million dollars (much of which was spent in removing petroleum-tainted soil from the site), runs on the west side of the Bronx River replacing what used to be a concrete batch mix plant between Westchester Avenue and Bruckner Boulevard. Edgewater Road, which used to lead in and out of the plant, in existence from 1945-1987, has found reuse as a park path. The silos, hopper and conveyor structures from the plant have been left in place. 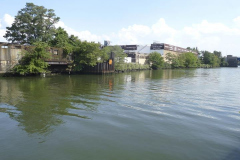 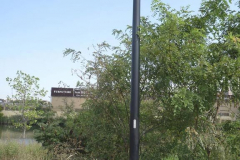 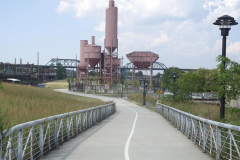 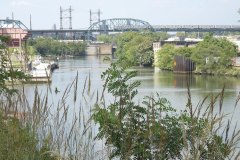 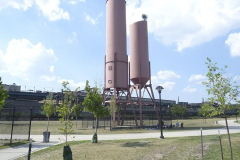 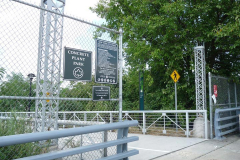 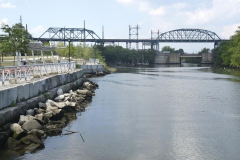 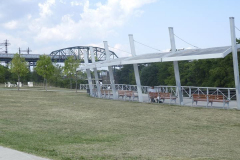 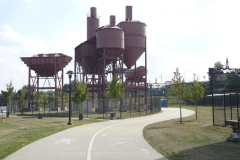 Within the park, the silos hold your eye. Painted a matte kidney-bean pink, the silenced concrete works look like sculpture as much as infrastructure. Even the somewhat clunky concrete bases, which were recast by Parks, add to the composition’s abstract quality. They also provide shade while the new trees mature.

[Landscape architect James] Mituzas said that Parks hopes to eventually use the silos as “green machines,” as water cisterns or power generators with attached photovoltaics, but in the meantime the Parks department spent much of the project’s funding removing petroleum-tainted soil from the site, a former brownfield. “Most of the money went to clean the site,” he said. “It’s come a long way.” Archpaper

In general the park’s a good idea, but I can’t help but think that there were once thousands of jobs along the river (but also lots of pollution and disease) that was replaced by idlers, strollers and frisbee catching dogs. Where did the jobs go?

Adjacent to the park is the ruins of the Westchester Avenue station of the now-defunct New York, New Haven and Hartford Railroad, running along still-active tracks used by Amtrak on its way to New England. There is a proposal to restore local service by the commuter railroad Metro-North along these tracks, but whether the station house would be restored or demolished for new service is just guesswork in 2021.

THE STREETS OF BROOKLYN NAVY YARD

Good question where did cement mfg go? China #1 by far over 60% of the worlds production. A yes cement production accounts for 8% of CO2 emissions. India #2 and Iran #3. China and India fueled by state sponsored massive housing initiatives to urbanize their population. Iran because their cheap oil and oil driven Middle East urban initiatives. The 2008 mortgage crises caused the US to actually lose its share by 1%.

My first project with the Corps of Engineers was dredging Bronx River. The material was tested and we were able dispose of it at the Mud Dump 6 mi. off Sandy Hook. Those days are over. The mud dump has been closed for years. I remember Bustello Coffee, Loral Electronics besides the concrete plant.

At the very least the RR station (new or old version) could maybe be made to include a slightly more direct way for folks to reach the park from the neighborhood to the west.

This train station will not be revived, but there are plans for a new train station at Hunts Point, near the 6 express subway station.

Looking at it, not a cement plant (which is the dry powder), but concrete (which is always made locally). Cement plants take limestone in huge kilns and make it into cement

This is in the *east side of The Bronx; Soundview to be exact.