AVENUE U IN BRIEF

I was slouching around Gravesend for a couple of hours the first day of June, after taking the D train in from Manhattan. I was going to stay longer but I had a wifi problem and had to hustle home to call my provider and get it repaired. (I despise being without wifi when out walking, which makes me wonder why I held out so long, not obtaining it until 2015.) I work three days per week these days, which is better than none and not as good as five, which may be happening later in the year. I was in Gravesend primarily because I had a yen for a couple of squares at L&B Spumoni Gardens on 86th Street. Their Sicilian pizza is cut in squares and is made with cheese on top of the crust and sauce on top of the cheese. Thus it is best to have some napkins on hand. If I have one complaint with L&B it is their weird window arrangement, one for whole pies and another for individual pieces. You are snapped at if you’re in the wrong line. I believe making the customer comfortable should be high on the list of priorities, but I’ve found that certain places, such as L & B and McSorley’s in Manhattan have a different philosophy. Anyway, I keep going back, since I like the pizza, and they get my money. 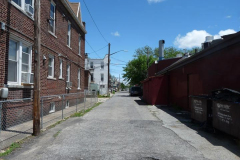 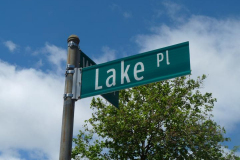 I can’t resist taking a photo of Lake Place whenever I’m around here. It’s one of the oldest roads in Gravesend and Brooklyn itself and once extended from the heart of Gravesend at Village Square west to the Narrows. It’s paved and is lit by the Department of Transportation but has no sidewalks. Since 1915 it has been interrupted by the open cut of the Sea Beach (N train) and the east end as far as Van Sicklen Street has been privatized into a driveway. I wrote about Lake Place early on in Forgotten NY, in 1999. 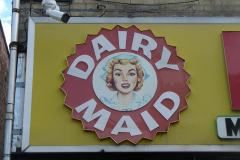 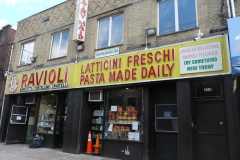 Till recently, Gravesend, like adjoining Bensonhurst, was a mainly Italian neighborhood. There are still remnants of that legacy such as Meucci Square (the true inventor of the telephone) at Avenue U and 86th Street, and Dairy Maid, which produces pasta and Italian delicacies and features some impressive signage. Named on the sign are manicotti, large pasta shells stuffed with white cheese; tortellini, ring-shaped pasta stuffed with meat and/or cheese; cavatelli, small oblong-shaped pasta; latticini freschi, fresh dairy products; translated on the sign.

Village Road North, the street on the north side of Village Square, features some colonial-era dwellings. #32 VRN is somewhat the worse for wear with boarded up windows. It was originally located at McDonald Avenue and Gravesend Neck Road, and reportedly served as a school when President George Washington visited it in 1789.

Next door, at 38 Village Road North you will find the Ryder-Van Cleef House, originally located at 22 Village Road North. It was moved in 1928 to make way for a playground that is still there. The house was built about 1840 by Lawrence Ryder and was owned later by his son-in-law John Van Cleef.

Amazingly neither of these buildings has been designated by the Landmarks Preservation Commission.

This plastic and vinyl sign for a pharmacy at #801 Avenue U has been here for a few decades. It uses the ancient ‘vessel with a pestle” symbol, and the Rx abbreviation for “recipe.”

Rarely are firehouses in NYC built on street corners (the old Ghostbusters firehouse in Tribeca was, though) but here’s the exception to the rule, Engine 254/H&L 152 at #901 Avenue U. 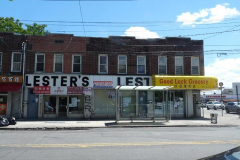 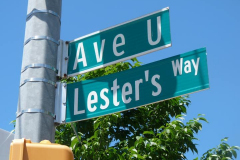 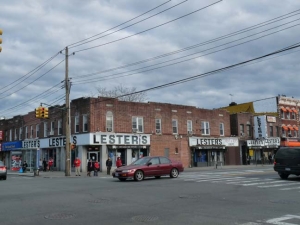 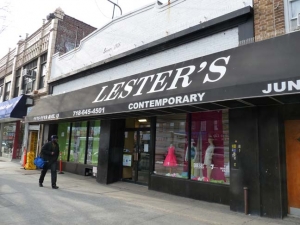 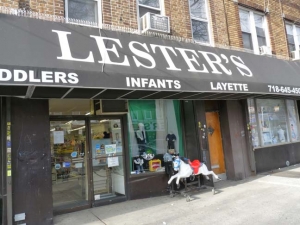 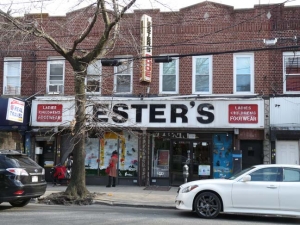 I was dismayed to see that the Lester’s mini-empire at Avenue U and Coney Island Avenue seems to be kaput. Once, nearly a dozen storefronts bore the name. It is actually a chain of stores founded in 1948 by WWII veteran Lester Kronfeld and wife Lillian; other locales can be found in Long Island and Westchester. I wonder if those stores are still in business.

Lester Kronfeld did get the street corner named for him in 2018.

I have to stay out of donut shops these days, but I still get to enjoy the old signage.

In 2018 an application was made to tear down #32 Village RoadNorth and its neighbour, in order to consolidate the lots and
build a Yeshiva: https://www1.nyc.gov/assets/brooklyncb15/downloads/pdf/plans/2018/30_32villagerdnorth.pdf

If I had a couple million I’d buy it and restore it to c. 1790s
appearance, but that’s just me.

Thanks for comin’ round!

The Cyrillic store sign is a combination of Russian and English that says Stolovaya, which translates to “Cafeteria.”

Thank you for the Gravesend update. I read it wistfully…. I grew up on west 7th off of Avenue U in the 60’s and 70’s! Great memories.

It used to be common among drugstores to display odd shaped glass vessels filled with colored water in the front window.
What that meant,I dunno.A laboratory?

I grew up on Long Island in the 1950s/60s, and the old EJ Korvette in Carle Place used to have them in their pharmacy department. I have always thought that they indicated a “compounding pharmacy,” thought that might always be an error.

I think they were general indications of a “chemist” or pharmacy, meaning that they mixed or distributed drugs. I don’t believe it had a specific meaning. Just showed you that they were scientific and knowledgeable “chemists”, and the colors also looked attractive and impressive.

Great to see a photo of Engine 254. My uncle ,the late Ed Walsh, spent many years here. I have his ancient leather helmet, emblazoned with 254, as a memento.

You can tell the pharmacy sign at #801 Avenue has been around awhile, as the phone number displayed on the left shows only seven digits. These days with all the overlays, the area code is very important, and I assume 10-digit dialing is standard in NYC.
I always thought the “Rx” is actually “Px” and stand for prescription.

Gee Kevin, who would have thought that you’re so thin-skinned that you would delete my two comments because I pointed out errors in tour text. Why let historical accuracy get in the way of your story, right?

I don’t “get” your constant hostility. The error was inadvertent, it was late at night, and I corrected it.

Joe: They hear only what they want to hear & disregard the rest. Seth Barron would be treated no differently than you which is why NYC’s “last days” have arrived:

I won’t point out your spelling errors in your little jab here.

It’s still unfortunate that Gravesend did lose some of its colonial houses around Village Square to what’s there now, but development junkies probably claimed that their historical significance was nothing more than an excuse by NIMBYs to stop new development.

Next time you’re around Gravesend be sure to check out the dilapidated old building on Village Road South with strange seahorse Caduceuses.

Also I have seen a fair number of Cyrillic signed businesses in Brighton Beach.

It doesn’t look like you can fit a shoehorn between #32 VRN and the house next door. Is that really how close they are, or is it just the camera angle?

Kudos on the fantastic site & continued great explorations ! Ave U just has too much good food – ! RIP Jay & Lloyds. & – I checked out Pan Am Road thanks to you via 1979 Vespa 2 weeks ago, as well as The Hole – very cool – ty & keep up the great writing & exploring !

The sign for prescription is RX, stands for Latin “recipe” which means “take,” the first word of instructions or preparing a medication or food or anything else, “take…(this,)and (do this)…
Cognate is “receive.” X stands for the ingredient to be taken in the first stem of the prep.