On two recent days, braving ungodly heat in the upper 80s with matching humidity, I marched around with the camera in Ozone Park, specifically up and down Liberty Avenue and 101st Avenue. I had last walked 101st back in 2008, when I found a plethora of ancient store signage. I plan on presenting these, and what replaced them, on another day; since I’m desiring an “easy” weekend, I’ll do a relatively short post today about Liberty Avenue, its elevated train, and the ancient street names its signage preserves.

When you ride the A train on el above Liberty Avenue, you are actually riding the easternmost section of the old Fulton Street El, which was built in the 1880s from the waterfront at the old Fulton Ferry and extended out into Queens in 1915. The line was closed in sections on Pitkin Avenue and Fulton Street in the 1940s and replaced by an IND subway as far as Rockaway Avenue in 1936, and then extended under Pitkin and Pennsylvania Avenues in 1948. In an era when the then-Transit Authority still had the will to get creative, the IND was extended out to Lefferts Boulevard and the Rockaways in 1956 by employing the old elevated structure atop Liberty Avenue, building a new station at Grant Avenue.

The first elevated station along Liberty Avenue east of where it emerges from the tunnel is at 80th Street. Even though the station was recently renovated, its signs retain its old Hudson Street name (which the newly renovated stations on the Astoria Line do not). The MTA sign shop even went so far as to include Hudson Street on the small signs on station columns.

Here’s an excerpt from a Belcher-Hyde map of this area from 1918 (note, the el came to Liberty Avenue in 1915; Liberty is the red line in the center). I have circled Hudson Street, now 80th Street, and Boyd Avenue, now 88th Street, which has also been retained in station signage.

As you can see in 1918 Ozone Park, and Woodhaven north of it, was a bit muddled as it was filled with real estate developments notated on the map such as Liberty Heights and Eldert Park that have been lost to time as they knitted into the overall grid. Not only were the numbered streets formerly named, they also had older names before the newer names. I wish the names had been preserved and not numbered; Hudson had formely been Bengal before it became 80th. 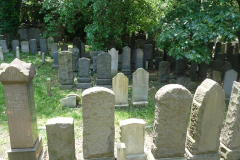 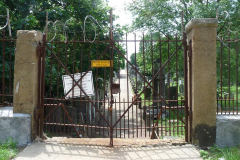 A trio of Jewish cemeteries, Mokom Shalom (“Place of Peace”), Bayside (named for its proximity to Jamaica Bay) and Acacia (named for the trees, most likely) can be found between Liberty and Pitkin Avenues and 80th and 84th Streets. The former two have been here since the 1860s, with Acacia joining them in the 1890s. Unfortunately all three cemeteries have been under relentless attack from local vandals since the 1970s, and some parts of the cemeteries remain in decrepit condition. The barbed wire seems to be of little deterrence. 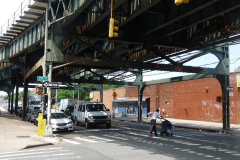 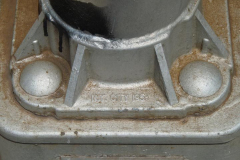 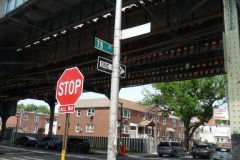 This stretch of Liberty Avenue has a collection of cylindrical Dwarf lampposts installed in 1959 (the date is embossed on the base). These under-the-el lamps are rapidly losing out to davit poles (in which the mast curves instead of supporting a mast) in other parts of town. What’s surprising is that a full-size version was produced as well.

There are a couple more very old street names represented along Liberty Avenue but I have a couple of things of interest first. I thought this was the front entrance of catering hall Villa Marcello, but this chalet-type structure is actually the back door; there’s a much grander entrance on Rockaway Boulevard and 97th Street. Good thing, too; the rumble from the el trains must be disconcerting in this spot.

Next to Villa Marcello, there’s an MTA electrical substation, and you can see the spur track built in the 1950s to allow subway trains onto the erstwhile Long Island Rail Road tracks to the Rockaway Peninsula. LIRR service to the Rockaways began during the 19th Century, but a fire caused irreparable damage to the bridge across Jamaica Bay in 1950, and the LIRR sold the right of way to what was then NYC Transit Authority — causing the TA to extend IND service to both Lefferts Boulevard and the Rockaways in 1956. It was the largest addition to the subways since the IND completed most of the 6th Avenue line in 1939-1940, and would be the biggest until the Q was extended up 2nd Avenue in 2017. 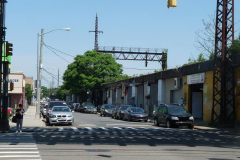 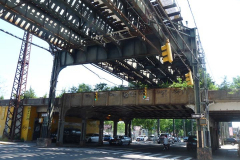 I have sometimes spoken about Transit Hubs That Should Have Been such as the LIRR Montauk Branch, now strictly freight, crossing the J train on the Jamaica el in Richmond Hill, or even one that exists and does very well in Woodside, where the Flushing El #7 train crosses the LIRR main branch, a stop for every LIRR train in the system. (There is even a plan advanced by NYC comptroller Scott Stringer that would allow Queens residents to pay the same amount for LIRR trains as they do for subways, but don’t hold your breath on that one.) Here’s another such crossing, this one in Ozone Park, where the abandoned LIRR Rockaway Branch crosses the el on Liberty Avenue. Reactivating the LIRR Rockaway Branch to connect with the Queens Boulevard subways has often been mentioned. but it would cost billion$. (Bronx residents can look forward to the reactivation of several disused stations for Metro North customers.)

The New York City Transit Authority is now a division of the Metropolitan Transportation Authority in 1968, which dates this sign to before that.

There are two more stations on the Liberty Avenue El that retain, or at least are co-named, with currently numbered streets: Oxford Avenue (104th Street) and Greenwood Avenue (111th Street). This Belcher Hyde 1918 map shows both. I have circled the names in red and marked Liberty Avenue in blue. The map is also fascinating in that it shows the various rel estate projects then in development; few of the names have survived. 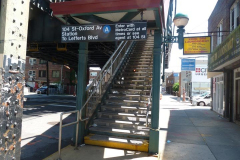 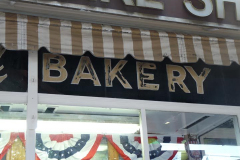 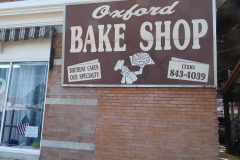 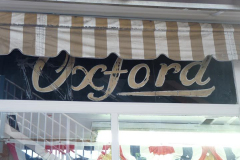 In an amazing coincidence I’ll get to later, the Oxford Avenue name is survived by the Oxford Bakery (or Oxford Bake Shop as it is called now) at Liberty and 104th. Some old fashioned gold leaf signage can still be seen under the awning.

The Oxford Bakery in 1940. The establishment may have passed its centennial, or soon will.

A gabled, porched dwelling that was likely built before the elevated train arrived in 1915.

Competition for the Oxford directly across the street may offer Guyanese delicacies. I’ll get into it when I discuss Liberty Avenue on a future page, but eastern Ozone Park or south Jamaica (take your pick) features immigrants from the South American country of Guyana, especially the Indo-Guyanese, immigrant descendants of Indian laborers who moved to Guyana in the 18th and 19th Centuries. Thus, Indian tradition, religion and cuisine are especially prevalent here. 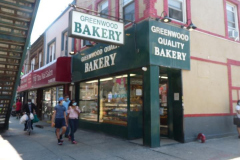 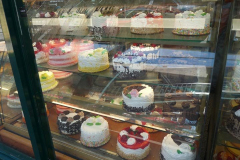 Here’s the coincidence I was talking about. The Greenwood Avenue name is preserved on station signage but also… in another bakery! Grenwood Quality Bakery seems to be rated lower than Oxford. I have to stay out of bakeries, as my blood sugar has been borderline.

Some quick, though definitely not definitive research. It appears that the Greenwood bakery predates the Oxford bakery. I’ve found references to a Sunlight Bakery back to April 1921, but cannot ascertain as to when Greenwood came into being. As for Oxford, the earliest mentions of a bakery at the location was in November 1929; with the name Freilander attached appearing by 1935. Prior to this bakery an earlier commercial tenant appears to have been a shoe store. The earliest mention as Oxford did not come up until 1944, but obviously it was already open by then based on the Municipal Archives tax photo. However it may have simply been a change of name at the time as Freilander seemed to still be involved with the establishment ’til at least 1943. More as it comes in, if anything else does…

Great posting. It’s interesting that while Hudson St., Boyd Avenue, Greenwood Avenue, and Oxford Avenue, exist today only as A train station names, the other two stations on the Liberty Ave. elevated in Queens take the opposite approach. Rockaway Blvd., between 88th (Boyd) and 104th (Oxford) Streets, originally was also called 96th Street in deference to one of the north-south minor streets that intersect Liberty Avenue. The station location is also bisected by a very important north-south arterial boulevard, the combined Woodhaven-Cross Bay, which changes names when it crosses Liberty. However, the station name tablets have never recognized Woodhaven-Cross Bay. Lefferts Boulevard, the final stop, was for many years also called 119th Street in deference to its location in the street grid, but that moniker has not been used for the last fifty years. Old subway maps of 1920s vintage called it “Lefferts Avenue – 119th St.” The boulevard moniker is not quite accurate because Lefferts is no Woodhaven. It’s rather narrow, but does host a major north-south bus route, Q-10 which connects the Kew Gardens IND subway to JFK Airport and was the primary public transit route to JFK prior to the AirTrain.

The Villa Marcello looks like your classic “red sauce” joint.

commuted to manhattan 25 yrs on this train from lefferts blvd. lived on 120st n 109 th ave…oh such great memories of liberty ave