RETURN OF THE NASSAU CROOK

BEFORE I talk about the lamppost I plan on discussing today, I’ll say a few words about the building that, in effect, provides its home. (Don’t worry, I’ll explain.) By the way…the lamppost shown in this photo is one of a set installed on the streets that surround City Hall Park in 2001. They can be described as economy-sized Twinlamps, larger than the ones that were used on 5th and 7th Avenues as well as roadways with center medians beginning in the 1920s through the 60s, with these bearing extra ornamentation.

This building, #41 Park Row, at Park Row and Spruce Street, is historic in its own right. Park Row bordering City Hall Park was once lined with buildings and offices home to the newsrooms of NYC’s once-numerous daily newspapers. Most of those newspapers are defunct and their buildings torn down, but this one, completed in 1889 with George Post the architect, is the former home of The New York Times (or New-York Times, as it had a hyphen when it was located here). The building replaced a former Times building on the same spot that was built in 1857 and newspaper operations continued in the old building while the new one went up surrounding it.

The Times building had replaced the Brick Presbyterian Church, which stood here from 1766 to 1856. A church of similar vintage, St. Paul’s Chapel, is across Park Row on Broadway between Fulton and Vesey. The Times moved uptown to West 43rd Street in what was newly named Times Square in 1904, while Pace College moved in in 1952. 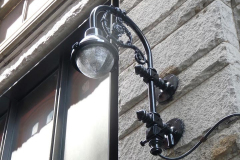 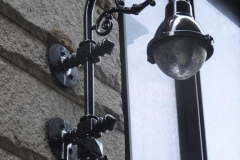 For me of course the chief attraction is on the Nassau Street side of the building, which includes a wall bracket Bishop Crook, the last extant specimen in New York City. I am not sure how frequently these wall bracket lamps were deployed, but they must have been useful for sidewalks or narrow streets. You can still find Bishop Crook “heads” on the Macombs Dam Bridge, but these are in a completely different style.

When I first encountered it back in 1999, this particular number was still affixed to the Times building, but it was missing its glass reflector bowl and did not appear to have worked for several years.

When Bob Mulero, NYC’s King of Lampposts, first encountered this light in the 1970s, it did have its reflector bowl and the photocell indicated that it still lit up at night.

This bracket is indeed listed in my pamphlet of extant NYC lamp styles in 1936, and the notes mention it was used on the 7th Avenue ramp to the Macombs Dam Bridge uptown.

In 2019 or 2020 I was disappointed to learn that the Crook had disappeared from Nassau Street. However I had no reason to fear. The Department of Transportation had it in the shop for repairs, and from what I see, a masterful job was done. It has a new black paint job, and most notably, its 1950s-era Westinghouse AK-10 “cuplight” has been outfitted with an LED lamp (though I may have to confirm that with a night visit). To my knowledge this is the only occasion in which a Westy cup has been so updated; as a rule, dedicated LED fixtures generally replace them, the last occasion being when the cups under the 10th Avenue High Line overpass at West 30th Street were replaced by LEDs. Bravo!

Photographing them here with a full size Crook in the background, one of a brace of them deployed along Nassau Street beginning in the 1990s.