WHEN MANHATTAN GIVES YOU LEMONS

I was pacing around the rim of Hudson Yards last week before joining the boys at Feile on West 33rd. Normally the place is jumping and tables were at a premium as it handles pregame crowds at the Garden. During the Covid Pandemic, though, we had our pick of tables. The gutter tables outside were more populated (even in healthy times, why people eat outdoors in Manhattan, in the humidity and honking cars, eludes me). I was in the public area of One Manhattan West, one of the towers on the rim of the yards atop the Hudson River RR tunnels, when I spotted some large yellow globules in the distance.

Mind, I’m a sucker for yellow, it’s one of my favorite colors, along with orange. I have the kind of mind that attaches gender to colors, numbers and letters, and to me, yellow is female (as is white). I am mystified why yellow became symbolic of cowardice. My bathroom has its original 1941 black and yellow tile job, and no one seems to like it but me. I also enjoy lemons. I can suck on sliced lemons as a hand fruit; I like sour fruit flavoring. My enjoyment of yellow does not extend to fried eggs or any method of making them. Yeccch. 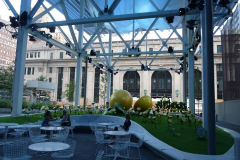 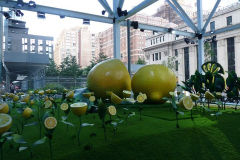 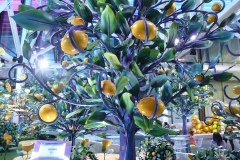 The large globules at Manhattan West are large plastic lemons and lemon trees, created as part of an exhibit called Citrovia. It’s actually an innovative way of sprucing up a construction scaffold, as another massive tower called, quite imaginatively, Two Manhattan West, is under construction above it. Most of the Manhattan west public plaza is currently barren, awaiting restaurants and shops that are supposed to eventually open. It’s nearly completely surrounded by enormous glass tower surfaces except for the 9th Avenue opening, where it faces the stolid Farley Building, whose interior was recently fashioned into the Moynihan Train Hall.

Citrovia is not all plastic lemons, there are brilliantly colored lemon trees and (fake) old fashioned wooden crates that you often see in fruit stores. The exhibit was deigned by a firm called The Cuttlefish, Inc. who employed Adirondack Studios, which also designed some of the rides at the Disney amusement parks. There is also supposed to be a lemon scent, but it either wasn’t turned on or my balky bulbs didn’t pick it up.

I’ll never be a fan of Hudson Yards or Manhattan West, but I do like lemons.

The One Manhattan west people have vouchsafed an exterior walkway. I always feel a bit “off” when I’m on these public easements; these places were not built for either my bank account or esthetics, and I feel like a perpetual trespasser. This is a view of West 31st Street from the walkway, and you can check out a 34th Street Partnership lamppost up close and personal.

Checking out the walkway itself; not a lot of souls around.

Some of the older buildings that are staying put, at least for awhile, in the new! and improved! Hudson Yards area on West 31st Street near Dyer Avenue.

The smokestack, which faces West 30th, mystifies me so if anyone can tell me what it’s doing there, Comments are open.

Looking south on 10th Avenue toward the recently opened to the public High Line spur and new Hudson Yards buildings.

Walls of glass await you on the new 10th Avenue looking north.

One of the area holdovers s #450 West 31st, home to a fashion photographer, eye surgeon, and formerly the home of the American Bookbindery.