I’VE written about the Excelsior Power Company building before since I have known about it for years before Forgotten New York was a twinkle in my eye. But now, in 2022, there’s something special about it, because for the first time in years, it’s actually visible. Much of Gold Street in lower Manhattan has been completely shrouded by construction sheds but in February, the portion obscuring the Excelsior has been removed, at least temporarily, and so we are vouchsafed a view of this notable building once again.

Gold Street weaves through Lower Manhattan on a not-quite-straight narrow line, reminding us that this part of the city was not built for automobile traffic. Although immigrants may have been regaled with stories about how the New York streets were paved with gold, Gold Street has nothing to do with the precious metal. Instead, it was named for a flower, the celandine, called gouwe by the Dutch. The British, who had a unique talent for boiling down Dutch names for easier pronunciation, eventually Anglicized the name to Golden Hill; it was the site of a confrontation between the Sons of Liberty and British troops in 1770, presaging the war to come.

The Excelsior Power Company Building was designed by William Covington Grinnell, the architect’s only known design in the city. the Excelsior Power Company Building’s above-ground stories were rented to tenants, particularly those in industrial sectors, while the steam plant was in the basement. For the full history of the building, see the Tom Miller “Daytonian in Manhattan” page.

Look at that intricate 1880s-era lettering! This is likely the largest extant example of it you will find in New York City. Just wonderful. And that carven “1888 A.D” below it is almost as good, look at that horizontal serif at the apex of the “A” and those roundels that frame the sign. 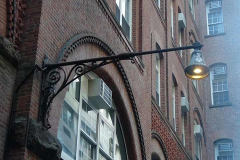 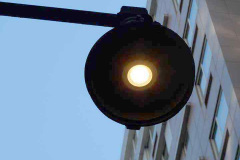 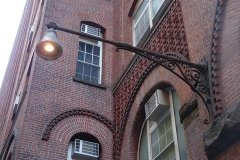 Next to the cast-iron sign, a 1910s-vintage wall-bracket lamp, with original metal scrollwork and incandescent luminaire, can still be found. In the 1940s, it was outfitted with a cone-shaped “junior bell” incandescent light, which had not lit up for quite a few years. Lo and behold, it now has a new bulb, which I found out about because it was “dayburning.” I do wish a glass reflector bowl could have been found to complete the renovation, and the lamp could use a paint job but at least it’s working again. It’s likely the only working “junior bell” remaining in NYC.

Another feature of note: this was once the freight entrance; Belgian-blocked sidewalks are often tell tale signs of this. The large bricked arch gives that away as well. In 1888, horse drawn wagons would have entered here, and had rather more maneuvering room as Gold Street was not lined with skyscrapers as it is today.

Because of that it is rather difficult to get a picture of the entire building for the last few decades; this is about the best you can do.

Hopefully, this exterior will not regain its sidewalk shed and be available for architecture aficionados to delight in for decades to come!

Great preserved sample of the Art Nouveau lettering style. The 1888 AD must have been added later. Perhaps moved from another part of the building?
There is another vintage bracket like this one with a different lamp at 41 Wooster Street (seen on street view).

There are about a dozen such brackets in existence.

Or the 1888 AD panel was added when the freight entrance was infilled?

Anyone with any idea what that font is?

Ah, nevermind. The comments didn’t load until I posted my comment. Art Nouveau

You wax passionate about the la m p and facade typography but I would be passionate to see and photograph the engine and genertor in the basement. Sure it is still there because it was built on site and way too big to move out. An old Edison DC dynamo! I bet the big steam engine down under the Cable Bldg is still there, too!

So if I go buy some Letrasets in that style of lettering what type do I tell the clerk?

The lettering was probably an original work of art created by hand with mechanical drawing tools, based on a type font of the era. The final art would be used to cast the letters in metal, then affixed by screws to the substrate. 1888 AD is cast in terracotta. Letraset stopped making the press down type sheets around 2016. Still sold online from individual sources. This is not one of the fonts available, though there may be something similar.

Sidewalk sheds are a curse of our times. I swear there are rules about how long they can be up, and how many can be in the same block, but as far as I can see, both of those rules are flouted. There’s one shed at Lexington and 76th that I swear has been up for a decade, and it seems like sidewalk sheds or other impedimenta are constantly in front of the Empire State Building. That’s why I like this post. Seeing something in the full, fresh air is exhilarating.

The illustration in Daytonian shows that the “1888” plate was moved from an arch to the right of the entrance.

The Museum of the City of New York has a nice photo in their digital archives showing the date plates before they were moved: Excelsior Power Co. Bldg ca. 1974 Note that the year and the “A.D.” pieces were flipped when they were reinstalled.

Whatever did happen to the Excelsior Power Company?

Excelsior was acquired by the New York Heat, Light and Power Company in 1895,[20] and the combined company continued to operate the plant as a power and steam generating station.It became part of New York Edison Company. New York Heat itself was acquired in 1898 with a firm colloquially called The Power Company,which in 1901 became part of the New York Edison Company. The building was used as an electrical substation through at least the late 1940s. New York Edison’s successor, Consolidated Edison, had decommissioned the Gold Street substation by 1961, when it bought the adjacent six-story building at 82-88 Fulton Street.