EVERY so often when I’m in Jackson Heights, I make my way over to 31st Avenue and 81st Street to see how the Crooked House of Jackson Heights is doing. It’s a tidy, well kept private dwelling on the northeast corner of the somewhat busy intersection. I have no idea who owns it. Instead of facing either 31st Avenue or 81st Street, it instead is positioned in a diagonal fashion toward the corner. Not a whole lot of private homes are positioned like this. I call it the Crooked House of Jackson Heights. 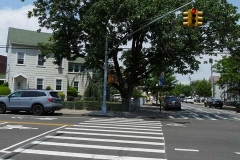 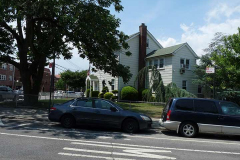 The unique positioning gives the house a rather substantial front lawn facing the corner. Usually, when a house is unusually positioned there’s a story behind it and in this case that’s no exception.

Here’s a 1909 map excerpt of Jackson Heights (ignore the blue box; a mistake I made when screen shotting it). Amazingly what is now Jackson Heights remained undeveloped well into the 20th Century and presented a somewhat wide expanse of sparsely populated meadows between the towns of Long Island City and Flushing. That all changed in the late 1910s and into the 1920s when the Queensboro Corporation built the grand apartment buildings Jackson Heights is known for today. The street grid was then filled in and houses arrived and by WWII, Jackson Heights was fully built out.

But in 1909 only a few roads and a couple of trolley lines crossed what was then called Trains Meadow (the derivation is unclear). At the bottom of the map is Jackson Avenue (Northern Boulevard) and at the top, the Astoria-Flushing Turnpike (Astoria Boulevard). The part of “Old Bowery Road” that hosted a streetcar line to North Beach survives, as Jackson Mill Road (though the mill is long gone).

But the road cutting northeast, Trains Meadow Road, has left little trace. The road itself was laid out as early as the 1670s and ran from Woodside to Flushing Bay originally, but as the overall grid was built the road ceased to be important and fell into disuse (though had it survived it would have made a good shortcut through the area).

You can also see, on Google Maps, a few other property lines follow the same angles.

Look at Google Earth satellite view of the intersection. The building across the street on the SW corner was built on the same diagonal. But no others are.
There’s several references to “Train’s Meadow” in the Long Island Star back to 1820. The possessive form suggests someone named Train owned it. Starting in 1832, newspapers sometimes called “Train Meadow.” By 1888 it’s sometimes “Trains Meadow.”

Look west a few blocks, the new row houses are at the same angle, or the property is.

The Post Office in the Jackson Hts. shopping center was (maybe still is) the Trainsmeadow Station.

Also Ehret Avenue, seen hooking north from Astoria Blvd. used to go to North Beach but no sign of it is left today (unless someone has a fascinating new find…)