JAMES J. Walker Park, today facing Hudson Street between St. Lukes Place and West Houston Street, was once an uptown branch of Trinity Cemetery,  established in 1801 as a churchyard for the long-razed St. John’s Chapel; it was bordered by Hudson, Carmine, and Morton Streets. Meanwhile, Leroy Street went only from Hudson to West Street. Leroy was extended past the cemetery in 1845, with the connector named for St. Luke in the Fields Church, still standing at Hudson and Grove.

Though the cemetery inspired Edgar Allan Poe to write several macabre tales when he lived in the area in the 1830s, it was closed by 1898 and turned into Hudson Park, a high-concept collection of lush marble terraces and gazebos built by renowned architects Carrere and Hastings. 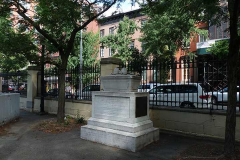 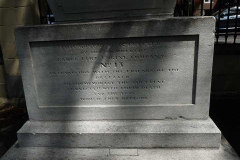 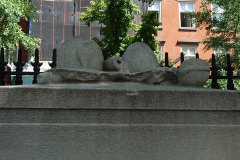 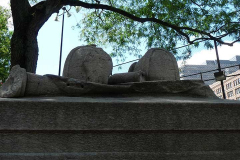 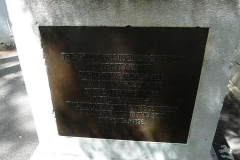 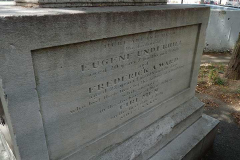 Though some of the interred were moved to cemeteries like Uptown Trinity, some never were and remain in place underground. The only remnant of the cemetery visible to the eye is this firemen’s memorial, set in place in 1834, honoring Engine Co. 13 firemen Eugene Underhill and Frederick J. Ward, who were 20 and 22 years old, respectively. They perished fighting a blaze in Pearl Street, crushed to death under a falling wall. When the plot became a park the memorial was moved to the St. Luke’s Place side.

This horse-headed hitching post may be the real McCoy moved from elsewhere, or it could be a replica. Real ones do pup up in NYC’s outlying areas and in cemeteries.

ACROSS THE CREEK: JULY 4th IN GREENPOINT

The park is named after Mayor James (Jimmy) Walker, whose residence was on St. Lukes Place, facing the park. Following tradition, the wrought iron fence in front has a pair of lantern posts which flank the front stairs. They were lighted (with green glass) to identify the permanent police post in front of the Mayor’s house. They are no longer “police green”.

There’s a scene in the infamous 90s movie Kids where the youngsters casually break into the park’s pool at night and swim and make noise, with no attention paid them by anyone.

Jimmy Walker (1881 – 1946) was a Tammany Hall politician who served in both houses of the New York State legislature and then was elected New York City Mayor in 1925. He was re-elected in 1929, defeating Fiorello LaGuardia, but subsequent scandals forced him to resign the Mayoralty in September 1932, a move engineered by New York governor Franklin D. Roosevelt, who was running for President at the time. The Walker Administration scandals led directly to the election of Fiorello LaGuardia as mayor in 1933.

Despite Walker’s resignation under fire, he did have some notable accomplishments, notably in the transportation area. He was mayor when the NYC Board of Transportation began building the Independent Subway System (IND).

While taking classes this summer at the Carpenters Union school ( diagonally across from the park at 395 Hudson) , I occasionally came to here for lunch. Thanks Kevin for teaching me its history.

I played softball at this park back in the days.
It was a crappy field with trees that hung over the outfield fences. They were a menace to the game. Flyballs into the trees were either do-overs or in play. Go figure.
A real joke.

Was a great field to play softball back in the 90’s. Line drives only. balls hit over the fences were outs.

It’s not often that you see a Forgotten NY article that almost has your living room windows in the title photo. I love living directly across Walker Park. In addition to having the satisfaction of knowing that a big b building will not be erected in front of you, it’s great to see the constant flow of activities that go on in the field. Little League, softball, field hockey, soccer, and most enjoyably, people letting their dogs run loose. The downside is the increase in the homeless population in and around the park. There are the occasional needles that have been found at the back wall of the bocce court, and homeless men sleeping on the bleachers at night.

I used to work at 201 Varick Street. I remember the stink of the ginkgo trees at Walker Park on a warm day.