Take a walk down 11th Avenue, south of the Chelsea Piers, past 14th Street. You’ll see a semicircular tower of rusting metal, seemingly awaiting the wrecking ball, at the remains of Pier 54. What’s so special about it? 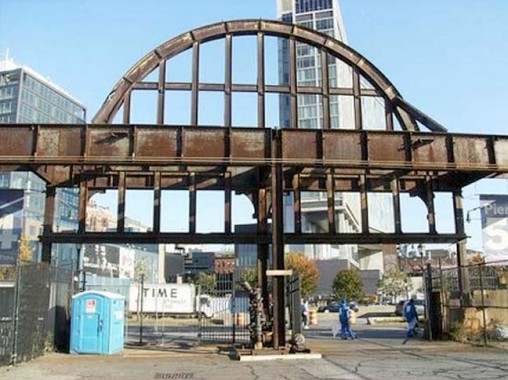 View of the gate from Pier 54.

This gate is the last remnant of a terminal building. Having been preserved by serendipity, it’s now part of a public park on the site, now part of Hudson River Park.

This long, open pier is a refreshing blank slate for runners, walkers and event planners. It has accommodated a huge variety of special guest events, such as the celebrated Ashes and Snow art installation, MTV concerts and the annual Heritage of Pride Dance Party. HRP

Although the pier itself was in fact a Cunard Pier, the White Star Line leased the property when it needed to, so I’m not sure if Cunard is superimposed on White Star, or vice versa. Anyway, another interesting fact about the pier: this is where the RMS Lusitania, the fastest, one of the most luxurious, and second largest liner in the world departed on its final voyage. As you may know, on May 1st 1915, nineteen hundred men, women, and children departed Pier 54 for a voyage that would be implanted in the memory of folks for years to come. On the 7th of May, the Lusitania was torpedoed by a German U-boat, sinking in 18 minutes, and taking 1200 victims down with it (including Alfred Vanderbilt and Charles Frohman). Perhaps the Hudson River Conservancy can be influenced into incorporating the gate into their park, perhaps placing trees and flowers around it, creating a sort of monument for those who died on the Lusitania and Titanic. 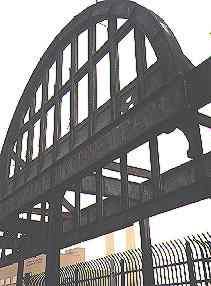 A close look at the (very) faded lettering on the crossbar, just below the arch, reveals the words “White Star” and “Cunard” seemingly superimposed.

This is where the White Star Lines berthed grand passenger ships that sailed the seven seas.

One of the spectacular ocean liners that used this gate in their heyday would have been the Titanic itself, though he great liner was due to arrive at nearby Pier 58 — if fate had not intervened, It was there that passengers from the doomed vessel debarked after they were picked up in the icy North Atlantic Ocean by the Carpathia, operated by Cunard.

The White Star Lines weren’t sunk by the Titanic disaster, but U-boat submarine warfare during World War I didn’t help. White Star fared well in the 1920s but then the Depression came; White Star Lines merged with the Cunard Lines in the 30s. Cunard itself was bought by Carnival Cruise Lines in 1998.

The entire [Pier 54] structure — a big, three-story-high shed, essentially, like a train station on water with waiting rooms, luggage holds, etc. — was considerably damaged by fire sometime in the 1930s, and rebuilt to the same kind of design, although the concrete facade that lined the West Side highway and surrounded the remaining gate went from a extravagantly frilled Edwardian-type design to a more streamlined art-deco look, which remained until the building was demolished in 1991. After ships stopped going there, the lower level of the pier was used (informally) as a parking lot. It sounds like it would’ve been awesome for urban exploration if it were still there. 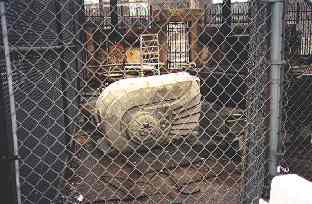 This is one of the few remnants of the West Side (Miller) Highway, which ran above 12th Avenue until it became too deteriorated to remain standing in December 1973.

The city tore down the el structure from 1974-78. This wing-shaped concrete slab is one of the last remnants of the structure.

There was a location device that newspaper reporters used. Take the Pier number and subtract 42 and that was the cross street where one would find that Pier. So Pier 54 would have been at the foot of West 12th Street. This may have been an approximate tool. My dad worked for “The Tellly” (World Telegram) for 24 years.

What’s Going down i am new to this, I stumbled upon this I have found It absolutely helpful and it has aided me out loads.
I am hoping to contribute & help different customers like its helped me.
Good job.

Great post. I was checking continuously this blog and I am impressed!

Very helpful information specially the last part 🙂 I care for such
information a lot. I was looking for this particular info for a very long time.
Thank you and good luck.

” He gives the illustration of Scandinavian international locations, exactly where officials “will be thrown from workplace for what is going to be considered extremely minimum abuses.
Local Game – Stop locations in the San Diego area are listed below.
Back when you opened that first game of a brand new horror game, and the next day you had
to buy another pair of pants and undergarments (depending on which brand you like).

The historical arch should be preserved. In addition, the CUNARD WHITE STAR lettering should be recreated in the font of the shipping’s heyday. The arch would be a great incorporated into the Hudson River Park. Plus, with trees and flowers, it would be a beautiful memorial monument to the crews and passengers who perished in the RMS Titanic and RMS Lusitania tragedies.

My dad worked in Pier 54 in the early 60’s. We used (mom, my four brothers & me) to go to the pier every Friday to meet my father & have dinner with him. Then he would buy each of us a little trinket to make us happy, i still have one. Those are wonderful memories. I am now looking for employee union 74 that my dad was a member. Do you know how i can find this information? I would be a great help. Thank you.