Rattlesnakes? In New York City? Not anymore. The last rattlesnakes in the Bronx, their last stronghold, died off around the turn of the last century because of encroaching civilization as streets were laid out and housing was built. People and rattlesnakes aren’t a good mix; snakes have fangs and people have pitchforks. (Smaller snakes like garter, ribbon and brown snakes can still be found in parks.)

Probably the last haunt of rattlesnakes in New York City was in what is now Seton Falls Park in the Eastchester section in the Bronx. 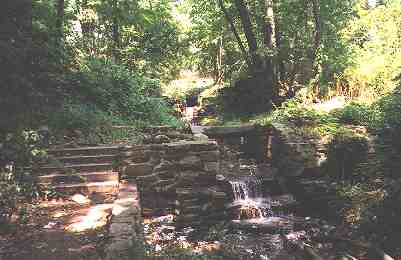 Rattlesnake Brook trickles through Seton Falls Park. When early settlers of what is now the Eastchester section of the Bronx first strived there, they found all manner of wildlife, including some dangerous animals such as rattlesnakes, bears, wolves and wildcats.

According to Bronx historian John McNamara, the original families of Eastchester signed a pact devoted to the destruction of the rattlesnake, and hit upon an unusual method to carry this out. They would set their pigs on them.

Pigs find snakes of all types a delicacy, and their thick hide and layers of fat make them largely immune to snakebite.

By 1900 most if not all rattlesnakes were absent from the area, but it wouldn’t be long before the pigs would be too. The stream that meandered through the area is still called Rattlesnake Brook. 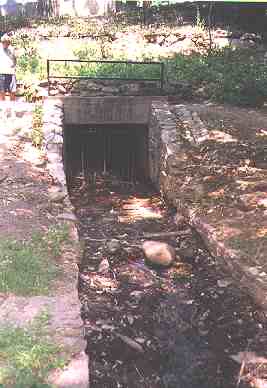 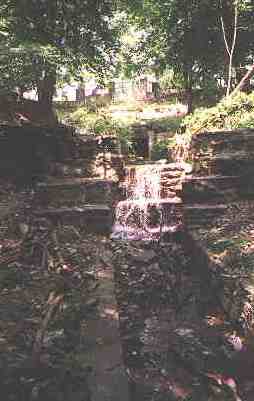 Bronx resident Donald Gilligan, whose photographs of Rattlesnake Brook appear on this page, has this information on the ancient stream:

All that remains of Rattlesnake Brook lies, encased in a masonry trough, within the bounds of Seton Falls Park. The trough is not always visible because it is choked with sediment and overgrown by water-tolerant vegetation such as phragmites. The last vestige of the stream is a slough in the southeast corner of the park, near the intersection of Pratt Avenue and Marolla Place. 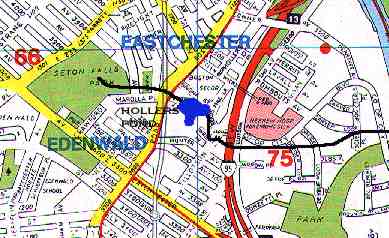 On this map, I have drawn the approximate route of the old Rattlesnake Brook in the northeast Bronx. The blue blotch is the old Hollers Pond, which was replaced by the Boston-Secor Housing project.

Hollers Pond was an affair of about (I would guess) four acres, shaped like a rather blocky “T”. Picture a shape constructed of four equal sized squares arranged in the shape of the letter “T”. The pond was located where the Boston-Secor Houses now stand. The crossarm of the “T” ran east-west and the vertical bar projected from the south side of the crossarm at the midpoint.

At the southeast corner of the crossarm, there was a dam with a wooden sluice gate which, along with the generally leaky dam itself, leaked enough water to sustain the flow of the stream. Below the dam, the brook flowed in a natural state, through its valley, roughly parallel to the old Reeds Mill Lane, to a point beneath I-95 at approximately where Givan Avenue intersects with the I-95 service road. At that point, the brook turned due eastward and flowed into the salt marsh now covered by Co-op City. Eventually, after meandering through the salt marsh, the stream became tributary to The Hutchinson River.

Reminiscences and photographs by Donald Gilligan

Thank you very much Donald for the photos of Rattlesnake brook. I as a boy spent many wonderful hours playing in the park and brook and climing thru the eye of “Dick Tracy” rock. Yours, William

In was alerted to your article by Lenny Bafaro, a childhood friend that I re-connected with through Facebook.

Your article on Rattlesnake Brook brought back memories of living on Pratt Avenue adjoining the Park.

I certainly remember the cliff called “Dick Tracy Rock” the other writer mentioned. Is it true that was the original “Falls” which dried up when the area North of the park was built up and paved over?

I would be interested in knowing more about Seton Falls Park, and might be able to contribute some information drawing on memories from age five through 14 wandering and observing there.

i too remember climbing on Dick Tracy Rock. in the summer we played baseball on Pirates Field which faced Pratt Ave. across from a home owned by a Mr. Levy. he house was built of stone and had an inground pool that overlooked the Little League Field. the house also had 2 Dobermans that kept us kids away. if you hit a foul ball on the 1st base side of Pirate’s field , you had to go down the hill and find the ball next to the creek mentioned above. if you were lucky , you found it right away and escaped with only about 100 mosquito bites. Pirate’s Field was named after the Nativity Pirates, my dad and uncles played for them in the late 30s. in the winter you could sleigh ride from Tracy’s rock all the way past the water fountain and down a steep but short hill and jump over the stream! ( if you were lucky). we hung out on the big rock on 233rd St. and Seton Ave, and at one time in the early 60s painted the rock bright yellow. the falls that were near Murdock Ave. was owned by Mr. Seton who also owned the area of the park including where the Edenwald projects are now. His daughter drowned in the falls, so he had them filled in and gave the land to the city. His son married a young lady named Elizabeth. she was widowed at a young age and raised her children by herself. after they were on their own, Elizabeth moved to Baltimore and turned her life over to God, founding a convent and doing work with children. she later became Saint Elizabeth Seton, the 1st Saint born in the U.S.A

Hello! My name is Maureen and i lived in the house on 3660 Pratt Ave. My mom and dad bought the house in the 50s or 60s. The house burned down in the 70s. I was wondering if you might have pictures of the house and park from the early 70s. I have only my memories but nothing else. If you can let me know I would greatly appreciate it.

i have some old photos of the park, if i can find them, i’ll post them

i also remember skating on Holler’s pond with my double bladed skates when i was 4 0r 5 years old. a very funny story, which i told at my older brother’s funeral concerned Holler’s pond. i remember the old ice house next to it. someday i’ll tell the story

I have shot several photos of Seton Falls Park, including Dick Tracy Rock fairly recently…I’d be glad to share with the group..All I ask is for the photo credit…Cheers, Rick Secor Ave. 1957-1987

Rick, yes, any pictures you have would be great. I lived at 3708 Secor

Lived on Eden Terrace across the ball field

I grew up in the area of Pratt and Dyre Avenues and remember Pirates Field as the place where kids would fly remote control airplanes. My mother used to chauffeur my sister to Hollers Pond for skating as one of her friends lived in a home opposite the pond. I vaguely remember the ice house and a small rickety bridge that we crossed to access that neighborhood from Boston Post Road. Also in that vicinity was the nursery/garden center that my mother patronized. It was owned by Emanuel Shemin and eventually moved to Greenwich, Connecticut, where it flourished into a major landscape industry wholesaler. If anyone who lived in that area has photos of Hollers Pond it would be great to view them!

I grew up in the vicinity of Pratt and Dyre Avenue(s) in the 1950s-60s and recall how neighborhood kids would fly remote control airplanes in Pirates Field. There were no row houses along Pratt Ave as now, and I recall how the stream flowed out of Seton Falls Park beneath Pratt and across to Boston Post Road, beyond which was the pond and ice house. My sister had a friend who lived near the pond and we would drive into that neighborhood on the rutted surface of Reeds Mill Lane to reach the house–skaters would use the pond in winter and if I am not mistaken, there was a rickety wooden bridge you could cross, probably on Hollers Avenue or Reeds Mill Lane. Adjacent to the pond was the nursery and landscaping business of Emanuel Shemin, who eventually moved to Connecticut and became one of the largest wholesalers in the landscape industry. I would love to see photos of the neighborhood from that time if anyone can share.

I was born. And grew up on Edenterrace now Morrella place.played ball there,was only two houses on the block when I lived there. My father was a bee Kepper,we had goats chickens,
I went to P.S 68 lived there from 1938 to 1962 my father built the house in 1933
It was a great life

I attended JHS 142 (now closed) which is next door to the park during the late 1980s. The park has had major improvements since that time, however, it still remains a bit shady at times. A man targeting young boys entering the park was arrested in the fall of 2015 and the body of a Mount Vernon woman was dumped in the park by her boyfriend in the summer of 2016.

There also has been this urban folklore of a inhabitant of the park called Mr. Wiggly.

Donald — I was a friend of your brother Tim and Ellen. I lived on Boller Av. I wonder if you can contact me. Jerry Heydt heydt@asu.edu Scottsdale, AZ

The Cave was filled in when 233rd was paved I have photos of the cave, but I do not know how to upload it to this web page

Peter Cascone, I remember you. You lived opposite Whale Rock. Lenny Bafaro was my cousin. I lived around the corner on Harper Ave. The last time I saw you we were all kids playing on Whale Rock. I broke my right arm on the swing we had rigged on the side of the rock.

P.S. Talking about rattlesnakes, I also used to play in the marshes across I-95. I remember there being copperheads in that area. The House of Triumph had a motorcycle track in those woods. That’s where I learned to ride.