Once upon a time, trolleys clang-clanged their way through the streets of Brooklyn, Manhattan, the Bronx and even parts of Queens and Staten Island. Trolleys ruled to the degree that the thin peninsula of Coney Island could boast not one but two east-west trolley routes! One of them ran down Surf Avenue from West 37th Street east till it joined up with the trolley that ran on Gravesend (McDonald) Avenue.

The other, known as the Nortons Point line, ran in a right of way between Surf and Mermaid Avenues from a terminal at the Stillwell Avenue elevated complex west into the private community of Sea Gate. Two trolley lines on virtually the same route, though, finally proved redundant and service ended in December 1948. For a few years, the old right of way was kept open as a street named Railroad Avenue, but this too was soon closed and for the last forty years the old route has been made nearly invisible by new construction. But… if you know where to look, a trace or two of the Nortons Point line is still there! 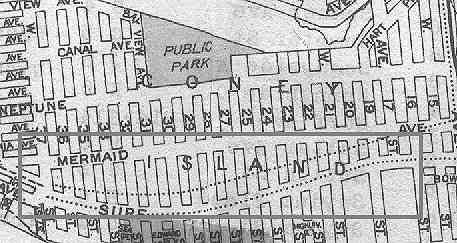 This 1938 Geographia map shows Coney Island with the Nortons Point line visible as a dotted line between Mermaid and Surf Avenues. 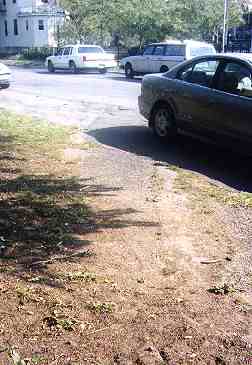 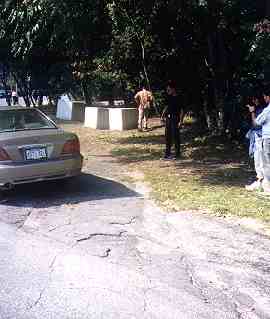 Grooves in the paved roadbed at Oceanic and Surf Avenues reveal the path of the Nortons Point trolley line. 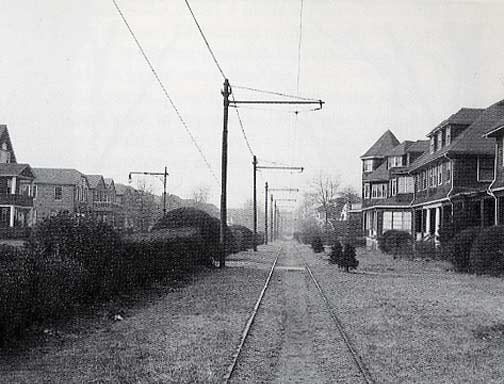 The Nortons Point line runs through Sea Gate in the 1930s. 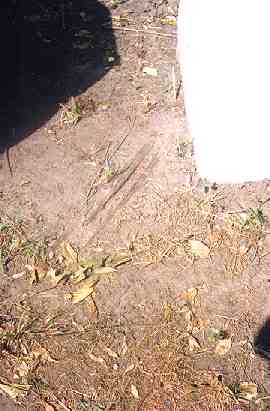 This is one of the wooden railroad ties left over from the Nortons Point Trolley. 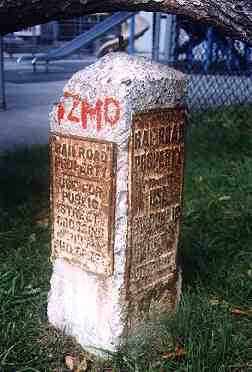 Need further proof that a trolley once ran here? This marker is just inside the gate. It reads:

I honestly don’t know what function this marker actually had, but it’s ‘railroad property’–so the trolley ran right here.

I first shot this page in September 1999 — I haven’t been in Sea Gate since, and I’d like to know what became of these artifacts!

DOWNTOWN WALL MURALS. The art of the wall mural in midtown.

Although I was only 5 when the Norton’s Point trolley was discontinued, I still remember riding it to my Grandfather’s. We would ride what was then called the West End subway line from Bay Parkway to Stillwell Avenue where we would get the trolley waiting on the ramp. We’d ride it to W.31st where Granpa lived. I’ve lived in Houston, Texas since 1952, but it was nice to bring back memories when I saw this on the internet.

I worked at the Coney Island Post Office, at that time under the Steeplechase roller coaster, in 1945. I remember it well.

The fare was 3 cents, or two for a nickel. It ended atthe Sea Gate entrance, thought here was a single trank that went to Norton;s Point, what a view. As a substitute I had the Sea Gate route once in a while. I never saw action on the single track withing the gate, the catenary was down by then.

There was an outdoor var barn just inside Sea Gate where excess cars were stored.

A small 1933 vintage bus extened the routr inside Sea Gate.

The trolley line was owne by The bSouth Brooklyn Railway Company, which still esxists somewhat, under the aegis of the MTA.

The RR marker is still just inside the fence at Sea Gate.

Do you have a recent photo?

A few of the trolley poles are still standing inside Seagate being used for Stop sign poles.

My fathers Cousins,the Gargiulo’s were Fruit and Produce purveyors who had a store on W22nd St between Surf & Railroad Avenues.Wonder if anyone out there remembers?

One of my earliest memories is riding on the rusty Railroad Avenue trolley (also called the Toonerville trolley) to the elevated station at Stillwell Avenue and boarding a subway train there (Likely the Sea Beach Express).

I gather that the ROW was open for a time as “Railroad Avenue” after the line’s closure.

The remainder of the tracks ran behind our house on Manhattan Avenue at the end of Laurel Avenue.
Susan Seigal Prezant and I used to play there all the time. Actually the metal tracks were completely gone. What was left was the track bed and the wooden cross bars. It always felt like it was a private world that we had to ourselves.

I remembeer traveling on the Norton’s Point trolley. Towards evening, when it was harder to see outside, some kids used to hitch rides on the trolley. It was awesome to me, to witness such bravery.

After moving from Scovilles Walk between W.25St & W.27 St I lived on W.27 St And RR Ave. I took the NPt line to PS80. Sometimes to save a few pennies I would hitch a ride on the rear of the car or on the side door and pray that the car would stop on my street. It usually did. Those were great times.