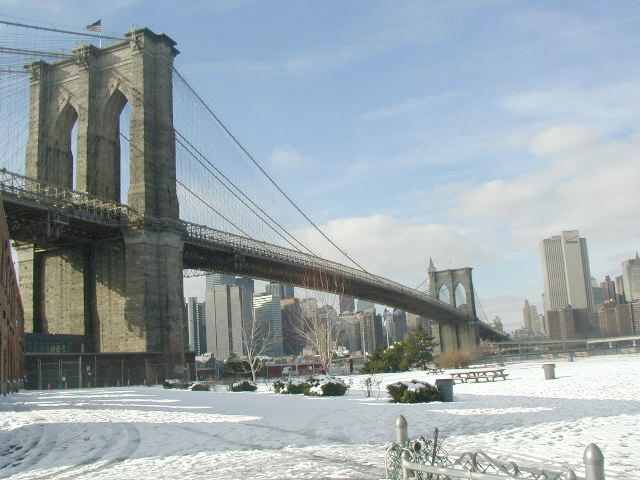 In Disneyland, Dumbo* means a flying elephant, but in Brooklyn, a new acronym was coined in the 1980s to refer to the mostly industrial area located beneath the Manhattan Bridge: “Down Under the Manhattan Bridge Overpass.” It’s rather awkward but gets the job done.

Recently, Dumbo has been invaded by Manhattanites seeking living space; old lofts are being renovated and converted to residential use, the buildings are being spiffed up, new parks, delis, and banks are appearing. Williamsburg was similarly invaded by the Lower east Side cognoscenti a decade ago, and while the area may be hipper, it’s certainly a lot more expensive to live in. Time will tell if this happens to Dumbo.

Dumbo features spectacular views of two bridges, and it has some secrets the yuppies may not know about yet.

*Newspapers generally spell Dumbo in ALL CAPS but we will do it cap/lower case on this page. 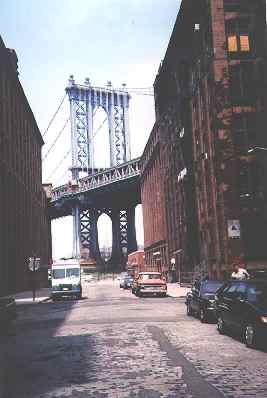 The south tower of the Manhattan Bridge makes a spectacular appearance looking north on Washington Street. It’s indistinct here, but the Empire State Building can be viewed directly between the legs of the tower. 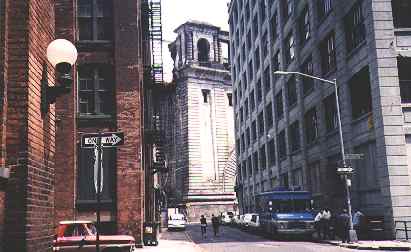 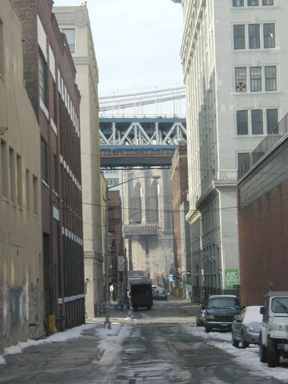 In Dumbo, bridges make spectacular appearances when you round a corner or look down a street. (RIGHT) On Plymouth Street, the south tower of the Brooklyn Bridge can be spied underneath the double decked Manhattan Bridge. 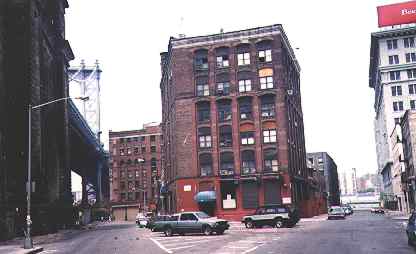 The construction of the Manhattan Bridge in the early 1900s caused the street grid to be interrupted and forced buildings to be built in unusual shapes. Here Anchorage Place angles northwest along with the bridge while Pearl Street continues north. 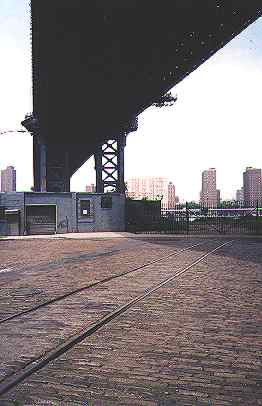 Dumbo is laced with what, on first glace, appear to be old trolley tracks. The tracks are in fact the remains of the Jay Street Connecting Railroad, in which goods were transported between buildings along the waterfront. The JSCR is no longer in use. 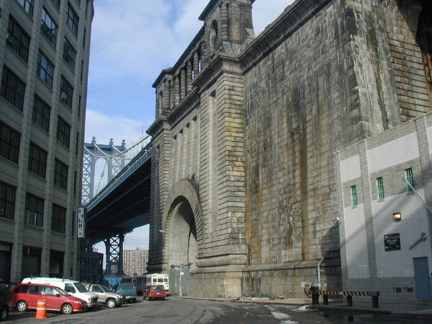 Adams Street is forced into a northwestern jog as the massive Manhattan Bridge anchorage stands in its way. Plymouth Street runs under the arch. 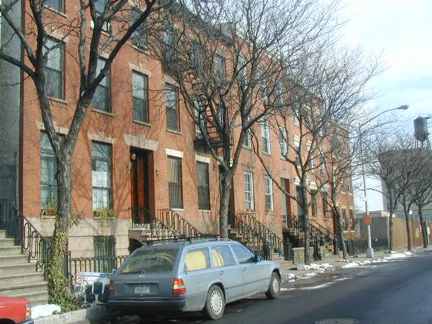 East of Dumbo, centered along Front, Gold, Water Streets and Hudson Avenue, are the remains of a small residential neighborhood called Vinegar Hill. These Front Street brownstones are the exception, not the rule, in this small enclave dominated by warehouses and the massive Con Edison plant along the East River. 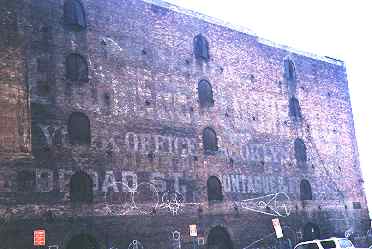 At the water’s edge at Plymouth and Main Streets, a palimpsest of ancient advertising appears on an 1880s-era warehouse wall, along with cryptic drawings probably added much later. The windows were likely added after the lettering had been drawn. 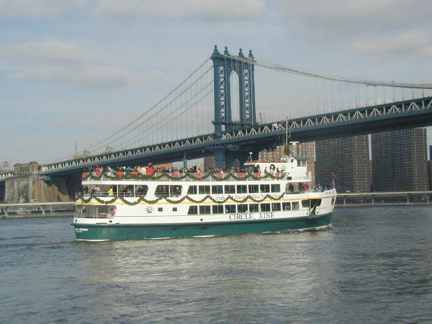 The popular Circle Line, decorated for the season, running no matter how cold it may be, passes under the Manhattan Bridge in this view from Fulton Ferry Empire State Park.

The park, seemingly perpetually under construction, is a little-known state park running along the East River waterfront between the bridges. There are grand dreams and schemes to extend the park west and south along the East River as far as Atlantic Avenue, but so far, these are glimmers in the eyes of developers. 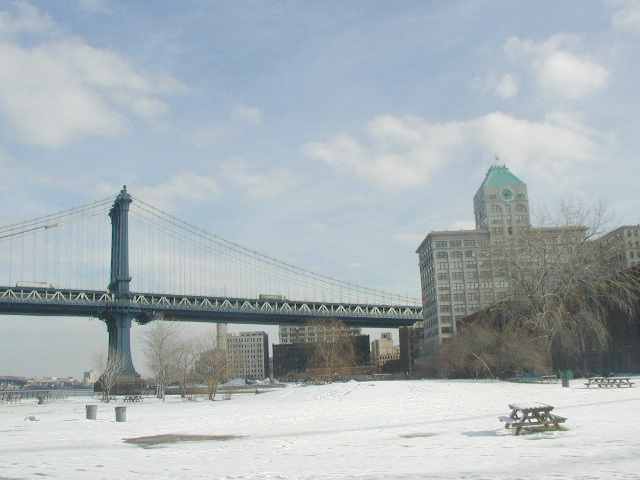 In this view from Fulton Ferry Empire State Park, the Manhattan Bridge is seen with the massive 1888 Gair Building (now known as the Clock Tower Building). Industrialist Robert Gair had vast holdings in the area in the 1880s; his main claim to fame is as the inventor of the corrugated cardboard box. 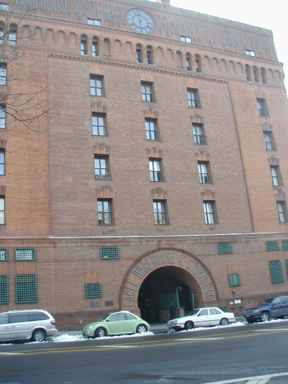 The Eagle Warehouse, 28 Old Fulton Street, was built by architect Frank Freeman in 1893 on the site of the old Brooklyn Eagle building. For 114 years the Eagle was Brooklyn’s hometown paper. On this site on Fulton Street from 1846 to 1848, Walt Whitman edited the Eagle; he was forced out when his antislavery views and support of the Free Soil party clashed with the paper’s management. Whitman went on to edit the New Orleans Crescent, but spent most of his career on Long Island. 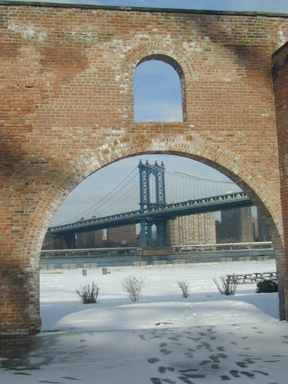 There has been some success in converting part of the old warehouse and industrial buildings for recreational use. This hollowed-out brick building was the Tobacco Inspection Warehouse and dates to 1860. Next door are the old 1880s Empire Stores buildings, which may be condo’ed or used for a museum. 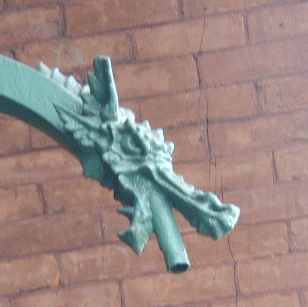 Romanesque Revival details characterize the Eagle Warehouse, including the dragon-shaped detail from the front gate. 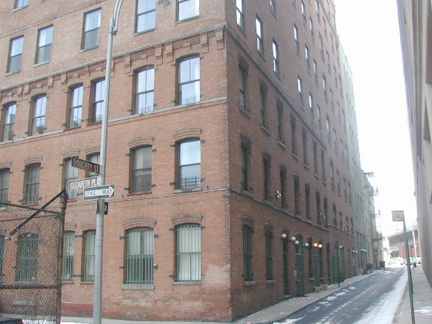 While designing the new Eagle Warehouse, Freeman decided to leave intact the old three-story Brooklyn Eagle pressroom at Doughty Street and Elizabeth Place. It can be detected easily by its old cornice. Perhaps Whitman himself worked in this building. In any case, he is remembered by a plaque near the building entrance on Old Fulton Street. 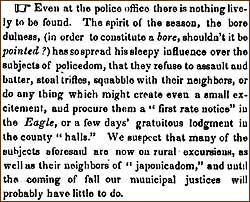 In this 1847 Eagle editorial, Whitman complains that there is little crime, so Brooklyn Eagle reporters have little to do! 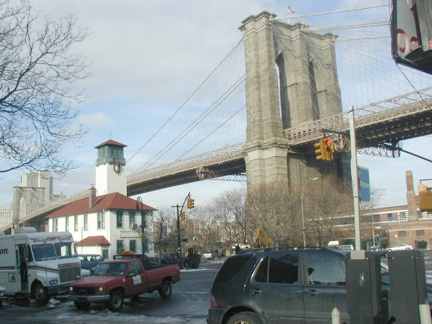 For many years I mistook the small building with the tower at the foot of Old Fulton Street for the old Fulton Ferry terminal building. The ferry, which had run for over 100 years, made its last run from here in 1924, though in recent decades, service has begun to fitfully return. The building is actually a fireboat station built in 1926. The tower gave the station enough room to dry fire hoses. 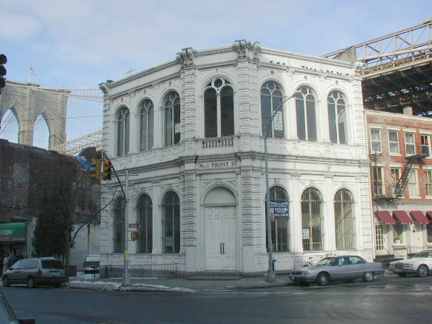 One of Brooklyn’s more impressive cast-iron building facades is the Long Island Safe Deposit Company building, at #1 Front Street at Old Fulton, which dates to 1868. The construction of the Brooklyn Bridge made life difficult for businesses on lower Fulton Street, and the bank was no exception; it closed in 1891. The building is presently empty but is being renovated. 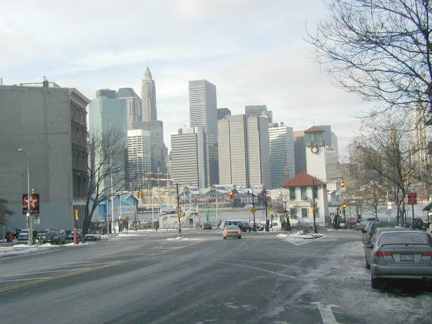 The view of the foot of Old Fulton Street seems incomplete without the World Trade Center, so here’s a 1999 view of the towers from Dumbo.

My family came from Norway and Germany and this was their point of entry. My G.G. Grandfather was a Lighterman at the docks while his father in law was a baker on Bridge street. Front,Talman,Charles,Bridge,Mercein,prospect, York, Canton…were all streets on which they lived. What I would give to see detailed photographs from the mid 1800’s of those places.

If ever there is an old photo of 83 Bridge where my g.g.g. Grandfather was a Baker, please let me know.