There was a time, not so long ago, when you could enter an eight-foot tall booth, some wooden, some made of aluminum, and shut out the noise, confusion and chaos of the city while you made a phone call. And, you didn’t have to bother the people sitting or standing near you with your loud yapping. Convenience trumps civility every time, and everywhere has been noisier by a large quantum beginning in the 1990s when the mobile phone revolution took place.

They called them “phone booths.” The telephone company even provided phone books for you. A dime got you about five minutes, and if you needed more time…well, you only needed another dime. 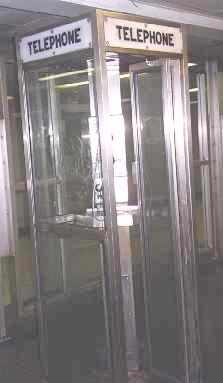 In 2002, there was a remaining booth in the IND subway stop at 6th Avenue and 57th Street

When did we first notice that phone booths were inexorably shrinking, and increasingly replaced by ever smaller mounted public telephones? Could it have been that scene in the first Christopher Reeve Superman movie in 1978? Lois Lane was in a helicopter accident and was dangling 30 floors above Metropolis. Clark Kent knew what to do…he had to become Superman, and fast. He headed immediately for a phone booth. He could only find one of those miniature hooded phones, and looked around for another option. 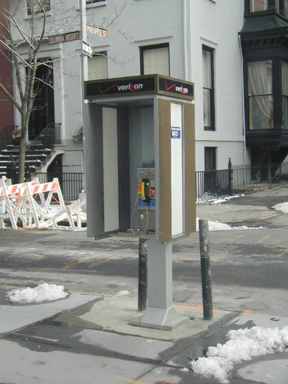 This is now pretty much the standard-issue NYC phone “booth”. It offers rather perfunctory protection from the elements, and its side panels can be used for advertising. Its “hood” actually is somewhat more roomy that models from the 1980s, which offered protection only for the telephone handset and cradle. 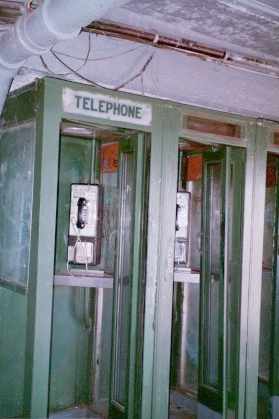 A bank of booths in a midtown basement. This photo was sent to me quite awhile ago, so if anyone can identify the location, drop me a line.

Phone booths probably met their Waterloo because of events beginning in the 1980s. Drug transactions took place in phone booths; the homeless took up residence in them; and increasing use of wireless portable phones in the mid-1990s made roomy booths an increasing anachronism.

Will we be seeing a day soon when public telephones will be eliminated, with commercial interests assuming the proliferance of cellular phones has rendered them completely unnecessary? Your webmaster hopes not.

The days when a person wishing to make a call would go into a booth, close the door and have whatever he or she was saying, in whatever volume, blessedly isolated from others are as over as, well, the dime public phone call. And it’s a shame. 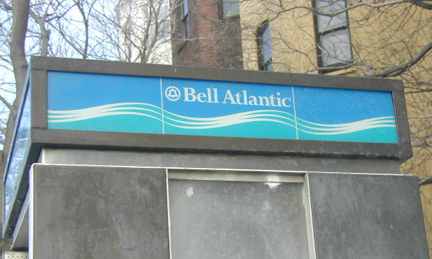 When I first started handing over my hard-earned to pay for telephone service, I simply made out checks to New York Telephone. Simple, huh? But then began a parade of names that would earn you a lot of points in Scrabble. First came Nynex, then Bell Atlantic (which boasted a nice blue-green logo) and lately, Verizon. Phone company names have a shelf life of about three years; then comes another takeover, and the million-dollar poobah at the top dreams up another goofy name. 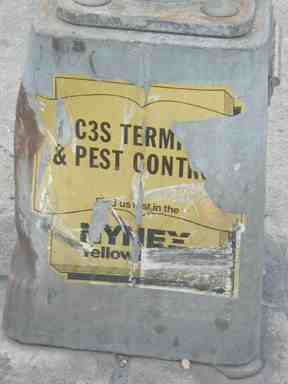 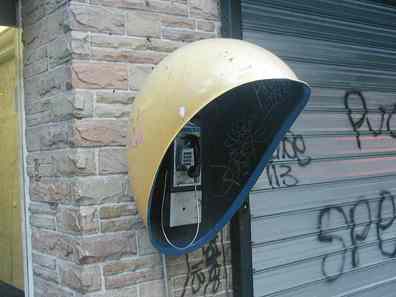 In the Swingin’ Sixties, some hep, happenin’ phone shelter designs started to appear, like this pod-shaped item on East 46th Street between 5th and Madison. A similar model had been mounted for years at Clark Street and Columbia Heights in Brooklyn, but it was recently taken down. 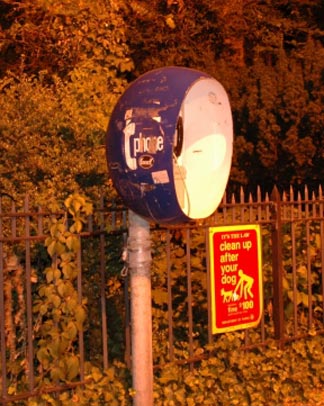 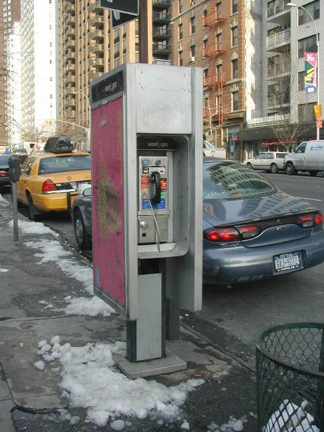 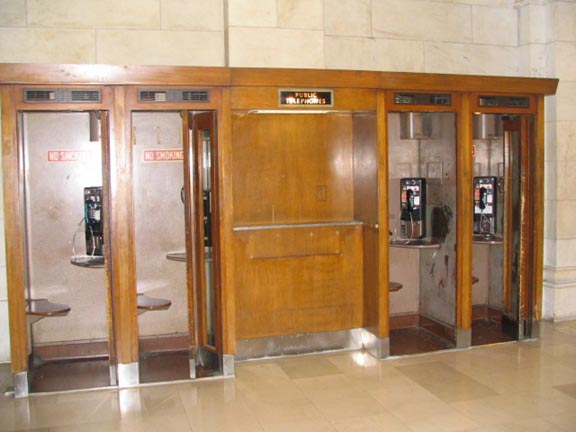 Private wood booths like this can still be found in bars around town. 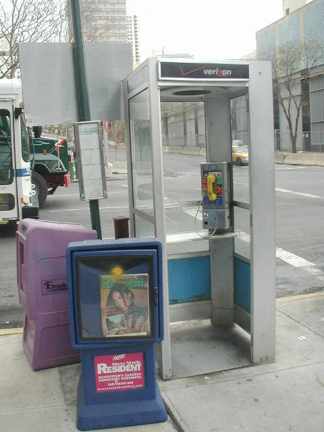 Some full-size phone booths are still around, like this one on West End Avenue and West 65th Street. It’s missing the one item that would make it completely indispensable, though…a door.

I dig telephone innovations like the death of rotary phones, which were really rough on the fingers. Touch tone, introduced in 1963, is the cat’s meow. I also don’t yearn for the days of party lines or having the operator put through every private call. But the demise of the private phone booth is a shameful thing: detrimental to societal comity.

I rarely talk out loud on a cellphone unless I have to. I go where I won’t bother anyone. I wish everyone would extend that courtesy.

HITCH A RIDE TO ROCKAWAY BEACH to see the alleys

I always look for those phone booths in the NYPL – I really hope they survive the proposed alterations/renovations which are under discussion.

For some reason the right side of all of your pages are not there. I can’t read whole sentences. Any ideas?

Some people have that problem, and it resolves itself after awhile; otherwise, try a different browser.

The problem seems to be that I’m using an impossibly old (2 years!) WordPress template — it also refuses to show photos on mobile devices. Will probably have to revamp the whole thing.

[…] over to a spectacular row of green phone booths, similar to design as the one at right (courtesy Forgotten New York).   These green phone booths must have been quickly replaced in the 1970s with the more […]

The last public phone was just removed from Pelham bay

the midtown basement booths are actually at the 79th street boat basin, at ground level, but the space there definitely feels subterranean:
https://www.payphone-project.com/festering-beauties-phone-booths-at-the-79th-street-boat-basin.html

a number of those “pod-shaped” enclosures used to inhabit midtown in the area of Little Brazil, 46th Street btw 5th & 6th. the design of those enclosures echoed that of Brazil’s iconic Orelhão enclosure, arguably the world’s 2nd-most-recognizable payphone enclosure after the UK’s K series. here’s another Orelhão from that stretch of 46th Street in 1999, followed by some contemporary Brazil enclosures:

that last booth was actually at 66th and West End. it was replaced a few years ago with a Canadian model, no rational explanation for this has yet crossed my desk but the CityBridge monopoly is to blame. other booths on West End are at 90th, 100th, and 101st. as far as I know the only other outdoor booths in NYC are on Yankee Pier at Governors Island:

i have different memories about phone booths. i found them claustrophobic, suffocating, and generally disgusting. from the moment i stepped into one of those coffin-like cubicles all i could think of was what i had to do to conduct my business and get out.

the Pierrepont phone is long gone. the NYPL booths remain, though the phones have not worked for about a year. i remember that 66th street advertising accretion. you can still see BellAtlantic and NYNEX logos on NYC payphones, as well as BellSouth and Pacific Bell and almost any regional telco.

guessing Akismet will spam filter this for all the links. 😉

I remember when there was New York telephone and New England telephone back in the 50’s and 60’s before NYNEX merged them both.