YOU NEVER KNOW where you’re going to find inspiration for Forgotten NY pages. One of the interviewees in Gothamist in September 2004 was columnist/novelist Amy Sohn, and she slipped in this remark:

The F [is my favorite subway line]. It was the first train I spent a lot of time on when I moved into my very first post-grad apartment, on Clinton and Luquer. (Luquer used to be called Luqueer but someone homophobic had the signs changed.)

I had never seen Luquer Street spelled any other way than how the DOT spells it these days. Luquer is a short, 4-block street in Carroll Gardens where it begins to melt into Red Hook in Brooklyn. Luquer used to run 5 blocks, but the block between Hicks and Henry was eliminated by the construction of the Brooklyn-Queens Expressway in the early 1950s.

Luquer, despite its spelling, has always been pronounced “lu-QUEER” with the emphasis on the final syllable, and a long “e” as if there were two there. (That was borne out by my conversations with Luquer Street residents when I did the photography for this page). So, what gives? Why the strange pronunciation? Perhaps a look back in the old maps and street guides might help.

This 1866 Johnson’s Map adds the extra ‘e’, which makes sense given the pronunciation. This is the oldest map I was able to consult. 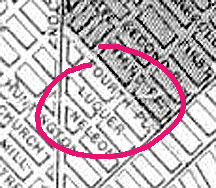 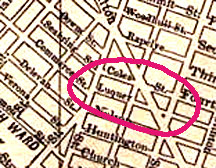 In 1891, Rand McNally agreed with the Eagle. 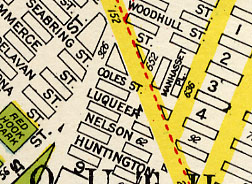 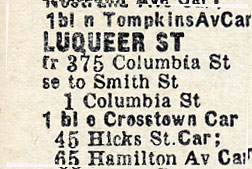 From 1938, in both its maps and guides, Geographia stuck with Luqueer, and was consistent with it into the 1970s. 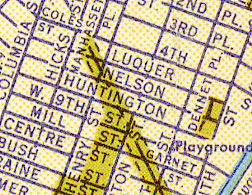 In 1942, Rand McNally was sticking with one ‘e’. (They have Dennet Place with 2 T’s, but that street name has also been in spelling flux over the years.) 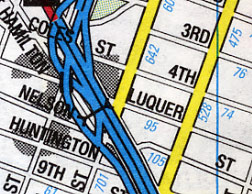 In 2000, Hagstrom was pushing ‘Luquer’ to match the DOT street signs.

Actually the proper spelling is LUQUEER.

Nearly all of the Twelfth ward, except the Jacob BERGEN estate, belonged to the VAN DYKES and LUQUEER families. The older LUQUEER, Abraham, died in 1823, and his son, Nicholas, in 1864. The BERGEN estate, by the way, took up a good portion of the Twelfth ward and half of the Tenth ward, between Gowanus bay and Clinton street and Butler and Hoyt Streets. Mr. BERGEN, who died in 1847, sold one large piece to Jordan COLES, the balance of his estate being spilt up among heirs. 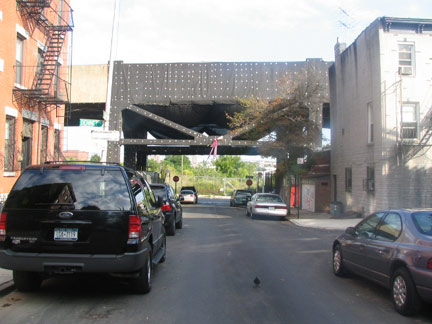 Actually, Luquer Street, despite its short length, has a varied and interesting urban topography. In the above photo we are looking toward its intersection with tiny Dennet Place and in the distance, its run under the elevated IND trestle serving the F and G lines, swathed in protective canvas as it crumbles. 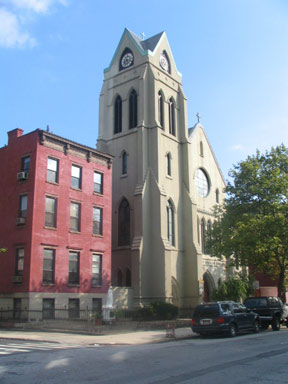 At right is St. Mary Star of the Sea Church, at Court and Luquer, designed in 1870 by Patrick Keely. Other NYC parishes use a latin translation, Stella Maris. 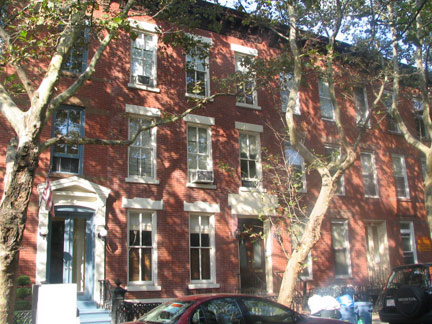 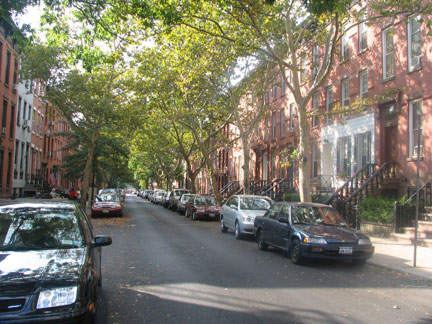 Between Court and Clinton, Luquer Street is a pleasant tree lined brownstone bastion. 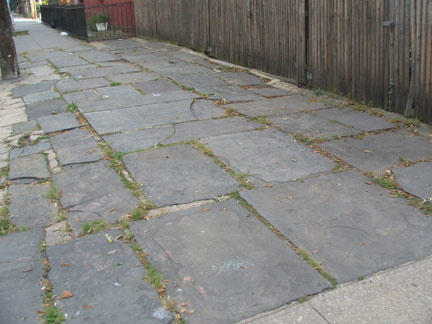 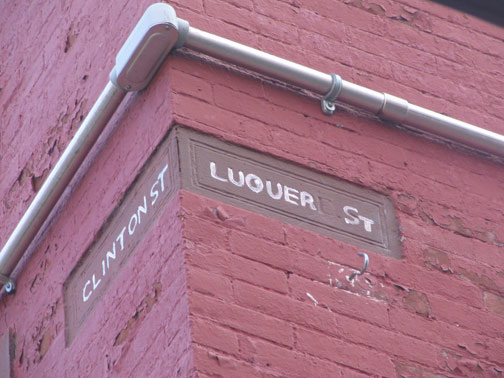 The spelling controversy isn’t quite over. I found this stenciled sign on the southwest corner at Clinton, in which the street names are hastily written over in white. If you look closely…there’s an ‘e’ chiseled in after the ‘r’; looks like this sign had “Luquere.” Now, you got me there…

So what’s the story, Jerry? Well, the mapmakers have never quite agreed. The locals have it right: the pronunciation fits the old spelling, not the new. Though Amy believes homophobia is to blame for the one ‘e’ spelling, I think it was changed because of “queer”‘s old meaning: negatively unusual, or strange.

Your webmaster did photography and scanning for this page September 12, 2004 and completed it September 13, 2004

Great article! Great research on the mystery of the spelling of Luquer St.
I grew up on Luquer St. on the Red Hook side. It is just one block between Columbia & Hicks St.
My mother & grandmother lived there for over sixty years. We all called it Luqueer St. and spelled it that way (for school records, etc.). One day, when we were older kids, we noticed the sign read Luquer with one E. We began to question our parents as to the real pronunciation. They insisted it was with the double e sound and that was that. But as an adult, I used the proper spelling from our street sign. The pronunciation does change with the one E (making it sound more like the French name it is supposedly derived from – Lu-ker), but as a native Red Hooker, one can’t help but say Luqueer no matter how it’s spelled. There is mention that the.name is derived from the actual French named family, L’Escuyer. So, it could just be the Americanization of the name – a bad habit – that ultimately gave it the bad rap it’s gotten through the years. I would love it if there could also be a picture of Luquer St. on the Red Hook side, the forgotten street.

I have a bunch of Red Hook days memories and foto s I remember the Oasis of peach and plum trees abundant varieties of eggplant, lettuce, squash, melons, tomatoes, herbs & spices with Huge sunflowers and Marigold smiling up at all of the families who could see from there windows . My Daddy & Frank created in one backyard peace and tranquility that contradicted the growing demise of happiness for families as the 80’s Crippled innocence with Crack and crime. No matter what happened outdoors we were always safe within those walls my father built with his bare hands. But that lush patch of Luquer ( I thought it was French too) tops ANY garden I’ve ever seen in any of the Boroughs , including the mostly one and two family homes of Staten Island .

Hi Mary Ann….my name is Irene Lattarulo I was named after my grandmother Irene Mari at 42 Luqueer Street. My parents were Anna (Mari) and Peter Lattarulo…..I lived at 32 Luqueer Street which was owned by Tony and Ann Mari who you mentioned in your wonderful article. My mother’s brothers were JuJu, Johnny, Anthony and Michael…..and Johnny Boy is my cousin. By any chance did you live on the Luqueer Street near the address I just mentioned and was your mothers name Flo.

Hi My name is Mariaelena Francesca Bruno. My grandparents were Francesca &Joseph Bruno who owned a house on Luqueer St. I was baptized at St. Marys Star of the Sea. I spent a lot of time there with wonderful memories. I remember the bakery around the corner. What I would give for a loaf of their sesame bread.

My great grandfather bought a house at 36 Luquer/Luqueer Street (empty lot now) in the 1880s and raised his family there. The last one to live in the house (I believe) was in 1936.

My sister’s family lives on Luquer Road in Port Washington, NY. Everyone on that street pronounces it Luqueer as well! I always wondered about that. Thanks for the history lesson.

The plot thickens! Here’s a link to an article about Luquer, the guy everything’s named after:
http://lostnewyorkcity.blogspot.com/2008/12/whos-luquer.html

Not just a guy with a street named after him in South Brooklyn, that’s who.

He was a big deal. A rich and pious dude with a lot of moolah who owned much of the 12th Ward. So tells a big gold plaque just inside the door of Cobble Hill’s Christ Church. Nicholas Luquer (1810-1864) donated the land on which the Richard Upjohn church was erected.”

And there’s a picture of the plaque with the name spelled with one E, references other family members with that spelling, etc.

Hmmm… I reckon that the Luquer family spelled their name with one E, but pronounced it like it had two. Maybe phonetic spelling was popular with the people naming the streets back then. 😉

This is so true! I married in to the Luquer Family. My husband’ grandmother which married into the Luquer Family also, has the history of the family. The pronunciation of the last name is Luqueer even though quite a few family members have changed it. She also shared with me that he did have a lot of “moolah”. I am glad I stumbled upon this article.

To Nikki Luquer,
Hi, my name is Mitchel Luquer. My father and grandfather were both Luquer’s, who grew up in Queens and Brooklyn. You said that your husband‘s grandmother has a history in the family. If there is anyway that you could share that with me, it would be Greatly appreciated!
Thanks!

My great grandfather owned a bottle business at 87 Luqueer St in 1921. I have a picture of his stationary

I was raised on Luqueer st. St Mary’s church I went to school
Ann Bruno

Hi Ann, If you father was my Uncle John then you are my cousin. Let me know.

Ann bruno it’s louie conzo please email me at louieconzo@gmail.com would love to here from you

Thank you so much for this wonderful info! My G-Grandparents Daniel and Margaret Daly lived at 140 Luqueer Street in the 1870’s and 80’s, and moved to 177 Luqueer Street by the 1890’s. Daniel’s funeral was at St. Mary’s Star of the Sea Church.

My family lived in the basement of a brownstone home on Luquer street. I was 5 and my brother was 6.
The year was 1944 and we went to Saint Mary’s Star of the Sea for Sunday Mass. My family always called it Luquer Street to young to get into spelling and pronunciation.

Hi My name is Mariaelena Francesca Bruno. My grandparents were Francesca &Joseph Bruno who owned a house on Luqueer St. I was baptized at St. Marys Star of the Sea. I spent a lot of time there with wonderful memories. I remember the bakery around the corner. What I would give for a loaf of their sesame bread.