Tour 20 in April 2005 was host to about fifty Forgotten Fans in the land of your webmaster’s upbringing. Expected showers never appeared. This tour was lengthier than most, since Bay Ridge‘s sights are spread out over about 40 blocks, but that just made the rest and the eats after the tour that much better. Our tour pages are evolving into a showcase for Forgotten Fan photogs whose technique is much more accomplished than your tourmaster’s… 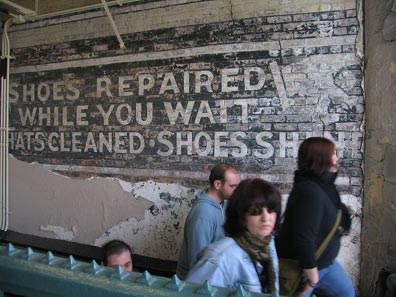 We were fortunate to find a recently uncovered painted wall ad while emerging from the subway station at 95th Street. Photo: Steve Garza 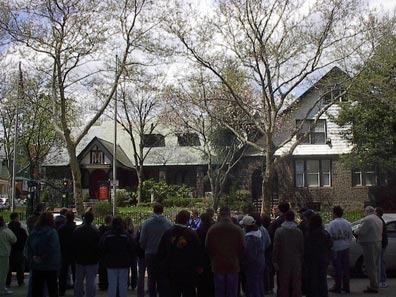 First stop. St. John’s Episcopal Church, where Robert E. Lee and Stonewall Jackson were members of the congregation while stationed at Fort Hamilton in the 1840s. It is the 2nd church building on the site. Photo: Eric Weaver 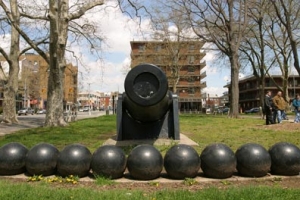 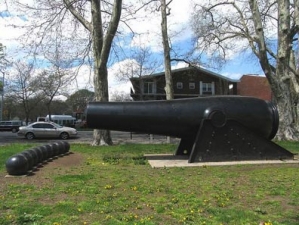 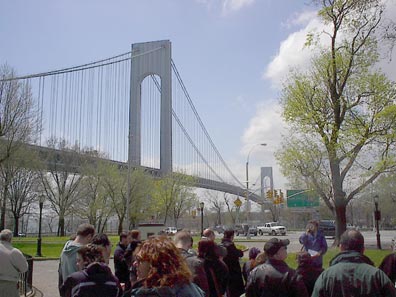 John Paul Jones Park, named for the Revolutionary-era naval hero, is also named Cannonball Park because a massive black 20″ bore Rodman gun, forged in 1864 in Fort Pitt, Pa. meant for Fort Hamilton, was placed in the park after it failed to become a reliable weapon. Cannonballs meant as ordinance have been placed around the cannon (soldered together just in case). Photo left: Eric. 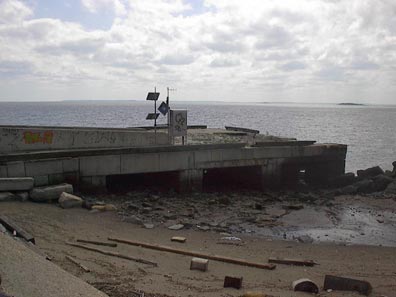 This nondescript concrete jetty on the bike path under the Verrazano Bridge is the last remnant of Denyse Wharf, where the British landed when invading Long Island before winning the Battle of Brooklyn in 1776. The dock was originally the property of local Dutch landowner Denyse Denyse. Photo: Eric 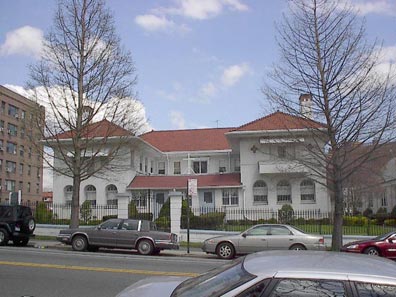 Railroad magnate and noted gourmand “Diamond” Jim Brady purchased this bayside manor at Shore Road and 97th Street for his girlfriend, entertainer Lillian Russell, in the 1890s. It became Fontbonne Hall, a Catholic high school for girls, in 1937. Photo: Eric 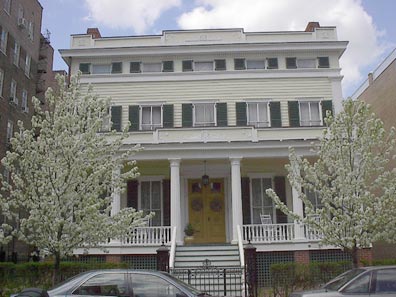 This Greek Revival wood house on 95th Street was built in 1847, making it Bay Ridge’s oldest structure aside from Fort Hamilton. It originally was built facing the shoreline and was moved here after 95th Street was cut through in 1913. It is known as the James Farrell House after its owner from 1890 to 1912, a Tammany Hall politician. James’ son, Jack, was a promoter of Buffalo Bill‘s Wild West show. It has recently been renovated from top to bottom. Photo: Eric Fort Hamilton High School was opened in 1941 on the grounds of the old Crescent Athletic Club. Photo: Colin. 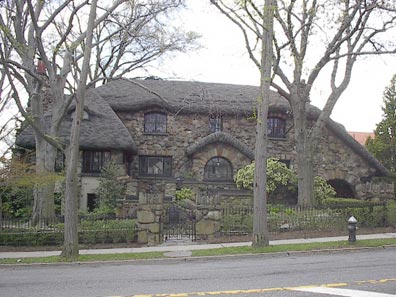 Known to Bay Ridgeites as the “Gingerbread House” this exuberant Arts and Crafts edifice at 83rd Street and Narrows Avenue was built by J. Sarsfield Kennedy in 1917 and originally owned by Howard and Jessie Jones. Photo: Eric 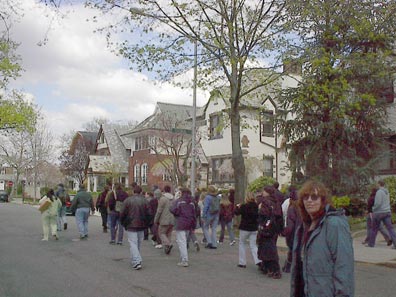 Harbor View Terrace. Bay Ridge boasts many short streets and alleys, some of which are filled with eclectic architecture. Photo: Eric. 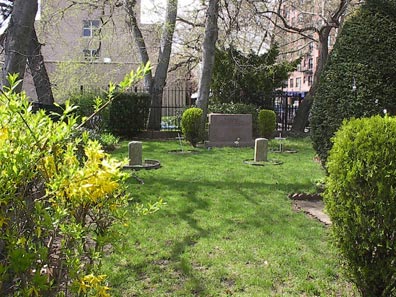 Brooklyn’s smallest cemetery can be found on Narrows Avenue and Mackay Place near Xaverian High School. It is the burial ground of the Dutch Barkaloo family, formerly prominent in the area. A plaque was placed in 1962 naming it “Revolutionary Cemetery” since it’s very possible that Barkaloos served on the American side during the Revolution. As with most small cemeteries, it went through a period of neglect, but it is kept in a good state of repair at present by the Bay Ridge Historical Society. Photo: Eric. 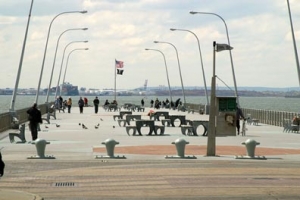 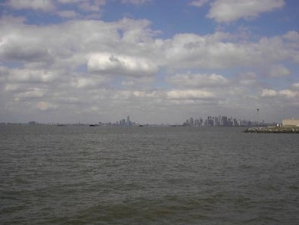 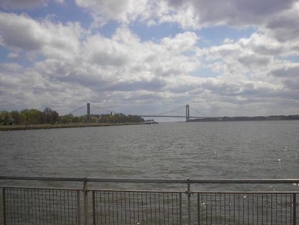 The 69th Street pier, at Shore Road and Bay Ridge Avenue (called 69th Street by most Bay Ridgeites) was the embarkation point for the Bay Ridge-St. George ferry, which closed one day after the Verrazano Bridge opened. The pier has been rebuilt twice since the ferry closed; it commands views of Manhattan, Jersey City, the Statue of Liberty and the Verrazano Bridge. Photo above left: Colin. Photos above right and left: Eric. Reports vary about how Owls Head Park got its name. Some say the promontory where it is located was shaped like an owl’s head. Others say that the estate of State Senator, US Representative, Brooklyn mayor and Brooklyn Eaglefounder Henry Murphy had stone owls’ heads on its gateposts. Industrialist Eliphalet Bliss purchased the estate from Murphy (memorialized by Senator Street) and later willed it to NYC for parkland. Bay Ridge old timers still refer to Owl’s Head Park as Bliss Park. In any case, the park commands an impressive view of the Narrows. Photo: Colin. Flagg Court, Bay Ridge’s pre-eminent apartment building at 73rd Street and Ridge Boulevard, was designed by architect Ernest Flagg and completed in 1936. It was innovative in including reversible fans, exterior window shades (both disappeared) and concrete-slab ceilings. Flagg also built the Singer Tower, demolished in 1967. His mansion can be found on Flagg Place in Todt Hill, Staten Island. Photo: Steve Though Manhattan and the Bronx have many more ‘step streets’ necessitated by steep hills, Bay Ridge has a couple. This is where the “Ridge” comes in. Until 1853, Bay Ridge was known as Yellow Hook, after the color of its sandy soil, but after a yellow fever epidemic local notables got together and came up with a more euphonious name with no nefarious connotations. Photos: Steve (left) Colin (right) Bennett Court, named for a prominent Bay Ridge family, is one of NYC’s few remaining red-brick pavement streets. It is one of two cul-de-sacs on 72nd Street near 4th Avenue. Ovington Avenue bends to avoid a now-vanished pool, which gave developers room to build the two alleys here. Photo: Eric The old Bay Ridge Theatre, on 3rd Avenue and 72nd Street, is now home to a McD’s, an Eckerd drugstore, and the NY Sports and Racquet Club on the third floor. Reportedly, some of the old theatre furnishings are still there in the gym. Hubert Selby, author of “Last Exit to Brooklyn”, grew up across the street. Another theater, the Electra, was at 3rd and Bay Ridge Parkway: the building is now a supermarket. Photo: Colin. A Bay Ridge icon could be the way out. Bay Ridge United Methodist Church, at 4th Avenue and Ovington, with its distinctive sandstone clock tower, has a deteriorating building, necessitating a sidewalk canopy. Thus far, the trustees have not been able to amass enough money or will to repair it. Reportedly, repairs could cost as much as $3 million. The building has been here since 1890. Photo: Colin 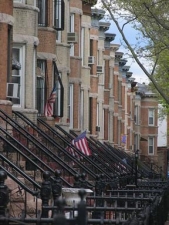 Some of Bay Ridge’s side streets are lined with attached handsome brick buildings, some of whose front yards are lit by working gaslamps. Photo left: Colin, photo right, Steve. 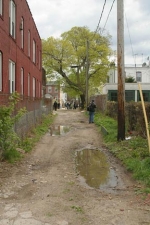 In the 1980s I lived on 73rd Street and considered myself privileged to live near a genuine country lane, Stewart Avenue. It is one of Bay Ridge’s original roads before its present street grid was built. A few old houses along its route have saved it. It has not seen paving for decades, has no illumination from the DOT, and is carpeted with green seed casings in spring. Photos: Colin. Bay Ridge has two main shopping streets, 3rd and 5th Avenues, with 3rd the slightly funkier of the two. On 5th we found a vintage Mustang and Hinsch’s ice cream parlor, its exterior looking exactly the same as it did when your webmaster frequented it after shopping sprees with his mother in the 1960’s; the interior has been filled with very small booths since then. Photos: Steve
Bay RidgeBrooklyn
0 comment
FacebookTwitterPinterestLinkedinEmail
previous post