As with many courthouses around the city , in use or abandoned, many former precincts are still standing. The buildings shown below were built to be very durable. Most were built in the late 1800s. Most of them date to horse and buggy days, since a few still have the horse stables next to them. Unlike today’s utilitarian precincts they were built with many distinctive architectural features. They were built with stained glass, terra cotta, ironwork and even brownstone.

Even though they are former precincts, many have been recycled for other uses – from a super luxury apartment building to offices for community groups. One was even made into a church. Hopefully there will be uses for the abandoned ones! Stable house in rear of the 87th; hoist, not readily visible, is directly above upper door to facilitate lifting of hay for storage. 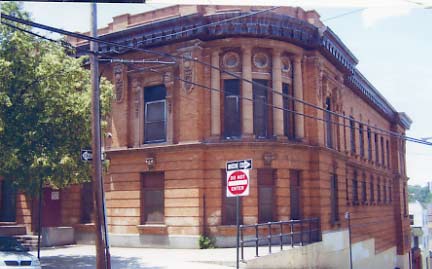 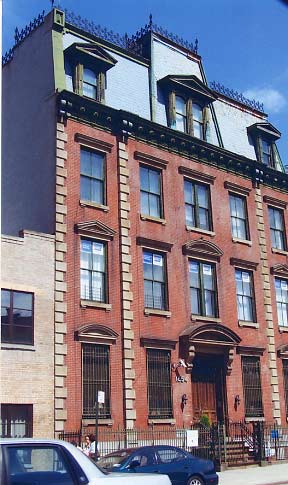 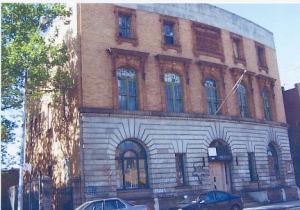 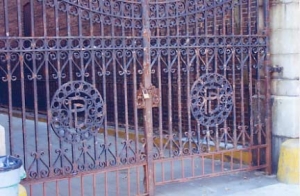 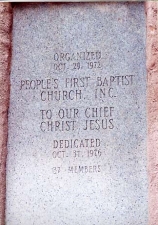 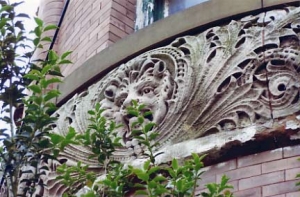 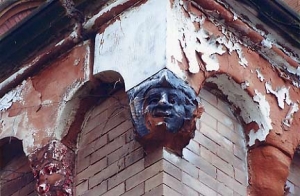 The former 75th Precinct building, a small fortress on Liberty and Miller Avenues in East New York, served a second stint beginning in the 70s as the People’s First Baptist Church (when it probably acquired its stained glass in the windows). But the church also had several gargoyles and green men – pagan symbols anathema to a Christian church. It is presently unoccupied; can it survive much longer? In any other neighborhood, it would have been condo-ized already. 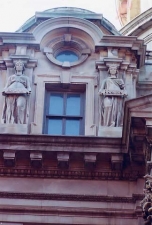 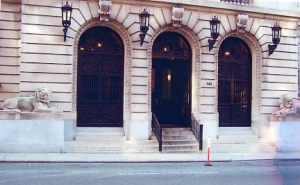 Centre and Grand Streets, Soho: originally NYC Police Department Headquarters. Currently a super-luxury apartment building called Police Building Apartments, it was designed by Hoppin & Krohn and completed in 1909 just as the Beaux Arts movement was beginning to wind down and modernism was around the corner. The lions in front look rather more fierce than the two at the New York Public Library – as befits Police HQ. It was converted to luxury use in 1988, a very early harbinger of the luxe trend that would take hold in Soho in the following decade. Note how it fits into the tight rectangle defined by Centre, Grand and Broome Streets and Centre Market Place.

Till recently, Centre Market Place, in back of the building, always had a gun dealer (John Jovino, the most recent one, has relocated. The ex-1st Precinct on Old Slip in the Wall Street area, completed in 1911, is now the NYC Police Department Museum. 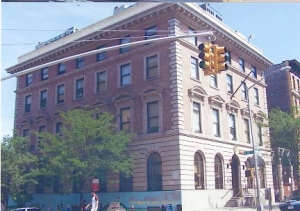 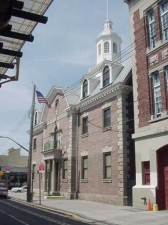 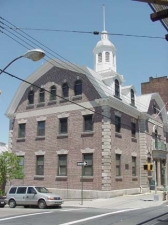 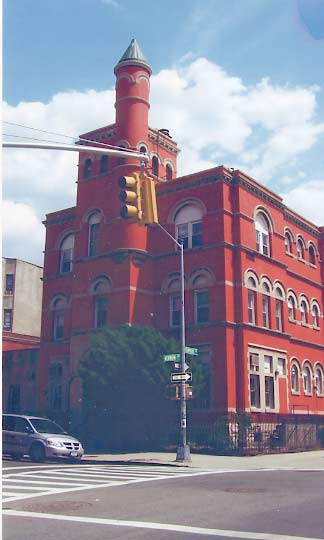 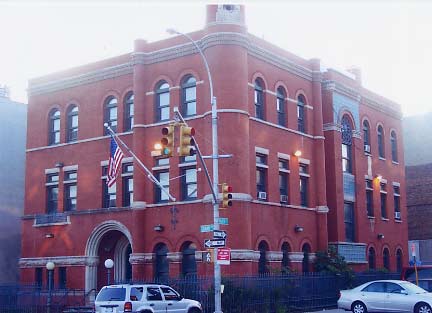 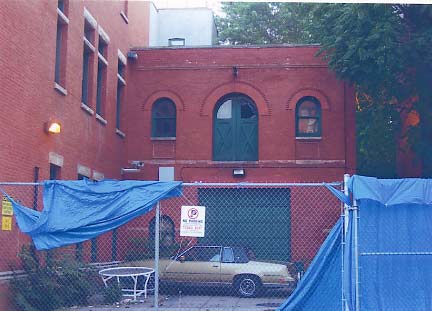 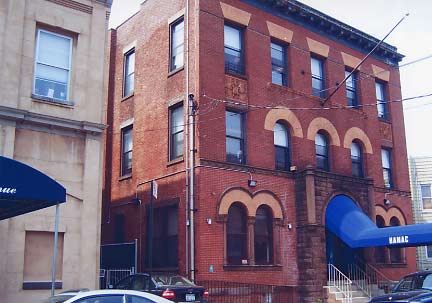 The sadly neglected old 18th Precinct (older 68th), 4th Avenue and 43rd Street in Sunset Park, Brooklyn, completed in 1905 by Raymond Almirall. Also a former music school. With the big money revivals going on in Red Hook and Cobble Hill, will the party reach Sunset Park? Perhaps then this building’s fortunes will be reversed. 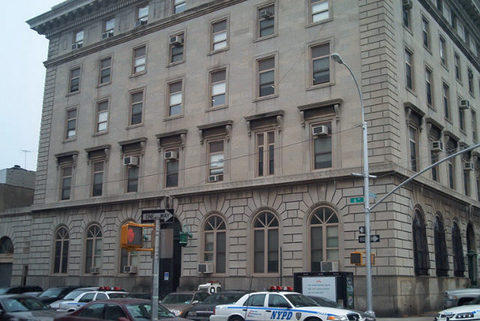 All images this page © Gary Fonville 2006 except where noted. Photographed spring and summer 2006; page composed August 5, 2006.

I spent 9 years in the 83 Pct . The photo brings back a lot of memories. For instance, in the Commanding Officer’s office there is a beautiful Mahogany door that is contoured to the circular tower observed from the outside of the building.Behind the door is a circular steel staircase that goes to the very top of the tower . From there you can see the boundaries of the Precinct..
This was my first command. From Dec 1st,1965 to August 19th 1974.. After being promoted to Detective and transferred to Manhattan’s 10 Precinct Detective Unit. I never went back to the 83, not even for a visit..

I remember you. I think your partner was Mertens in the 83.

Wondering if you’ve ever seen a photo of Willamsburgh’s old 60th Precinct station house. It was located on the intersection of Bedford Ave. and N. 1st Street (NW corner).

That was the location of 92pct
As I remember

I’m looking for a photo of what might have been the 25th or 29th precinct in 1914. It was on east 126th Street. It has been demolished. I believe it was designed by Nathaniel Bush.

I have an illustration of this police station at 146-148 126th Street — it was constructed by Nathanial Bush in 1870 and was originally the 12th Precinct, later the 29th. You can see this illustration in a story I recently wrote about 2 cats bequeathed to President Roosevelt (detectives from the 29th responded to a suicide in this story). The illustration is about halfway down:
http://frenchhatchingcat.com/2014/10/26/lulu-grover-harlem-cats-president-roosevelt/

Re: Grand Ave & Park Place. I worked at the precinct in the late 60’s The command was the 80 Pct. The area is also referred to as Crown Heights. The old stable was later taken over by the Bomb Sqd.

does anyone know the precinct number of the stationhouse located at liberty and miller avenue in Brooklyn circa 1940?

No photos, but my father was at the 81 from about 1966-1979. I would love to see photos, too. I remember visiting the old and new station house and seeing the aftermath of the ’77 riots.

Hi Tom
I have a roster dated 1971 and I see your father was in the 6th
squad. Send me your email and I will send you a copy
My email – csudet@verizon.net

I was one of the first Auxiliary Policewomen at the 90 in the early 1970’s. Wow!!!! has things changed. I also remember taking the police exam, passing – but my darling mother objected to me becoming a full uniform Police Officer.

Do you remember who the BNA Community Affairs officer were ?

The 87th retains two connections to the NYPD, even post-conversion to condos. First, the name of the building is, “The Old Precinct.” Second, the back of the building, visible from the Gowanus, is painted as a recruiting billboard. The painted advertisement lives on in New York!

We have a great, great grandfather who we believe was in the NYC police.. the photo of him shows him wearing a hat with insignia in the center front. Inside the insignia is either 888 or BBB. Does anyone have any idea what this stands for?

Does anybody remember that sandwich shop next to the 73 eastern/rockaway around 1985? The name eluded me,

Robert Spisa: are you any relation to a Robert Spisa (with the FDNY) and Sara Spisa from Woodside?

was Midtown South ever the 35th precinct? Was there ever a 35th district?

There was a 35 PCT. it was located 32 E. 88th St. in Manhattan. It was abolished in 1922. If you notice the police station south of that command was and still is located at E. 67th St.—( Today’s 19 PCT ) The 19 PCT back in 1922 was numbered as the 31 PCT. The other police station north of the old 35 precinct on East 88 is located at E. 102nd St. (formally E. 104th St. ) —(Today’s 23 PCT). Back in 1922 this precinct was numbered as the 39 PCT .
. The police department was planning on re-opening the E. 88th St. station house and for unknown reasons it never got re-established. Now if I could add to this during the year 1929 the police department came out with a modern day numbering system which we have today. So this former command on E. 88th St. would’ve been numbered as the 21 PCT. For reasons unknown the police department never reopened this command. According to the 1926 NYPD annual reports they were planning on which is why in my opinion the number 21 was reserved that’s why the police precincts jump from 19, to 23.

Such an interesting history! Do you have any photo’s or information on the precinct that was on west 68th street? I lived next door when I was a child at 148 w.68th and vividly remember watching through the window as the officers lined up outside, I’m assuming it was an inspection. I really looked forward to that ritual. Memories!
Thanks so much

I believe that was the 20th police pct. I lived on West 83 street ant the 20th pct covered that location up to 86 street

The 78 Precinct is still being used today, Brooklyn Central Bookings is in Downtown, Brooklyn.

the old 90 was on lee ave. and clymer st, not division. The building next door was the Eastern District Hq/Telegraph Building for the Brooklyn Fire Department, before the “Great Mistake of 1898”.

Did anyone reading this work in the 80 pct from 1957 to 1966?…or Bklyn Communications unit on 6Ave & Bergen St (78 pct).. or the Communications Bureau in the old Centre St HQ ?
Tough remembering names for me now! ..but cant forget old Patty Burke and his deli on Prospect and Claussen..(he was there at the 80 pcts pre1900 opening ceremony !). When I left the 80 there were still ’40’s steel air raid helmets and dozens of kerosene lanterns in the basement.

Anyone know when the current 90th Precinct building was constructed?

Thanks for your help.

I worked with Brendan during his time in the old81

My Grandfather was appointed on December 18, 1899. His rank was Doorsman and was assigned to the 61 Pct. Does anyone know where the 61 pct was in 1899. He lived in the Bronx and its hard to believe he commuted from the bronx to south Brooklyn back then. I have a copy of his 10 card but it does not list the addresses of the commands. I have a photo of him in uniform with the high hat.
Can any one help. I tried to google it. NG

78pct is still the 78pct & was the 10pct of the Brooklyn Police Dept same location different building. It then became the 144 pct I
Think of the NYPD & then when the building in the photo was
Built in 1925 as the 42pct / Brooklyn Head Quarters/communications/ Property clerk/ admin Court & other stuff. It became the 78pct in 1929 or early thirties not exactly sure. The 6ave side was the pct entrance. the Bergen street side was the HQ entrance. The Big Brass Plack hanging on the wall behind the desk still says brooklyn Headquarters 42nd Pct erected 1925. There was still an air raid box on the wall behind the Desk & a old gas light fixture on the wall on the right side of the desk .The old communications on the 4th floor with conveyor elf & black phones with red lights on top of them with a call box on the wall & old 1962 Brooklyn pct map with some pcts that don’t exist anymore was still their in the 90’s along with the old court room old cells & giant antenna on the roof & two old elevators one being an old manual operated one

& the old property room & green & white paint on the walls until the pct was renovated in the late 90’s or early 200’s can’t remember exactly. The court room,air raid box & gas fixture old & cells & Property room are still their I think