I don’t do a whole lot of interiors. Usually, that’s because when I enter anywhere with a camera, I’m quickly given the bum’s rush. For over four years, though, I rode on some over 100-year-old artifacts in one of New York City’s most storied interiors…Macy’s.

As far as I know, the World’s Biggest Store, which has been in its present location since 1902, possesses the city’s last set of wooden escalators. Riding the escalators, as well as a couple of forays along the building’s exterior terraces, were the highlights of my work tenure there: I was a catalog copywriter at Macy’s between 2000-2004 and, while your webmaster made some fulfilling friendships that I still maintain, let’s say my Macy’s career was less than fulfilling. Still and all, I’m proud to have worked in such a historic institution. I never got the chance to snap the famed escalators while I was there…and in consequence, this is a FNY page in which the photography and research were done by others. I have relied on photos I found by photobloggers, whom I will credit as best as possible, and research from one of NYC’s foremost railfans, Paul Kronenberg. 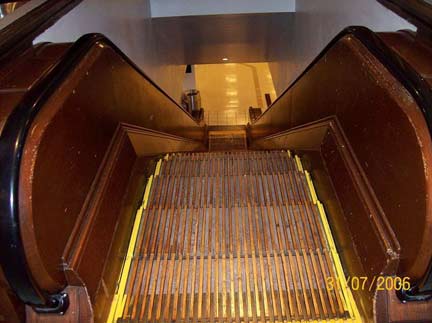 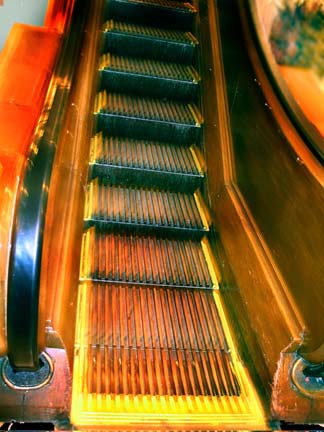 BY PAUL KRONENBERG from nycsubway.org message board, 7/26/03

I was in Macys Herald Square store this afternoon to buy some towels.

On my way out, I remembered our discussion here last week of the wooden escalators and I decided to do some handrailfanning.

In all honesty, what follows is true to the best of my observations but basically just a lot of crap. What is important to me right now is that I had some fun observing the different types of escalators,breaking down the code numbers … The other kick was trying to see if I was being followed while I was riding the escalators and jotting down notes on an envelope. 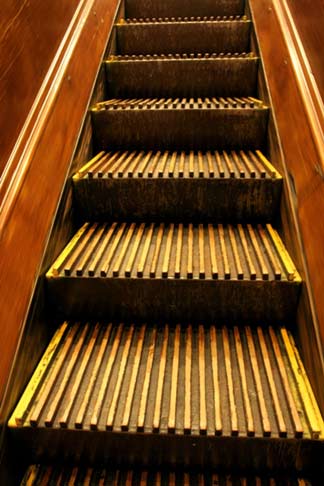 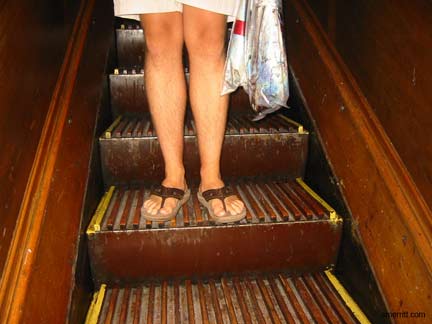 I need to explain some notation.

The oldest escalators have wooded sides and wooden treads (WoWo).

Let’s say you’re going up on line 7 and are between floors 4 and 5. That section of line 7 would be labeled 47. The first number indicates the lower of the 2 floors. If you were going down on line 4 between 3rd and 2nd floor, you would be on section 24. (I suppose only the die-hard handrailfan foamers would really be interested in the above explanation)

So let’s go through the store and describe the escalators… 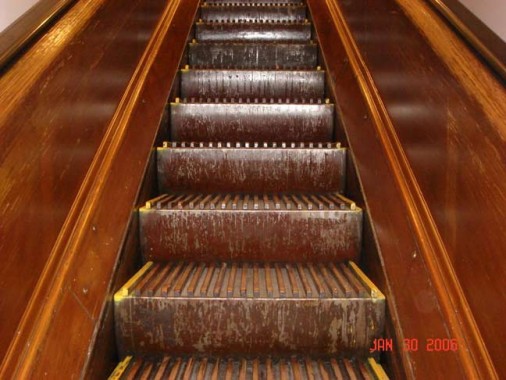 They run from the 1st to the 9th floors.

From the 1st to 8th floors they are WoMe

From the 8th to 9th floor they are WoWo.

2006 update from Paul: There is another set of up and down escalators in the 7th Avenue Building…they are UP line 9 and DOWN line 8.

I resurveyed the place last week (January 2006) and noted that the widths of the escalators vary as well as the width of the treads. I really need to go into there with a tape measure and get data on these widths. 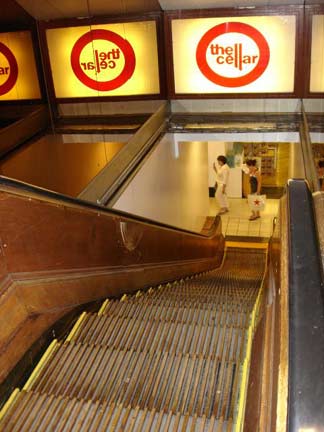 In the Broadway Building there are a pair of escalators in the middle of the store: Up line 5 and down line 4. They run from the Basement (“The Cellar”) to the 8th floor.

They run from the Basement (Cellar) to the 9th floor, with one peculiarity. You can only go down from the lst floor to the basement. There is no up escalator in this pair that goes from the Cellar to the 1st floor.

From Basement to 1st floor: WoWo
From 1st to 5th floors: MeMe
From 5th to 9th floors: WoWo

above photo: WoWo, from 1st floor to Cellar, by Raymond Cheong 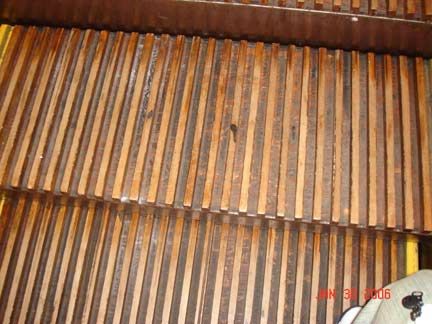 And finally there is just a single up line escalator near the 34th Street entrance at the Broadway end.

From 1st to 6th floors: MeMe
From 6th to 7th floors: WoMe

The only other wooden escalator in NYC your webmaster even vaguely recalls was on the  IND subway, at Hoyt-Schermerhorn I believe…

But since Macy’s strives to maintain a young, up-to-date image, I’m amazed these campaigners have survived into the 21st century. Can their days be numbered?

[…] on some of the escalators, which make the elevators even more unique. Websites like VanishingNY and Forgotten NY have all reported on the replacement of wooden steps with metal over the years. You can see the […]

I was in Macy’s in June 2013 and some of the floors still had the wooden escalators but you can see the replacements happening with new ones on other floors. I will miss the wooden ones.

Did you or any of your researchers observe the gouged wooden disks on the left side of the elevators near the handrail….if so….what made those gouges?

There used to be an wooden escalator at the northeast Essex St. exit of the Delancey Street stop on the F Train. Alas it’s gone now, and I miss it. It had character.

Another stupid mistake at that corner is the closing up of the Main Entrance of the Essex Market which was on Delancey Street, the grand, wide boulevard of the Lower East Side where all the people are. That mistake really damaged the Essex Market.

My Mom would take me to Macy’s on her shopping jaunts in the late 1940s, knowing I’d be happy to come along just to ride those wooden escalators. In March 2019 I found to my amazement they’re still there. It was so shocking that at first I thought they might be modern reproductions.