Disregarding the arrests of Yovanni “NyQuil” Rivera and Marcos Polanco, who went on a violent mugging spree in the fall and winter of 2006-07, and ignoring the story about the five homeless men who robbed, beat and raped a woman in the park in 2002 — your webmaster has been a frequent hiker in Flushing Meadows Corona Park, taking in the leftover fragments of the park’s two World’s Fairs in 1939-1940 and 1964-1965. I’ve done a ForgottenTour there in February 2005 and described its many remaining wonders in a World’s Fair page.

It took a recent photolog in QueensCrap to open your webmaster’s eyes, however, as to how poorly the park is maintained by [outgoing, as of 2012] NYC Parks Commissioner Adrian Benepe, Queens Parks Commissioner Dot Lewandowski, and Queens Borough President Helen Marshall. Today your webmaster comes not to revel in the park’s many Forgotten remnants, but to shed a tear and raise a fist about the sorry state that our executives and elected officials have allowed the park to sink to.

Betcha if FMCP were in the heart of Manhattan, not the heart of Queens, we wouldn’t see the conditions you’ll see here on this Forgotten NY page. Some in Queens have a major chip on our shoulder about how we’re treated in comparison to one or two of the other boroughs.

Like Manhattan’s Central, Brooklyn’s Prospect, Staten Island’s Clove Lakes, and the Bronx’ Van Cortlandt, Flushing Meadows-Corona Park is the signature park of the borough.The 1,255-acre expanse, running from Flushing Bay on the north to the Grand Central Parkway on the south and incorporating Meadow and Willow Lakes, was built by NYC master planner Robert Moses expressly for the 1939-40 Fair atop a former vast ash and garbage dump cited by F. Scott Fitzgerald as “the valley of ashes” in his classic The Great Gatsby. Until 2009 it incorporates the anagrammatic stadia, Shea and Ashe (Shea will be replaced by Citifield that year); it contains the Queens Museum of Art, Terrace on the Park, the New York Hall of Science, and Queens Theatre in the Park, most of which feature the best in 1960s architecture and built specifically for he ’64-’65 Fair.

FMCP’s position as Queens’ premier park, serving both Flushing and its satellite neighborhoods, as well as Corona, Forest Hills and Jackson Heights, makes the following pictures a bit of a shock.

All photos by the Queens Crapper. 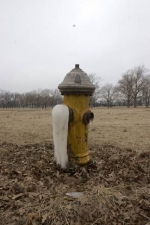 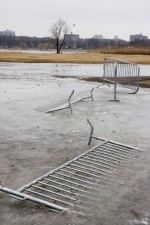 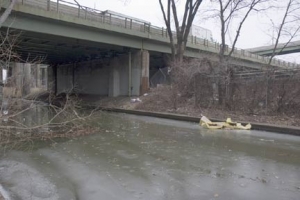 Poor drainage with nonfunctioning or clogged drains and sewers is a frequent problem. Much of the time the walkways are covered with puddles and lakes, which freeze to form sheets of ice in winter. 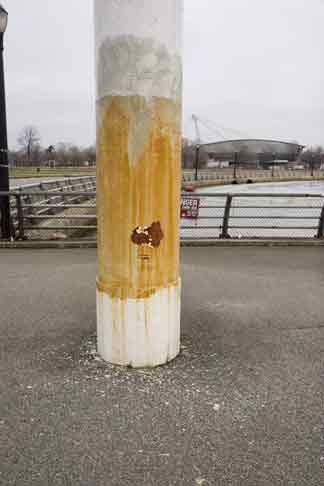 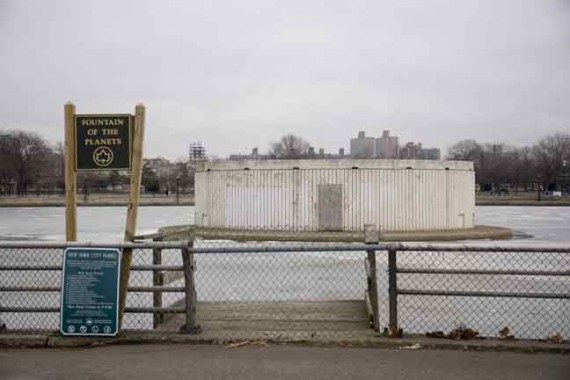 The Fountain of the Planets is described thusly in the 1965 Official World’s Fair Guide:

A gigantic symphony of fireworks, water, color and music occurs every evening.

The Fountain of the Planets, largest in the world, shoots 10,000 tons of water as high as 150 feet into the air in ever-changing patterns. Rockets are fired from 464 launchers; lights totaling 150 million candle power cast their brilliant colors at water and sky; and music plays over loudspeakers. The fountain is automated, allowing split-second coordination of water jets, lights and music in five completely different shows.

These days the Fountain is a huge lake of stagnant, algae-filled water surrounded by metal and chicken wire fencing and makeshift ID sign mounted on wooden posts. For awhile, it was going to be the site of the new Jets Stadium, but Gang Green opted to remain in NJ with the Giants.

The Fountain’s main attraction seems to be two humungous flagpoles (which are themselves rusting) visible from throughout the park, topped by a pair of militaristic-looking eagles reminiscent of something the Nazis would use for symbolism.

How to patch a mosaic 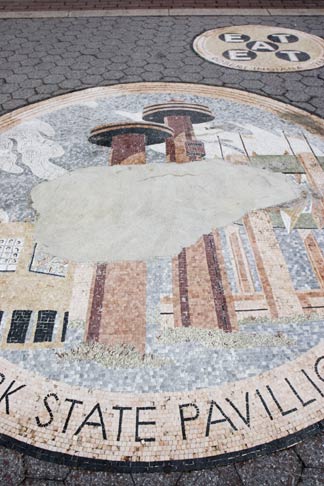 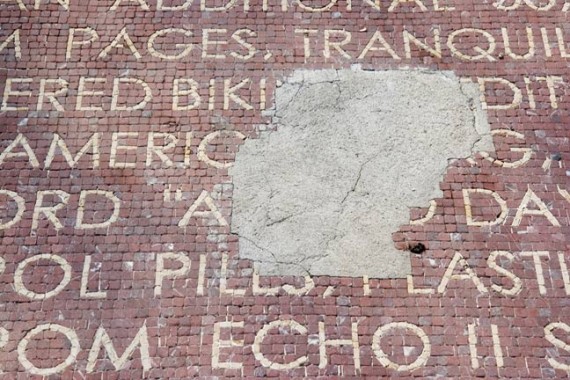 When you leave the #7 at Willets Point Shea Stadium and head toward the park, you walk on a long trestle that crosses the IRT Corona yards and the Long Island Rail Road, and then descend to a circular plaza that was one of the fair’s main entrances, and remains a main conduit into FMCP. It’s ringed by colorful mosaics depicting scenes from the ’39-40 and ’64-’65 Fairs, including Salvador Dali’s “Venus” (’39-’40), Elsie the Cow (’39-’40), and Andy Warhol’s portrait of Fair mastermind Robert Moses (’64-’65; Moses didn’t like it.)

Not only have the towers of the New York State Pavilion been left to deteriorate, the colorful mosaic representing them here has recently been given a hurried concrete patch job, yet another insult to the Philip Johnson classic, as has another panel featuring the contents of a time capsule scheduled to be opened in 6964, 5000 years after its burial. 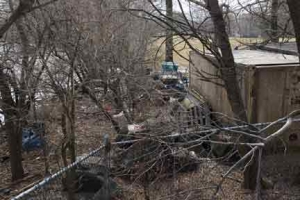 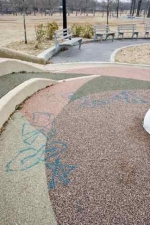 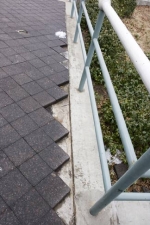 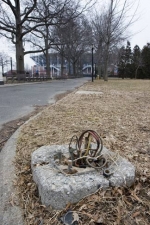 The park is generally in disrepair, with graffiti’ed public areas, broken lampposts, pathway tiles in disarray, and even the golf course is used as a dumping area.

During the summer, for either park events, US Open Tennis at the Ashe, or ballgames at Shea, the grassy areas of the park are used to idle and park buses.

A couple of years after the second World’s Fair closed the city installed a marble monument inscribed with the names of the heads of state that visited the ’39-40 and ’64-’65 Fairs on one of the service roads near the Singer Bowl, now Louis Armstrong Stadium.

Sometime during the 2006 US Open, a tour bus knocked over the 3-sided plynth and there it lay for over 3 months, until during the winter the Parks department propped it back into place…

…with a huge chunk missing that includes the names of Harry S Truman and Dwight D. Eisenhower! The Park Watchdog shows the statue intact while it lay on the ground, only to have inept park workers apparently knock the chunk out while restoring it upright!

Designed by Philip Johnson, perhaps the 20th Century’s greatest architect, the NY State Pavilion was among the most striking buildings at the Fair when it opened. It consists of the “Tent of Tomorrow” made up of 16 100-foot columns supporting a 50,000 sq. foot roof of multicolored panels (which was removed in the 1970s) as well as three towers, measuring 60, 150 and 226 feet tall. Fairgoers could ascend top the top of the towers via “Sky Streak” capsule elevators. Inside the pavilion, there was a scale model of the new St. Lawrence River hydroelectric plant, NY State industry information, artwork from the 19th-century Hudson River School, and portraits of NY State colonists. 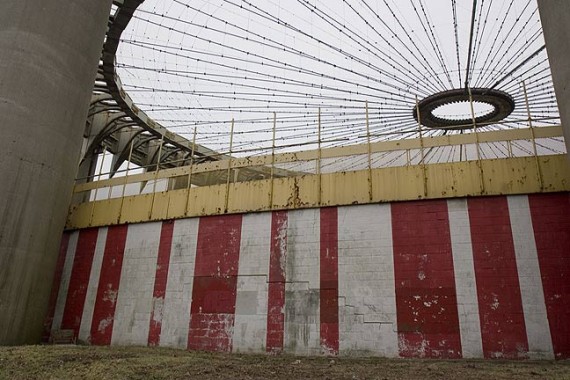 The NY State Pavilion contained striking visuals both above and below. Texaco funded a giant map of New York State on the pavilion floor with 567 mosaic terrazo panels weighing about 400 lbs. each. Rand McNally supplied the topographic information, and Texaco furnished the location of each of its gas stations in the state. When the pavilion’s roof was removed due to its deterioration borne of general negligence, the Texaco map was open to the elements. It’s still there, but padlocked and severely decayed. The “Sky Streak” elevators are still there, awaiting reactivation if that ever happens. 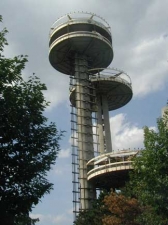 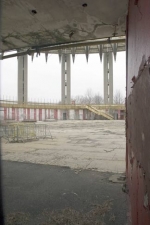 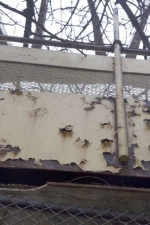 Today the Texaco map is barely recognizable, as it is now pitted and rutted; the Sky Streak elevators in the towers are rusted in place; the metal webs of the Tent of Tomorrow whistle in the breeze, which occasionally dislodges them. The effect is one of absolute and total neglect which is what the NYC Parks Department has accorded it every year since 1965. Even the red light for aviation at the top of the tallest tower has failed. 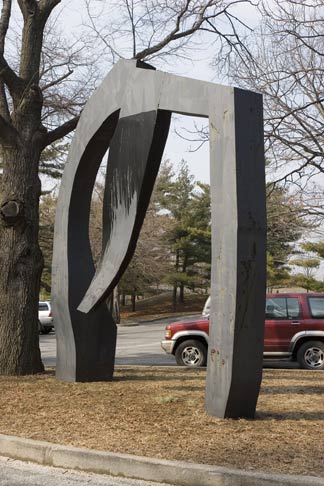 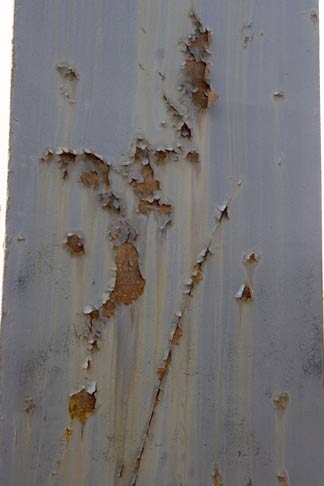 Is there a way out of this…a way to make Flushing Meadows Corona Park once again Queens’ crown jewel? Of course…just devote a few hundred thousand, and then maintain the property. But that will take a political and moral will that few Queens leaders possess. Take a look at what Queens Plaza became over the decades, and what Flushing is turning into. When the first thing you see coming east on the Queensboro Bridge or the IRT Flushing Line is a cesspool, when a formerly suburban commuter town becomes as barren-looking as a prison compound…what do you expect to get done?

Hi,
I am making a documentary film about the New York State Pavilion. If anyone has pictures or stories that they wish to share, contact me through my gofundme page. Im trying to get people to see this building rather than see through it. Maybe its not too late to save it.