It’s never hip or cool to be a nostalgist. I’ve always been a nostalgist, and have never cared about being hip. I return to Bay Ridge frequently. But when I lived in Bay Ridge I was tortured by the nuns and students of St. Anselm’s School; I later worked nights and made very little money; the house I lived in was uninsulated and drafty; the train rides were interminable, especially when the Manhattan Bridge was closed nights or during trackwork.

For me though it was an occasionally pleasant place. There were the brownstones and attached homes (which I could not afford, then as now), the water views from Shore Road, the propinquity of family. But my nostalgia for Bay Ridge is not predicated on a former ‘good life’ that has somehow since proven elusive; it is the simple remembrance that I was in a particular place at a particular time. I did not choose to be born and reared in Bay Ridge, but I was there, and there I still occasionally am.

Today I’ll look at my old block, which I’ve always considered interesting, and a bit of the avenue it intersects. 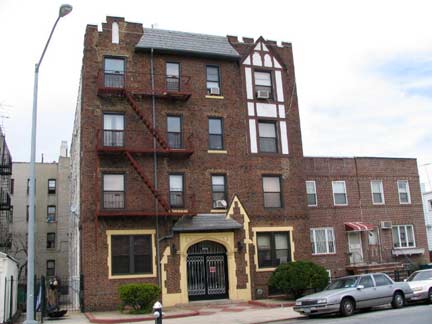 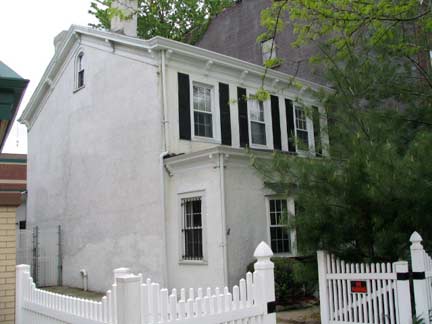 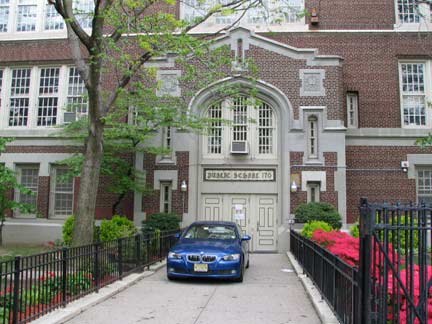 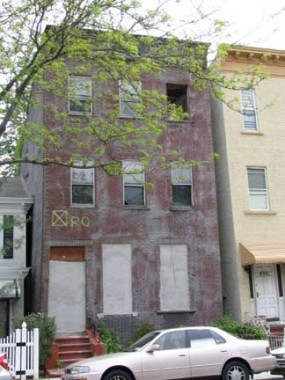 6th Avenue at 71st, Ovington Avenue, and Bay Ridge Avenue. The architecture is ‘all over the place’ around here. Check the front entrance on the top photo: It was probably once more symmetrical, but the fire escape wiped out the left side.

There’s also a small, stone cottage, an abandoned building that was deserted when I lived here in the 1980s, still is, and will likely remain abandoned until the undetermined, but certain, date of its demolition for boring “Fedders” style brick building; and PS 170, which has reigned over 6th Avenue like the silent Sphynx since the earliest days of the 20th Century.

Ovington Avenue is one of Bay Ridge’s more unique routes. If you look at a street map of the area, you’ll see that it sort of meanders slightly against the street grid, and bounces around as well. That’s because it predates the grid and was a part of Ovington Village, a small town adjoining Bay Ridge in the 19th Century. 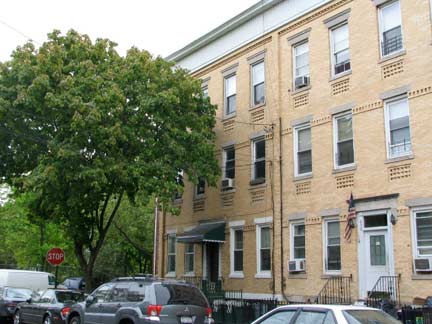 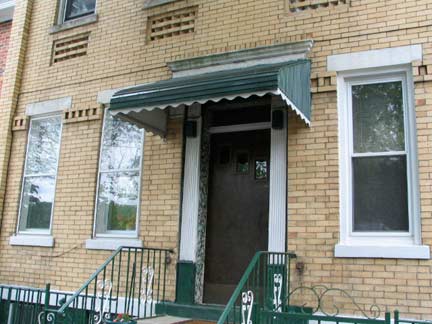 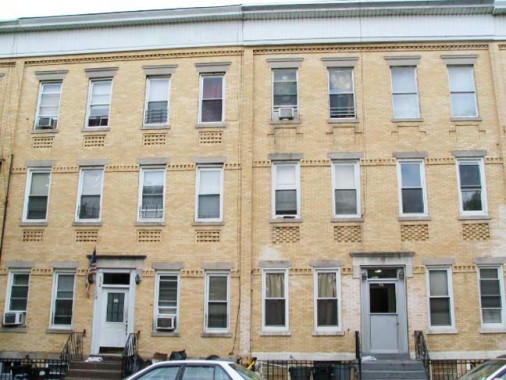 The buildings have subtle differences. The ornamental brickwork below the third floor windows is different on the building on the left (652) than 648, on the right. All have had more ornamental friezes in the past that looked like this one, but by the 1980s all were replaced with the tamer ones shown here.

Want to go on in to my place? Why not? 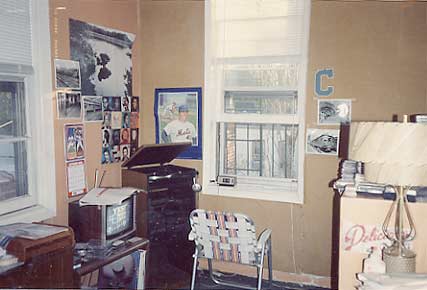 Let’s see…this is the media room, stereo, LPs, TV. The photos on the wall are old subway cars; the poster, of Julian Cope wearing a turtle shell, accompanied his 1984Fried LP (and Cope certainly was and still is); the other one came with Face Dances, the Who’s first offering after Keith Moon’s death. I acquired the Tom Seaver poster on July 24, 1988 when the Mets retired his number 41; I got the TV at Harvey Electronics on West 45th Street in 1984 and still have it; the stereo is in my bedroom, though I haven’t yet plugged it in since my move in July 2007; I got the lamp from a girl I knew in college; and I favor lawn chairs for relaxing indoors, since they can be pushed in and out so easily. I loved the views from this room, since the windows faced south (to the Verrazano Bridge) and east (to McKinley Park.) You can see the wallpaper coming loose and plaster falling on the floor.

I am older now and my walls in Little Neck are much more spartan. 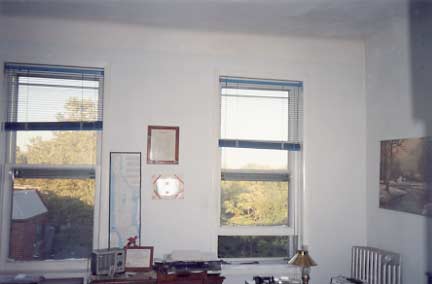 You might not believe that I was a lettered athlete in both high school and college. But that is true; C (Cathedral, in the left photo) and F (St. Francis College, center between the windows). I was on the bowling team in both schools. There’s a subway map on the center wall, a heater on the desk (I still use it, though the heat snaps off after 30 minutes and you can’t turn it on again;) the picture on the wall at right I fished from the garbage one day (as I write this I am sitting on an office chair I found on 43rd Avenue) and a lamp that lit up when you touched it. I forget what the center plaque was. The blinds are blue Levolors I got from a place on Bay Ridge Avenue in 1983. I liked them so much, they followed me all the way to fab Flushing, though they clashed with several paint schemes. You can see McKinley Park, 73rd Street and the expressway from this window. 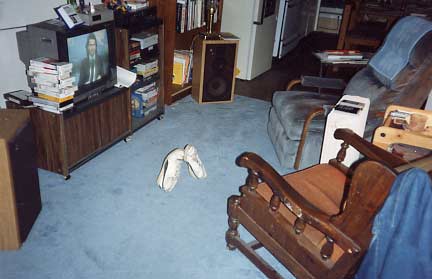 The living room. I still have the orange chair, though the blue recliner is long deceased. I have the wood and glass stand too. You can’t see it well but the kitchen table in the background I have also kept. They do what they do; why throw them out? I also still use a VCR. I bought the TV in 1984 — perhaps from Macy’s, which had an electronics department then. It was my first square-picture TV. I had it until 1990, when local youths entered my apartment and reappropriated it for neighborhood use. I loved that blue carpet and mourned when it did not follow me to my next apartment.

I still have the TV cart, too, though the glass door no longer works, and I’ve lost the pegs that hold up the shelves. I am all thumbs, so one day in 1985 a friend came over and put it together for me. I have stopped buying Ikea, because their pieces all require assembly and I never learned carpentry.

I took 2 of the 3 photos when I was moving, with extreme regret. The owner had pulled a fast one on your naïve webmaster and claimed his daughter needed the place. I moved out and two months later, the landlady met me in the street and invited me over. They had renovated the place and asked me to take it for $200 more than the old rent. Clinging to a last scrap of pride, I turned down the offer. 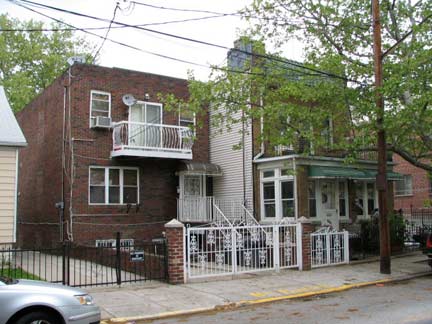 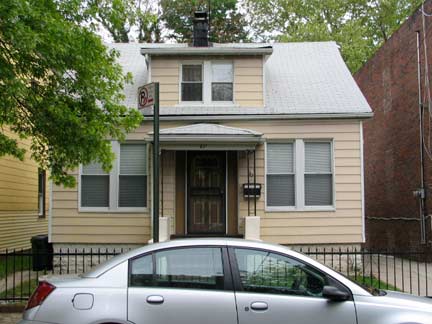 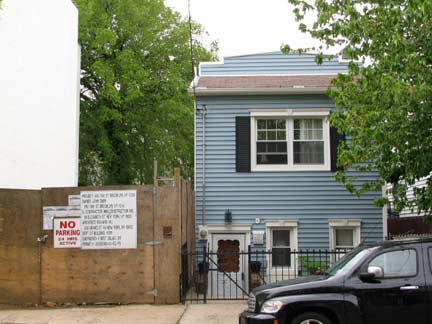 Though 73rd Street extends from Narrows Avenue in Bay Ridge all the way to Bay Parkway in Bensonhurst, my block was a one-block route because 73rd takes a jog at 6th Avenue and doesn’t run through. (The Gowanus construction cut if off on the east end.) The street has all kinds of architecture, including the small cottages shown here.

Note the somewhat inferior one at the top. It was built in the early 1990s. After I moved out in 1990 there was a 4th of July block party a block over on 72nd Street, and some sparks blew over and burned down the cottage that was there previously. Until Rudolph Giuliani cracked down on illegal explosives during his administration, the Glorious 4th was an irritation at best and torture at worst for your webmaster.

I also liked living on a street that was a prime number. 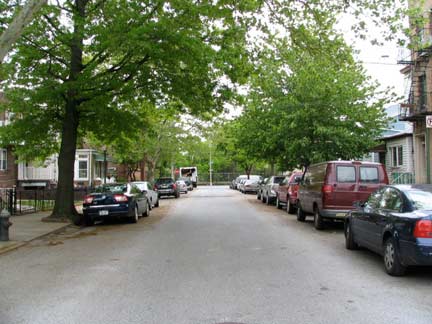 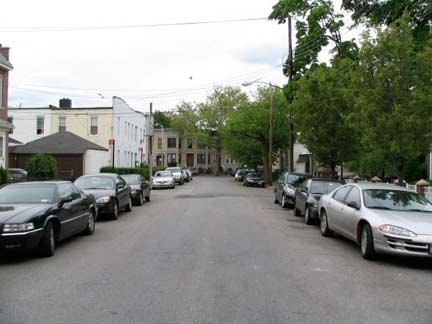 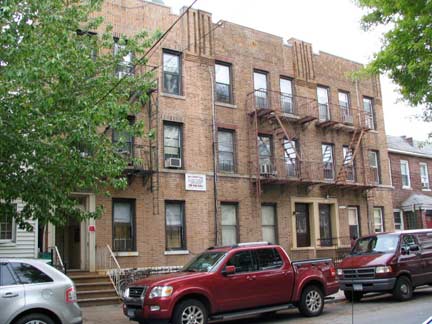 As I’ve mentioned I always wanted a brownstone, but the hourglass begins to move along. This superior one at 7416 is on the west side of 6th Avenue. The architects built a curve into the front, so the windows have two views. A subtle touch but a thoughtful one. Note the old-fashioned friezes.

The otolaryngologist (ear and throat doctor) replaced an older detached home shortly after I moved away in 1990. It attempts, with some success, to echo the curved brownstone across the street. 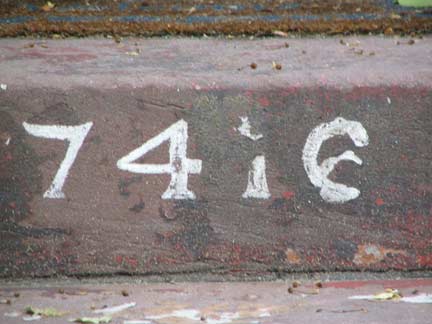 The address is rendered in stained glass and a stencil on the stoop. 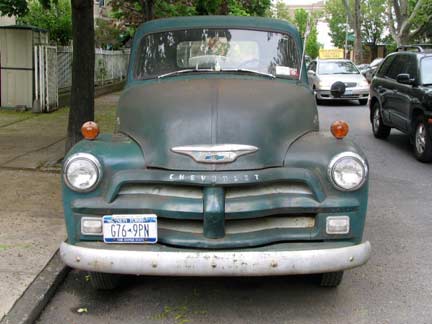 6th Avenue and Bay Ridge Parkway (75th Street). The Disney flick Cars came out in 2006 but there had been anthropomorphism of car forms long before that — for example, the grille of this Chevy truck rather resembles Ikar, the alien in The Outer Limits’ Keeper of the Purple Twilight.

I’ve been searching for articles regarding this curious phenomenon…can you find any?

I was born in 1948 at the Bay Ridge Hospital, which I believe was on Ovington Ave. It must have been long gone by the time you lived in the neighborhood…

That became a nurses training facility, then an old folks home.