I was surprised, and disappointed, to see one of NYC’s iconic painted walldog ads is gone, as the giant Wellner Motors ad on Greenwich Avenue facing 8th opposite Jackson Square has been cruelly sandblasted out of existence. For decade after decade, long after its titular garage had left the scene, it had advertised sales, service and parts for GMC trucks, as well as parts and repairs for Fords, Mercurys and Lincolns. There was a separate ad for a garage on West 12th, Castle Garage, featuring “day & night parking” and showing its alphanumeric CHelsea phone number.

The still-red hot NYC real estate market has spoken, and these sort of relics are not appreciated by the moneyed class these days, apparently. 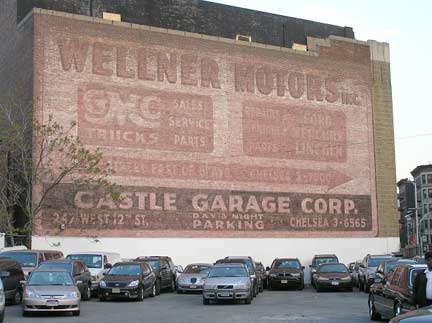 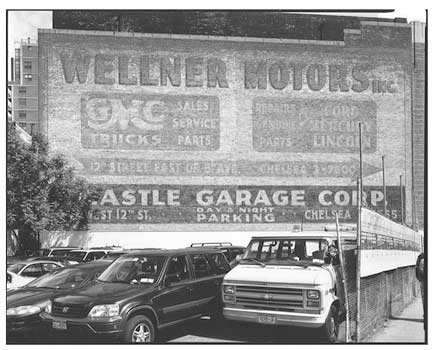 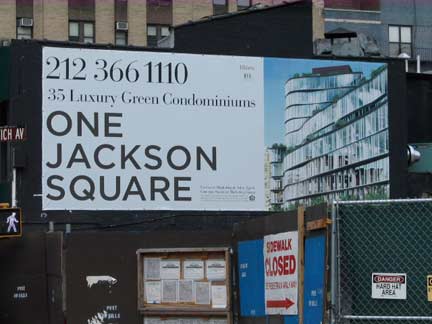 The sign was apparently considered declassé by the developers of the new “luxury green condominiums” One Jackson Square, which will soon (as of August 2008) construct an object of exceeding tastelessness on the old parking lot seen in the foreground. The thing is, the new building would have rendered the Wellner sign invisible from 8th Avenue, and it would have been seen only by residents facing it. I suppose that was the point of removing it; now they’ll have only a blank wall to look at, if there will be windows facing it at all. 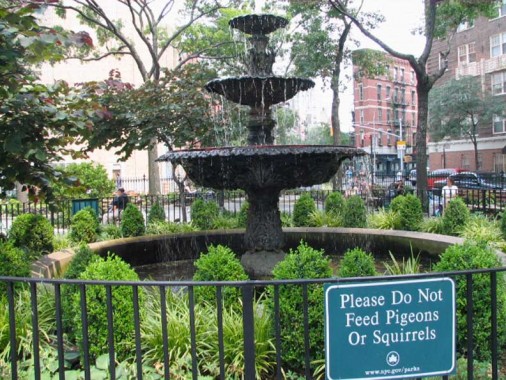 Meanwhile, Jackson Square soldiers on. Located on the triangle between 8th and Greenwich Avenues and Horatio Street, it has officially been a public park since 1872, though it appears as a “square” on maps prior to that. It’s widely thought that the square is named for its most obvious honoree, President Andrew Jackson ( 1767-1845) since “Old Hickory” had been a hero in Tammany Hall circles. However, Mozart Hall, a faction that had split off from Tammany, met in a building called Jackson Hall at #2 Horatio across the street from the park. Mozart Hall founder Fernando Wood was elected mayor of NYC in 1859 after winning from Tammany in 1854. 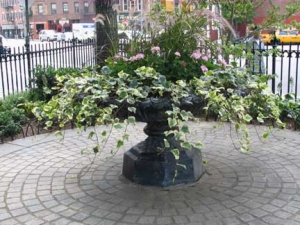 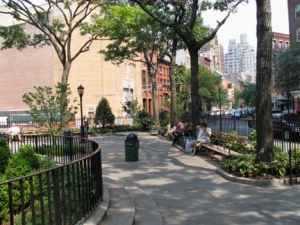 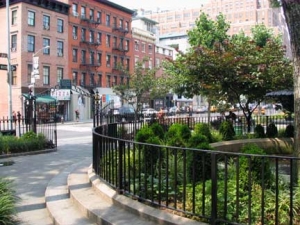 Although the park underwent renovations in 1990 and 2007 (the former was responsible for the castiron fountain, seen above) it seems like a very retro, old-fashioned park and has a very genteel atmosphere, with gentle, curving pathways and planters. 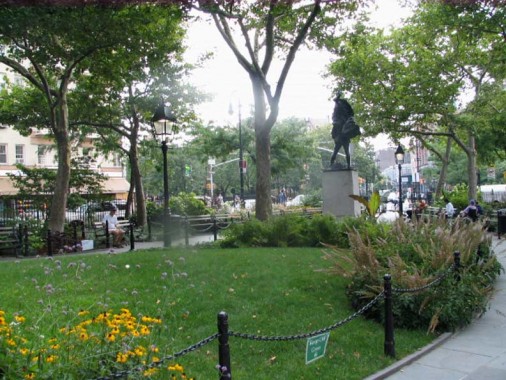 Moving about three blocks south on 8th Avenue we find yet another triangular space carved into the NW-SE slant of the Greenwich Village street grid clashing with the up-and-down orientation of 8th Avenue, wedged between West 12th and Hudson Streets and 8th. Abingdon Square is a rare relic of the British occupation of NYC prior to the end of the Revolutionary War in 1783.

Most of Greenwich Village, in the pre-Revolutionary War era, belonged to British Vice-Admiral Sir Peter Warren, whose oldest daughter, Charlotte, wed Willoughby Bertie, the Fourth Earl of Abingdon; her dowry included the patch of land now called Abingdon Square. It retained its name, despite NYC’s systematic excision of street and place names evincing British royalty in the post-Revolutionary era, since the Earl had sided with the patriots. The plot, which had attained its present layout by 1827, was designated a park in 1831, making it arther older than Jackson Square as a public place of recreation.

One of New York’s more important colonial-era roads was Abingdon Road, named for the Earl, which ran in what is today the roadbed of 21st Street from the Hudson River east to First Avenue; the road was also referred to as Love Lane. When the Manhattan street grid was constructed in the early 1800s, most traces of Abingdon Road and other aboriginal Manhattan thoroughfares were eliminated. If you’re curious, you can read about these long-lost lanes in Thomas Janvier’s 1894 In Old New York.

BTW, I wish digital cameras would have devices that would warn you when there’s a smudge on the lens. 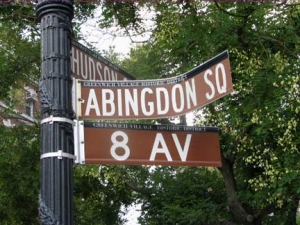 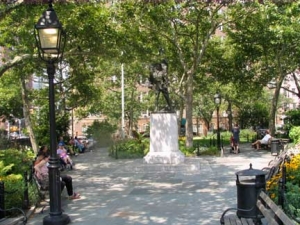 The Abingdon Square statue, sculpted by Philip Martiny, was dedicated in 1927, the square’s centennial, and depicts a World War I doughboy.

The monument was a gift of the Jefferson Democratic Club, whose headquarters once stood opposite this statue on the site now occupied by the residential high rise at 299 West 12th Street. Philip Martiny was a well-known sculptor of his day who received numerous public commissions, among them the statues on the Surrogate Courthouse in Lower Manhattan, and the Chelsea Doughboy at 28th Street and 9th Avenue (for which the same model posed). The unveiling of the statue is reported to have been attended by 10,000 spectators, including 200 Gold Star Mothers (those who lost their sons in battle), and New York Governor Alfred E. Smith. NYC Parks