A venerable relic of the era when outings to cemeteries were the Sunday rage, Niederstein’s Restaurant stood on Metropolitan Avenue (formerly the Williamsburg and Jamaica Turnpike) from the early 1850s to 2005.

At first a roadhouse on the Brooklyn & Jamaica Turnpike just east of 69th Street, it later served travelers journeying to nearby Lutheran Cemetery. Over the years its interior and exterior were altered to such a degree that it was deemed unworthy of protection by the Landmarks Preservation Commission, and in 2005 it was razed and replaced with an Arby’s Roast Beef fast food palace, which has a tacky boulder decoration marking where the old place once stood. Across the street, on Niederstein’s parking lot a new boxy building arises, advertising a prominent air conditioner manufacturer. Oddly, the parking lot sign stayed resolutely in place throughout construction. 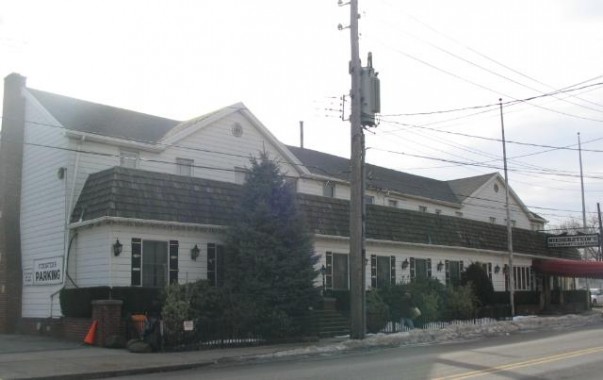 The roadhouse was constructed by Henry Schumacher in the early 1850s and was purchased by German immigrant John Niederstein in 1888. Niederstein, a cook by trade, had made money operating the Yorkville Assembly Rooms on 2nd Avenue in that Manhattan German stronghold after his arrival in the 1860s.

Niederstein greatly expanded Schumacher’s roadhouse in response to the popularity of Sunday outings in the Queens cemetery belt, adding two wings on each side and eventually building 32 rooms. Besides cemetery outings, holidays became a great source of business, with Decoration (Memorial) Day the most popular one, followed by Mother’s Day and June 15th, which was in the early 20th Century celebrated as Slocum Memorial Day; the General Slocum steamship had burned in the East River on June 15th, 1904, killing over a thousand day trippers mostly from the lower East Side and decimating what was then called kleindeutschland — “Little Germany.” 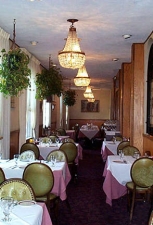 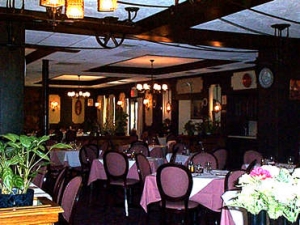 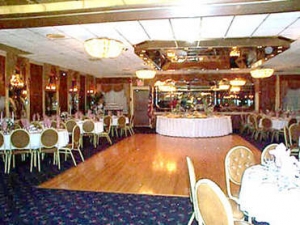 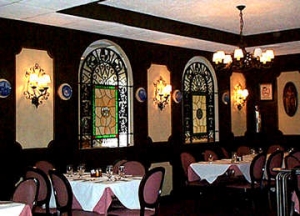 Niederstein’s had changed ownership only a few times in its history; from 1969 to its demise in 2005 it was owned by Reiner and Horst Herink.

In the modern era, the old fashioned way of doing things gave way to modern improvements. For example, Niederstein’s collection of heavy wooden ceiling fans were connected with a belt to a single long axle running to the dining room from the bar — powered, according to legend, by a man on a bicycle in the basement. Thankfully, Willis Carrier’s creation, air conditioning, gave the man on the bike something else to do.

In Niederstein’s heyday the restaurant served over 130,000 dinners per year, which over the last 20 years of operation came to 330,000 pounds of sauerbraten along with 330 gallons of gravy, as well as 200,000 pounds of pork loin. 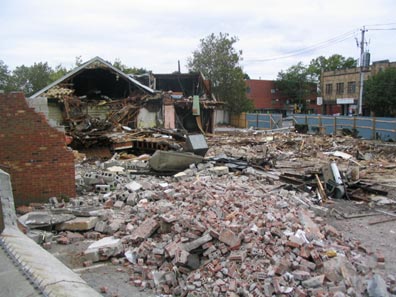 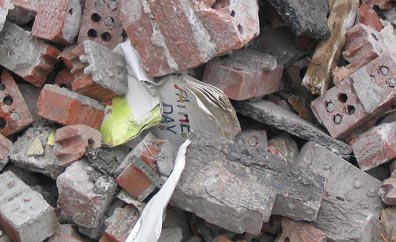 Patronage steeply declined in the late 1990s and early 2000s and finally, ownership decided to close Niederstein’s and sell the property; an Arby’s franchisee purchased the property for $1.6M in late 2004, the restaurant closed in February 2005 and it was razed several weeks later.

My great-grandfather, George Borst, who was born in February of 1862 and who lived in Manhattan (Hell’s Kitchen), drove a horse-pulled coach which he owned to cemeteries in Queens for funerals. On occasion he would allow his daughter, Rose, who was one of 12 children and my grandmother, to drive with him when he worked the funerals. They would go over the 59th Street Bridge to one of the cemeteries in Queens and afterwards he would take the funeral group for dinner at Neiderstein’s on Myrtle Avenue. Following this tradition my family always ate there after a funeral up until the time my father died in December of 1998. Neiderstein’s has since closed and someone told me a McDonald’s was built in its place.

Niederstein’s Restaurant, a 150-year-old Middle Village institution and the oldest restaurant in Queens, was demolished last Friday to make way for Arby’s and retail stores.

My great grandfather, John Fluhrer, was Niederstein’s manager in the early 1900s. A 1915 photo of him and his staff in front of the bar was said to hang in the restaurant up to the closing. I had contacted the restaurant to see if I could buy the photo and someone there — perhaps Mariah Hochhauser, the last manager — told me that I could have it if I came to the restaurant to pick it up. An illness and death in the family distracted us from doing so and once the restaurant closed, it was too late. If anyone knows the whereabouts of the photo, or how I might contact the last owner, Rainer Herink, or Ms. Hochhauser, I would really appreciate hearing about it at dfluhrer@optonline.net. The photo might not have much use to others, but to us, it would be considered a treasured family heirloom.

I visited NY (from California) in 1976 (16 years old) with my family, and my uncle who had spent a lot of time in NY took us to this restaurant. It was one of the most memorable things about the whole trip. I remember that I got a stuff chicken breast dish that was delicious! I still have a souvenir book of matches that I picked up there that night. Most of my family on that trip are now gone, but I will always have good memories of the night we ate at Niederstein’s Restaurant.

My father, William Lindberg, grew up with Carl Niederstein Jr and worked as a manager for a period in the restaurant. My mother and father met when my mother’s sister had her wedding at the restaurant and my father was the manager in charge. My mother had an argument with my father over one of the arrangements, as an apology he bought her a drink at the bar after the party was over – the rest is history – their wedding reception was at Niederstein’s restaurant, Carl Niederstein was their best man. I grew up in my early years going to the restaurant after visiting Lutheran cemetary – the last visit to bury one of my Aunt’s. I did not know it was gone, so sad, so many good family stories came from Niederstein’s – especially my parents meeting! My Dad contacted Carl a few years ago and they talked on the phone from time to time but now we have lost contact.

my grandfather harold wood (happy) was bartender there for many years. ,many happy memories there. sorry it was torn down. in 1988 my uncle died and was buried at that cementary and we had lunch there. glad i went.

I WENT TO NEIDERSTEINS ONLY A FEW TIMES. LAST TIME I WAS THERE WAS APRIL 1995, AFTER MY DISCHARGE FROM THE NAVY, MY FATHER THREW ME A SMALL PARTY THERE, ALL MY FRIENDS & RELATIVES CAME, HAD A GREAT TIME. WHEN I HEARD IT WAS CLOSED I THOUGHT THE PERSON WAS LYING. BUT, TOO BAD IT DID CLOSE. I THOUGHT IT TO BE THE BEST GERMAN RESTAURANT IN NYC. I JUST LOVED THE FOOD THERE, NOTHING WAS BAD. THE ONLY GERMAN RESTAURANTS LEFT ARE ZUM STAMMTISCH & CHALET ALPINA ON METRO. THEY ARE BOTH GOOD BUT NOT LIKE NEIDERSTEINS!! I REALLY MISS THIS PLACE, REALLY. I WISH IT NEVER WOULD HAVE CLOSED. BUT I REALLY DO WISH NEIDERSTEINS WAS STILL OPEN.

I have never been to Niederstein’s and it saddens me because my family owned it for many years. I wish I could have at least been there once, but I know my father has many fond memories & I have seen many photo’s in its heyday. Truly a piece of history that we can never get back. I am proud of my German heritage & even prouder that my ancestry’s were part of such a fine establishment & community. Niederstein’s was & always will be a family.

How sad, the restaurant could have easily been brought back by hacking out the dated 70’s interior, putting the ceiling fans back and restoring it to the German Roadhouse it once so proudly was. No vision here, Middle Village is looking like a cheap, overpopulated, Flushing Main St. How very sad.

“no vision here” Right, because vision is all once needs. Forget money…

What happened to the Larden family ? Bob Larden?

Well I liked Arby’s until I came to eat at NIEDERSTEIN’s after many years away from NY, my son is moving back, so I will be here. I was shocked NIEDERSTEIN’s is gone. It always amazes me how a 100 year old famous restaurant can’t leverage their name to make money, yet a dump like Arby’s can. No Arby’s for me ever again.

Between Neiderstein’s and Kopp’s Middle Village was the place to stop while visiting NY, now, it’s time to find new places.

These memories are amazing. Thank you for starting this page. I am the great grand daughter of John Niederstein. His daughter, Maxine, was my dad’s mom.

Thank you for sharing these wonderful stories of Niedersteins and starting his webpage. I am the great granddaughter of John Niederstein. His daughter, Maxine, was my Dad’s mother.

Hi Cheryl Hahn Rice,
John Niederstein was my Great Grandfather. I would love to correspond with you, cousin, as I never met you.
Grace Niederstein Schlesier.

Hi Website Person,
Thank you for putting up this Website. I Have much family Heirlooms and Photos. Some information on the Slocum disaster as the Slocum Organization used to meet at the restaurant.

My first visit to Niedersteins In 1957 was arranged by locally well known attorney Adolf Schauer, at that time very involved with Gottscheer immigrants from war torn Europe. Through the Lions Club, he arranged for graduating elementary school students to receive a so-called Scholarship medal in recognition of academic achievement. The group was then invited to a luncheon at Niedersteins…I am guessing it was at a regular club meeting. One vivid memory for me was the wooden porch which ran the length of the building in front of which stood iron hitching posts where horses were once tied. Amazingly 60 years later I am still in touch with two other students who attended this event.

My wife and were married in Neiderstein’s on September 25, 1999. We had our engagement party at Duro’s now all we have are the memories.

I used to work at that beautiful place. Was there for 20 years,1978-1998. I was married in 85 and had my wedding there. My daughter was born in 1991 and we had a few great affairs there. My older daughters Graduation. And then my other daughter Graduation. Great place to work for ,great people,great food. Loved Mrs Herink. Miss it all.

SO DAMN SAD TO SIT HERE AND REALIZE NEIDERSTEINS IS CLOSED FOR GOOD, REALLY WISH IT WAS STILL OPEN, COULD GO FOR SOME GOOD GERMAN EATS AND DRINKS TONIGHT. REALLY WISH THEY OPENED IN A DIFFERENT AREA OF QUEENS………………..

REALLY WISH THIS RESTAURANT WAS STILL OPEN!! STILL DONT KNOW WHY THEY DECIDED TO CLOSE IT, VERY SAD!!!!!!!!!!

Nice plave. Ate there several times when we worked at Profit Control/Heidelberg Eastern on the corner or Metropolitan and Woodhaven back in the later 80s early 90s.

WHAT A DAMN SHAME!!! ONLY REAL GERMAN RESTAURANT WORTH EATING AT IS ZUM STAMMTISCH, USED TO BE A HANDFUL YOU COULD PICK FROM, CHALET ALPINA WAS A FAVORITE OF MINE, CLOSE TO THE HOUSE, GOOD FOOD AND NO WAIT FOR A TABLE, GONE!! I CANNOT BELIEVE QUEENS LOST SO MANY GOOD GERMAN RESTAURANTS OVER THE YEARS, GIVEN THE RICH GERMAN HERITAGE THE BOROUGH HAS. JUST A SHAME!!!!!!!!!!!!

DOES ANY ONE KNOW THE REAL REASON WHY NEIDERSTEINS DECIDE TO CLOSE?? IT CANNOT BE FOR LACK OF BUSINESS, PASSED BY MANY TIMES, SAW MANY, MANY PEOPLE IN THERE. IF ANY ONE KNOWS WHY,,,, PLEASE POST, WOULD LOVE TO KNOW WHY. REALLY APPRECIATE THIS. THANKS A MILLION, HOPE TO HEAR FROM SOME ONE SOON. JEFF COSTIGAN.