Though San Francisco is much smaller in total area than New York, its strict grid street system provides ample opportunity for builders to include alleys in its street plan. While Manhattan is unaccountably alley-poor, San Fran presents multiple opportunities for intrepid alley hunters… 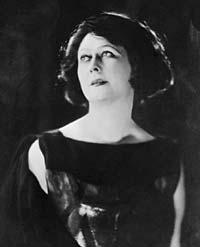 As a rule San Francisco street signs dispense with designators such as “Avenue” and “Street” even though they do exist. San Franciscans usually refer to city streets without them. The signs, though, helpfully provide an alley’s old name when it has been renamed along the way.

Duncan (1877-1927), a native San Franciscan, was a founder of modern dance after moving to Paris in 1909, where she was among the first to break with traditional ballet, and became wildly popular. Her sympathy with the Russian revolution in 1918 caused her to relocate to the Soviet Union for a time. Duncan, who wore flowing scarves both in performance and for street wear, was killed at age 50 when one such scarf became entagled in the open axle spokes of a car she had just exited.

The lane’s old name, Adelaide, is reflected in the Adelaide Hostel at the back of the alley.

COSMO PLACE, Taylor between Post and Sutter. It runs west to Jones.

KRAMER PLACE, Greenwich just west of Grant. If there’s a Cosmo Place, there must be a Kramer Place, though it is in the Telegraph Hill area, nowhere near Union Square. Michael Richards, who played Cosmo Kramer on Seinfeld, was born in Culver City, CA, in the Los Angeles area, but the presence of these two streets is purely coincidental and I’d doubt it influenced the naming of his character. 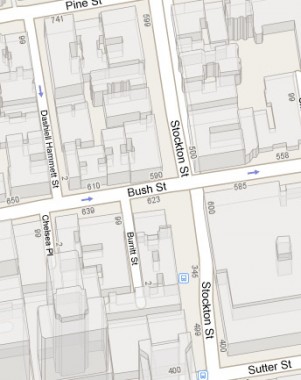 Samuel Dashiell Hammett (1894-1961) was an author of detective stories and novels. His characters Sam Spade and Nick Charles were immortalized on screen by Humphrey Bogart (The Maltese Falcon) and William Powell (the Thin Man series). He has been immortalized as “the dean of the hardboiled school of detective fiction.” Hammett was born in St. Mary’s County in southern Maryland; he was named for his mother’s family name, an Anglicization of the French De Chiel. While young, he worked for the Pinkerton National Detective Agency, but left after World War I when the Pinkertons were involved in strikebreaking activities. Hammett retired from writing in 1934 and became heavily involved in political activities for the rest of his life with his longtime companion, playwright Lillian Hellman. He enlisted and served in World War II in 1942 at age 48, serving in the Aleutian Islands. An organization he chaired, the Civil Rights Congress of New York, was designated a Communist front group on the Attorney General’s List of Subversive Organizations and when Hammett declined to testify against it in court, he was found guilty of contempt.

A veteran of two world wars, he is buried in Arlington National Cemetery in Virginia. He was a resident of San Francisco and his most famous character Sam Spade’s office was located here.

This, by the way, is an example of one of the newer San Fran street signs, and not everyone is thrilled with the new design which merely tweaks the old.

Walesa (1943-) formed the first independent trade union in a Soviet bloc country at Gdansk, Poland, in 1980; later assisted in the formulation of a noncommunist coalition government in Poland, was elected President in 1990; defeated in 1995.

This one-block stretch of Ivy Street was likely renamed for him after one of his visits.

Kerouac (1922-1969) was a pioneer of the Beat Generation of American authors, along with Allen Ginsberg, Neil Cassady, William Burroughs and others. He was born in Lowell, MA to parents of French Canadian nationality, and spoke French exclusively until age 6. He began writing his most famous work, On The Road, in French.

Kerouac lived in San Francisco off and on in the 1950s and 1960s. Two icons of Beat-itude, the Vesuvio Cafe and the City Lights bookstore, are on either side of Jack Kerouac Alley on Columbus. The alley was given a makeover in 2007, with repaving, new lighting, and engraved poetry by John Steinbeck, Maya Angelou, and Kerouac.

Saroyan (1908-1981) was an author and playwright from Fresno, CA, the setting of many of his stories, where he grew up as part of an Armenian-American community: his parents were from Bitlis, Turkey.

Saroyan’s most famous piece was probably the play The Time of Your Life (1939) set in a San Francisco waterfront saloon. It won a Pulitzer Prize, which he refused on the grounds that art should not be beholden to competition (years later, George C. Scott refused his Best Actor Academy Award forPatton for much the same reason).

Both Jack Kerouac Alley and William Saroyan Place are the renamed Adler Place, which was a dead end on both sides of Columbus Avenue.

Rexroth (1905-1982) was an essayist, poet and translator. He is considered the founder of the San Francisco Renaissance, an emergence of avant-garde writers and poets at the close of World War II. From poets.org:

Rexroth became a reluctant godfather to the Beat Movement, which grew out of the San Francisco Renaissance. In 1953, Allen Ginsberg arrived at Rexroth’s door bearing a letter of introduction from William Carlos Williams. Two years later, in October 1955, Rexroth curated a legendary reading that featured this new crowd–all unknown poets at the time–including McClure, Ginsberg, Gary Snyder, Philip Whalen, and Philip Lamantia. Ginsberg captivated the audience that evening with a powerful reading of an early draft of “Howl.” 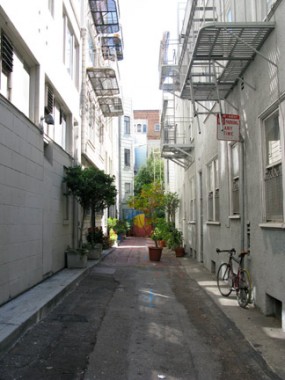 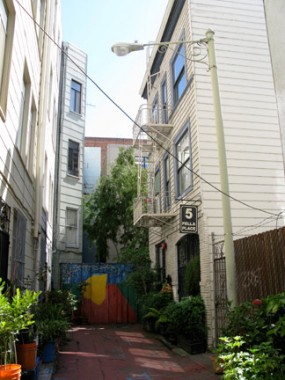 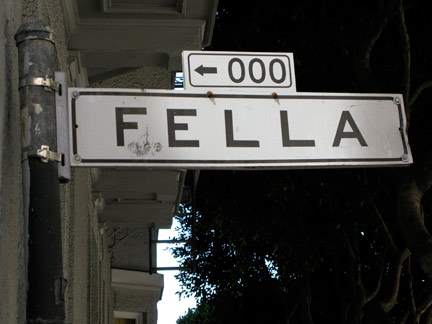 Most of San Francisco’s hidden alleys aren’t named for famed artists or writers; some bear names that are more or less unaccountable (here’s one theory), such as Fella Place, east side of Powell, just south of Pine, in not-quite Chinatown and not-quite Nob Hill.

Unlike Manhattan’s and Brooklyn’s, San Francisco’s alleys harbor actual addresses and residences (such as 5 Fella, photo above right). 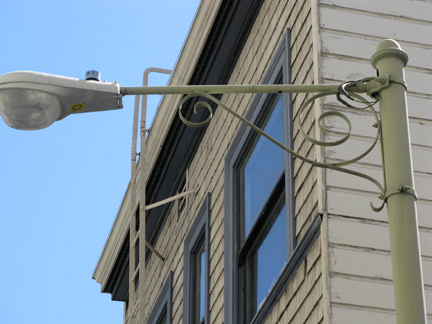 San Fran’s alleys also can contain archaic street lighting designs, such as this one with a scrolled bracket. 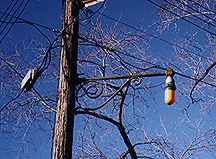 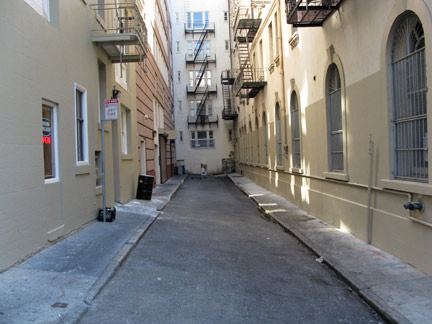 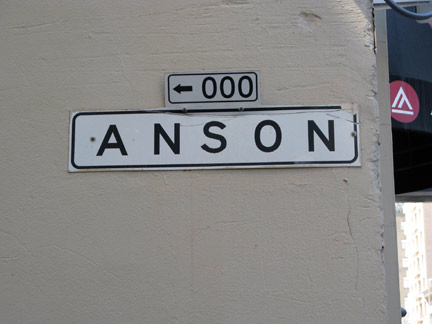 Anson Place, a couple of blocks south of Fella, east side of Powell between Bush and Sutter.

Francis Bret Harte (1836-1902) was an American author and poet, best known for the short stories depicting life on the American frontier in California, “The Outcasts of Poker Flat” and “The Luck of Roaring Camp.”

Harte lived in San Francisco between 1853 and 1871, where he edited The Californian, working with Mark Twain, who later criiticized his stories as inauthentic. After living in New York and Boston for a time, he was appointed US Consul to Germany in 1878; he lived in Germany, Scotland and England the rest of his life and was buried in London. He began his career as a journalist, describing in vivid detail the massacre of over 100 Wiyot Indians killed at the village of Tutulwat, Indian Island in Humboldt Bay on the north California coast. 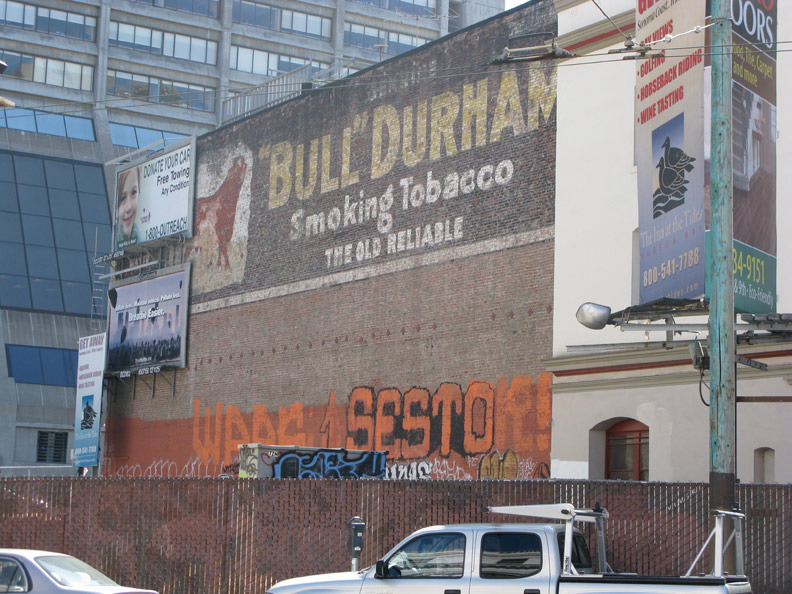 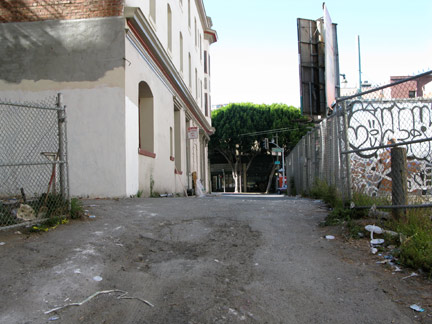 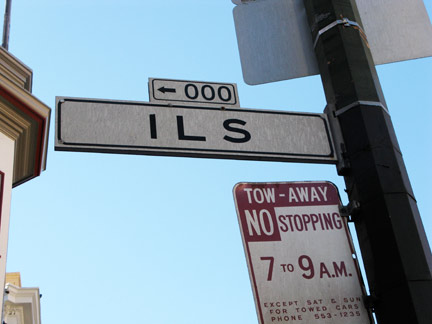 Saving the best for last, there’s a pair of alleys on Columbus Avenue, just north of Washington in the shadow of the Transamerica Pyramid, that form a V: Ils Lane and Gibb Street. I have no idea how it got preserved, but a large “wall dog” painted ad for “Bull” Durham tobacco is here on the wall, holding up well after over a century. 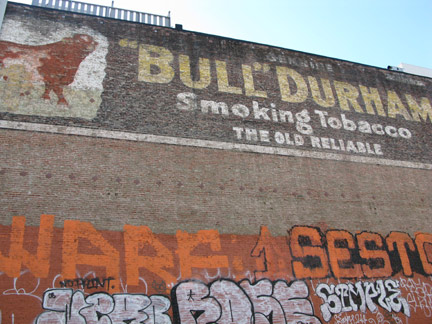 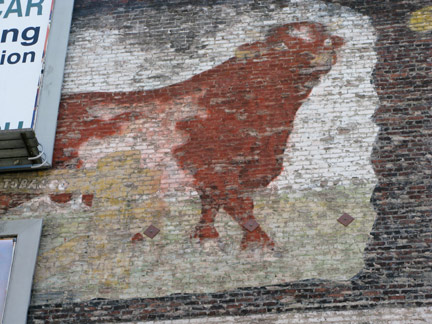 The Bull Durham brand … grew out of an incident in Durham, North Carolina that occurred at the close of the war. Soldiers from both sides raided a farmer’s tobacco crop as they waited for a surrender to be completed. After returning home, these same soldiers wrote back asking for more of this tobacco. The farmer, Mr. John Green, happily obliged; the tobacco was named Bull Durham in 1868 and later became the largest selling tobacco brand in the world. Duke University 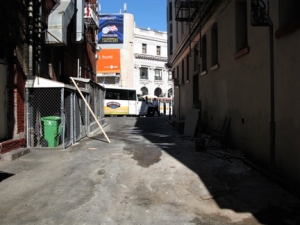 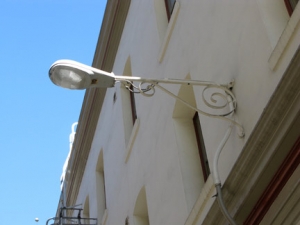 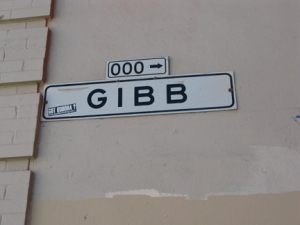 Adjoining Gibb Street is not much esthetically … but it does sport an ancient scroll-bracketed wall streetlight.