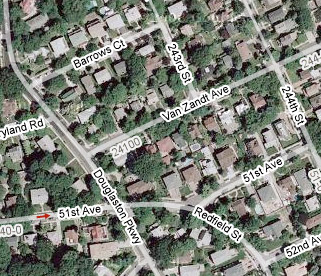 There’s been a Van Zandt Avenue in Douglaston, my old maps tell me, since 1910 or so, perhaps before that. The street is named for an early area settler, Wynant Van Zandt, whose ca. 1825 dwelling, now the Douglaston Club, still stands on Douglaston Parkway north of the railroad. 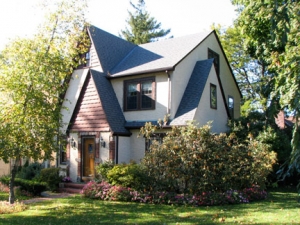 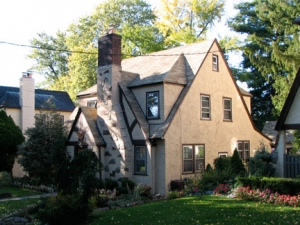 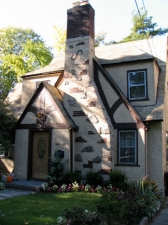 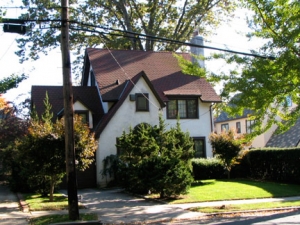 I was roving through Little Neck and Douglaston a few Sundays ago [2008] when I encountered one of the best clutches of Tudors and Tudoresques I’ve ever seen on Van Zandt just easty of Douglaston Parkway, and on a short stretch of Doug Parkway itself. I have my own place now in Westmoreland Gardens, Little Neck that I like, but if I won Megamillions it would be hard for me to decide what I wanted more, a brownstone in Brooklyn (Bay Ridge or Park Slope come to mind) a houseboat (I wouldn’t take it anywhere, I’d just sit on the deck) or, perhaps, a Tudor in Douglaston, like one of these. Since Van Zandt was one of the first streets to be laid out and built on, the Tudors here likely predate much of the other houses in the area… 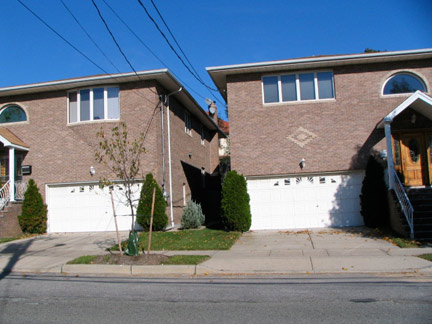 … some of which look like this, with no windows or front lawns to speak of. (It’s really a sleeping area, with wagon storage area attached.) The architects should be hauled up somewhere and asked to explain their actions, building things like this. 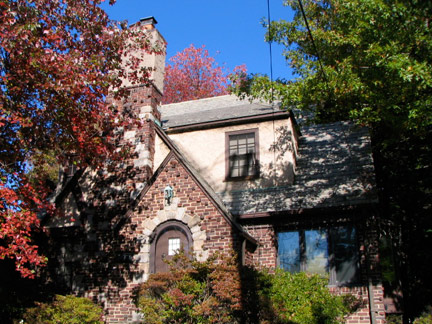 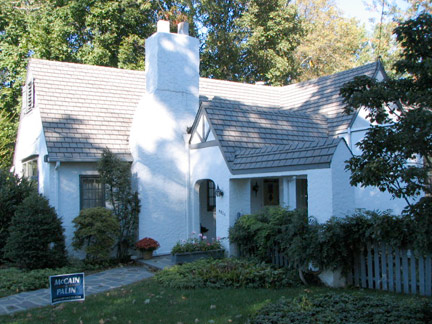 Cottages and cottage-types on Douglaston Parkway 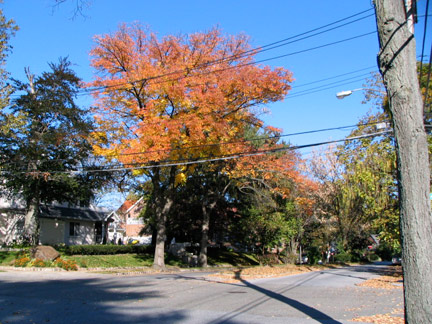 I love the little diamond-shaped thing in the brick on that new monstrosity. What is it, a placeholder icon for the window that should have been? Incredible contrast…

Hello. I am the Director of LINGUA MUSICA Australia. I create and organise Music and Art Tours ofr Australians in Europe and elsewhere. In September 2013, I am doing a tour, “IN THE FOOTSTEPS OF CLAUDIO ARRAU” and as such will be in New York for some of that time. I know Arrau lived for 50 years are 202 Shore Rd, Douglaston. I wonder if you are able to give me the name of the present owners of this house so I may write to them and ask if we may do a short vist at an arranged time.
I would appreciate any assistance you may give.

I have no idea, but maybe a reader does.

Unfortunately Arrau’s home was completely demolished last year. I stopped by on a visit to NYC and spoke with the construction crew, who had just started their work. They were very corteous but would not let me in due to liability concerns. At that point, the house still looked like the original but somewhat gutted out. They said that the new owner is a Chinese executive who recently located to the area.

Check out the following pictures to gauge the difference: