By 2008 the only real link I had to my home town, Bay Ridge, Brooklyn, is my dentist. I have been treated at the same practice, with two different dentists, since 1964 and, since my father’s demise and the conversion of Zeke’s Roast Beef to yet another Chinese food place (like there aren’t enough of those on 8th Avenue) the only thing, besides Forgottening, that brings me back to Bay Ridge on a regular basis is periodic visits to the House Of Pain.

Before and after another recent bout of drilling, however, I was able to snap about 90 photos that will make their way into various Slices over the next week or two. I first visited Third Avenue between Bay Ridge Avenue and Bay Ridge Parkway, which all Bay Ridgers (Ridgeites?) call 69th Street and 75th Street respectively. At this point in its way from downtown to Shore Road, Third Avenue emerges from the sarcophagus, the shadow forced on it from 18th to 65th Streets by the Gowanus Expressway. And it emerges spectacularly: Third Avenue is a vibrant, lively shopping street with a vivid neighborhood feeling, containing several excellent nightspots such as the Salty Dog (which was called the Brooklyn Dodger until the Dodgers sued) and the late, lamented Griswold’s, where my father and I would religiously head each year on his birthday.

Third Avenue harbors some truly ancient architecture and signage, and some surprisingly new signage, between 69th and 75th… 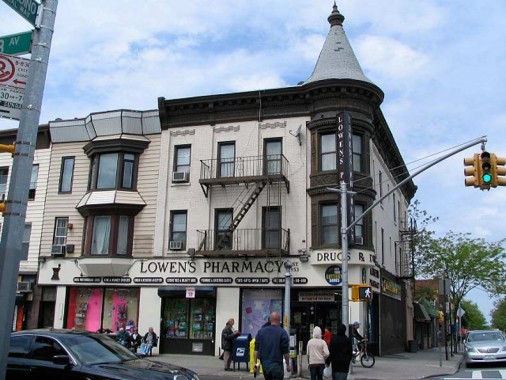 The peaked building with the rounded edge at the SW corner of 3rd Avenue and Bay Ridge Avenue has been home to a pharmacy on the ground floor for apparently most of its life, today’s Lowen’s; my friend Brian Merlis at brooklynpix has a photo from 1913, when it harbored Wolff’s. Much of the detailing on the corner section is unchanged, but oof, what they’ve done to the 3rd Avenue side. 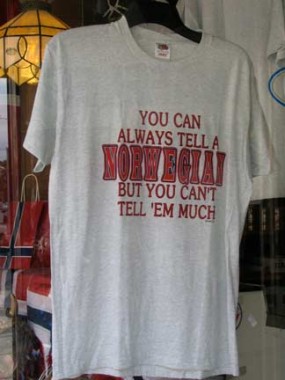 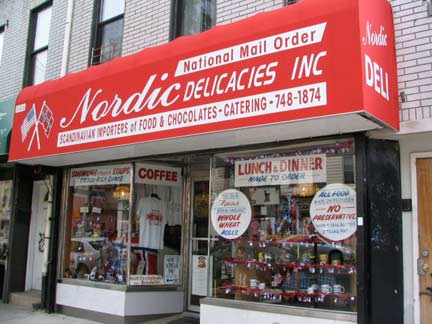 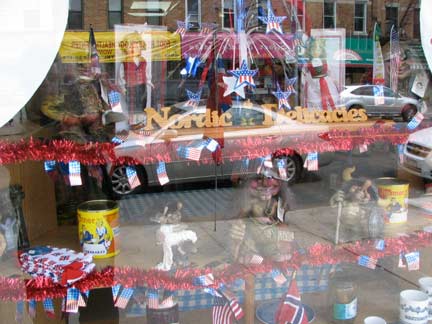 For the most part, the Norwegians, Finns and Swedes that used to make up 60% of the population of Bay Ridge and Sunset Park have moved on, but 3rd and 5th Avenue still boast some bastions of Scandinavicity such as the Nordic Shop on 3rd between Bay Ridge Avenue and Ovington, and Leske’s Bakery on 5th.

Bay Ridge also has the Norwegian Day Parade on the 3rd Sunday in May. 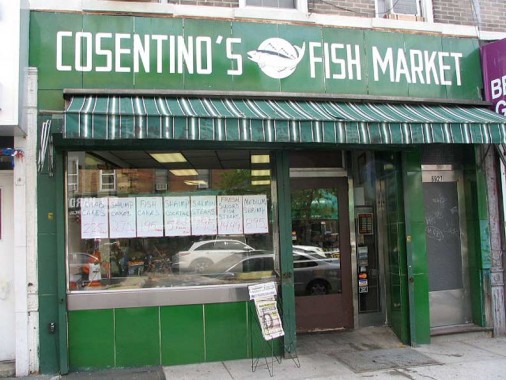 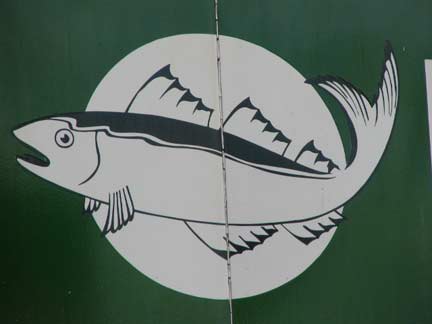 I loved the Cosentino’s Fish Market sign so much I blew it up.

Any fan of lettering has to love this sign. All the letters are fashioned as if to fit into a rectangular shape; the only oblique angles are in the legs of the A, R, K and the comma — and those are grudging at best. The color is basic, too: rich green with white trim. It’s all accompanied by a green and white awning. And, in case you missed the point, a rendering of a fish in the center.

I can’t get enough of basic signs like this from a no-nonsense era. 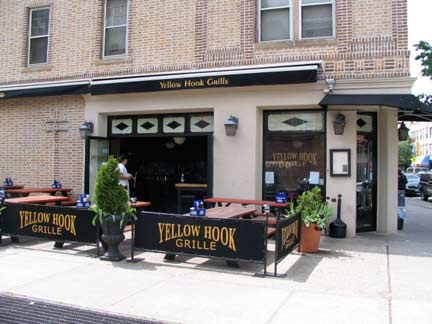 3rd and Ovington: I’d imagine that many of the Yellow Hook Grille’s patrons don’t give the origin of the name a second thought. But its owners are honoring Bay Ridge history…

In the colonial era and afterward, Bay Ridge was known as Yellow Hook, from its light-colored soil; but in 1853, Yellow Hook was renamed Bay Ridge at florist James Weir’s suggestion, since “Yellow Hook” reminded many of a recent yellow fever (the disease is potentially fatal) epidemic. 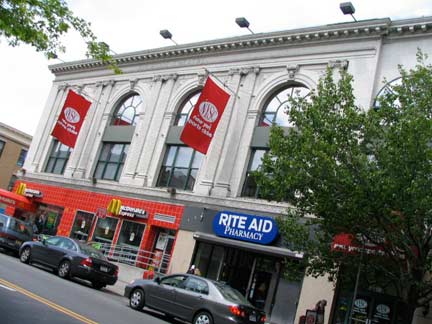 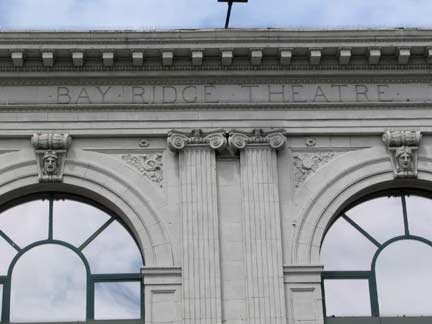 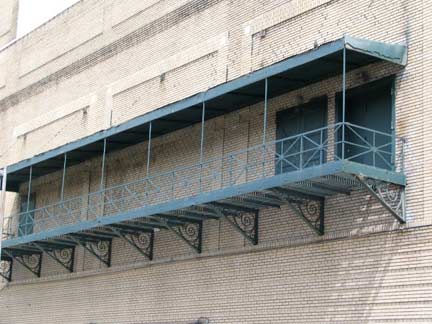 It’s been a long time since there were any picture shows at the Bay Ridge Theatre at 3rd Avenue and 72nd Street; when I was a kid, the ground floor was a bingo hall, whereas now it’s a Mickey D and a Rite-Aid, and the top two floors are a New York Sports Club gym, which preserves some inner detail.

Info is sketchy on the place, but from cinematreasures I can glean that it was built in 1915, Hubert Selby (Last Exit to Brooklyn) was born across the street, and Keye Luke used to MC matinees!

You have to like the iron scrollwork on the remaining fire escape. 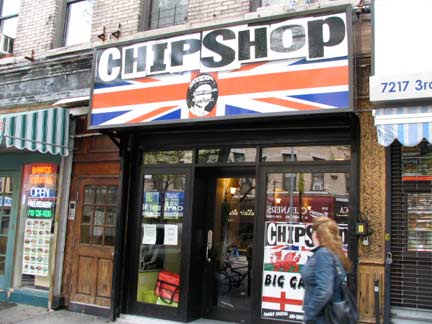 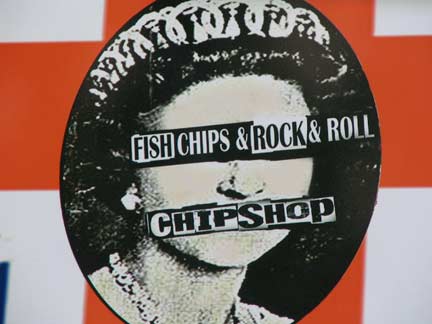 Bay Ridge is the last place on earth…OK, maybe the NYC area…that would be associated with punks at all, at least the punks of the late 1970s musical movement that produced the Sex Pistols…the Clash…the Adverts and many other British bands. (They in turn had taken their cues from American bands such as the Ramones who visited England in the mid-70s.)

I was never a punk but I liked the music and the attitude. In the 1970s Brooklyn was a disco town and St. Francis College, my alma mater, was a disco school. But I always figured that Jim Morrison, Jimi Hendrix and Janis Joplin had sacrificed their lives so we wouldn’t have to go around in suits and get short haircuts anymore, and why are we starting all this again? (Of course Jim, Jimi and Janis drugged themselves to death; the close association of drugs and rock music has always been an association I’ve struggled with over the years.) So, I gravitated to the punks, who made music that closely paralleled the raw, garage-y, basic sound I loved in the Swingin’ Sixties. Of course, the punks had their own uniforms: spiked hair, safety pins, which I likewise resisted. There were about 10 of us at SFC, and I’m not exaggerating, that liked punk and we were all on the newspaper staff, by some chance. We’d shut the door and blast it. The rest of the school shunned us.

So imagine my surprise, with Bay Ridge not being a punk town by any means in that 1976-1980 period, at the opening of a branch of the ChipShop chain, which uses as its logo graphic designer Jim “Jamie” Reid’s classic Sex Pistols’ God Save The Queen 45-RPM sleeve.

Reid’s ransom note style, in which he incorporated words and letters cut from newspaper headlines, went on to define the punk rock aesthetic. hyperempowered

In late 1970’s England, the Sex Pistols lead the blossoming punk rebellion. Artist Jamie Reid created many images for the band, including this one, the cover art for the Pistol’s first single God Save The Queen. Released in 1977 to coincide with the Queen’s Silver Jubilee Celebrations… the single was considered so shocking that it was officially banned from the English airwaves, yet despite this open censorship it became the number one song in Great Britain and helped launch the international punk rock movement. 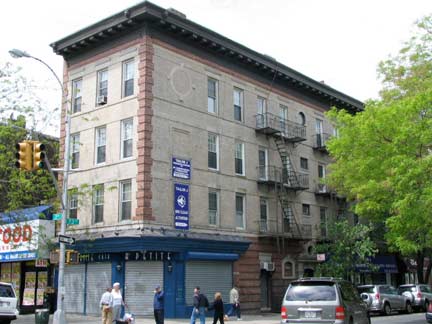 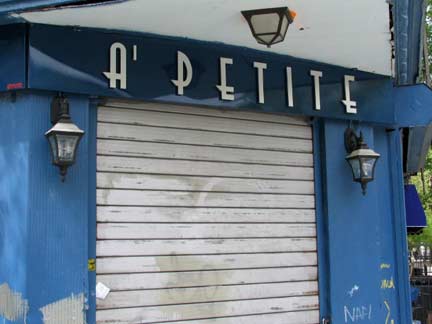 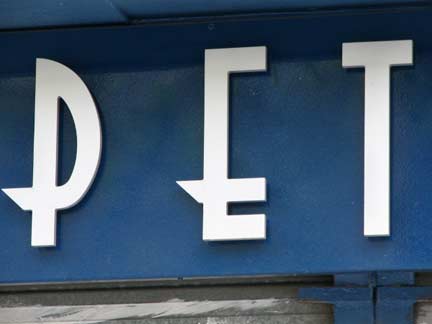 My eye for fonts led me to the SW corner of 3rd and 73rd, and the cleverly named Á Petite, which uses a sanserif font from the Fab Forties I can’t name right now. There’s a new font called Casablanca that parallels it but doesn’t match it exactly.

Does anybody remember the name of the German Bakery on the corner of 92nd Street and 3rd Ave?

The only bakeries in that vicinity were Quattlender’s on the corner of 93rd & 3rd. Back in the 50’s, there was another bakery on 3rd, I believe between 89th & 90th Sts., called Muller’s.

Yrs it was Christensen. Ivan and Juneth went to church with me. I moved to bay ridge in 1968 and worked at the Beverly shop on 5 th ave between 72nd and 73 till mid 1971

Christensen on 93 and 3. Owned by Ivan and juneth Christensen. I had gone to church with them. I worked the Beverly shops on 5 th +72-73-