Just as you can’t swing a dead cat (sorry, PETA) without hitting something called “Richmond” in Staten Island, The Bronx is filled with place names ending in “-chester,” as in Westchester, Eastchester, Parkchester. Until 1874, The Bronx was a part of Westchester County — New York County annexed the portion of Bronx County west of the Bronx River that year (Morrisania, West Farms and Kingsbridge), and east of the Bronx River in 1895 (the town of Westchester and parts of Eastchester and Pelham). The following year City Island voted to become part of NYC; New York County became a part of Greater NY in 1898, and finally, The Bronx became its own borough in 1914. The old town of Westchester is still represented by Westchester Square, where Westchester Avenue and East Tremont Avenue come together, and the square still resembles the county village it once was.

I have spent quite a bit of time in Westchester Square during my Forgottenhood — I admire its compactness amid the sprawling Bronx, which remains the Borough of Apartment Buildings and is more relentlessly urban than any other borough save Manhattan, despite the thousands of acres that make up Bronx Park, Van Cortlandt Park and Pelham Bay Park. My times here have not always been happy ones — I was in Westchester Square a great deal in the early summer of 2003, when my father was headed to the last roundup at nearby Calvary Hospital. But what a weekend it was in September 2006 when ForgottenTour 26 steamed through Westchester Square and Parkchester the same weekend the ForgottenBook hit the bookstore shelves. Did I miss anything in Westchester Square? If I did, perhaps this brief FNY series can fill in the blanks.

Westchester Square, even to the present day, appears to be a small town hub, clustering around the triangle formed by Westchester, East Tremont and Lane Avenues. The “town” has recently celebrated its 350th anniversary, having been settled here, as Oostdorp (‘east village’) by the Dutch in 1654 and taken over by the British with the rest of New Amsterdam in 1664. It became a busy port along Westchester Creek, which hastened its development; by 1693 St. Peter’s Episcopal Church was founded. The parish is still in existence. During the Revolution, patriots dismantled a bridge over the creek, delaying British advancement (the present-day bridge carries East Tremont Avenue over the creek). 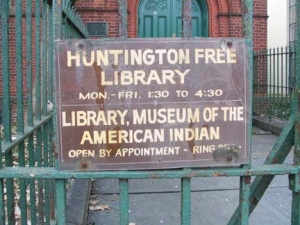 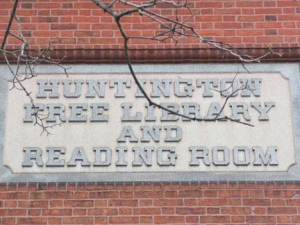 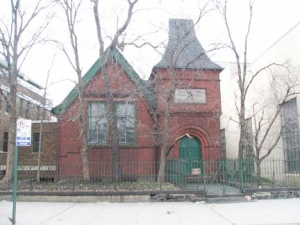 Don’t believe everything you read — the Huntington Free Library, #9 Westchester Square but located on Lane Avenue between Benson Street and Westchester Avenue– is open mainly by appointment these days, and the Native American collection it used to house has since been moved to Cornell University.

This library was a gift by local resident Peter Van Schaick in 1883 with funding by Southern Pacific railroad magnate Collis Huntington; the library remained unopened for ten years while details about the cost of its upkeep were worked out. The architect was Frederick Withers, who also designed the pleasantly Gothic Jefferson Market Library building in Greenwich Village. The “Free” is a reminder of the days when borrowing books from libraries free of charge was a novelty.

The Library’s Reading Room features an engraving and oil painting of Collis Huntington, a large map of Throgs Neck in the 1850s drawn by the late Bronx historian, John McNamara, and a visitors register including some well-known figures, including Booker T. Washington’s 1894 visit. Pipes for the reading room’s original gas lighting are visible near a book stack, as well as the library’s card catalog (an item quickly becoming scarce in most libraries), and vintage typewriters are on display.

The Reading Room, with its large Bronx picture and book collection, remains open weekdays by appointment at (718) 829-7770. Don’t miss it — it’s like a trip back to the past via the HG Wells time machine (see the ForgottenTour link above for interior photos). 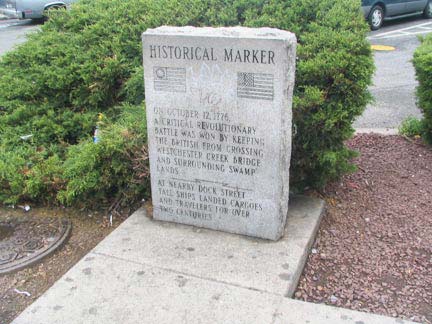 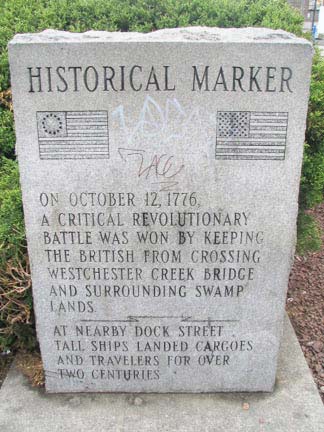 Across Westchester Square on the opposite side of Westchester Avenue, turn briefly on East Tremont Avenue and you will spot a small marker that resembles a tombstone. It marks the site of the Battle of Westchester Creek, Oct. 12th, 1776 in which a small group of 25 riflemen kept the British at bay by dismantling the planks of the bridge then spanning the creek.

The patriots then fired on the front line of the 4,000 Redcoats attempting to advance on George Washington’s army, then located about four miles away in Kingsbridge. The British were delayed only for a few hours but it was enough to allow Washington to slip away. (Much of the Revolutionary campaign in New York was involved in allowing the bulk of our armies to successfully retreat; this also happened during the Battle of Brooklyn in which 400 troops from Maryland engaged the British). 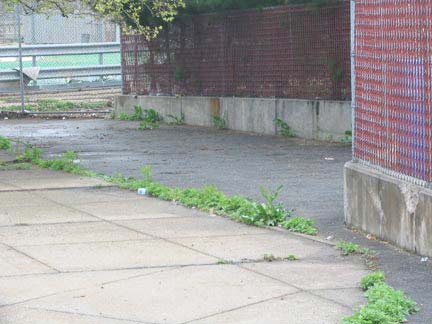 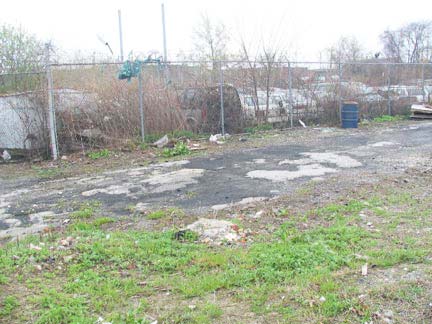 Note the inscription mentioning “Dock Street.” It is one of the oldest byways in the Bronx, running between East Tremont and Ferris Place. Along with Kirk Street (see this FNY Bronx alleys page) it was a landing point for ships approaching the town of Oostdorp, now Westchester Square, in the days of New Amsterdam. Since 1989, it has sat forlornly behind a chain link fence on the property of the Schildwachter Fuel Oil Corp. 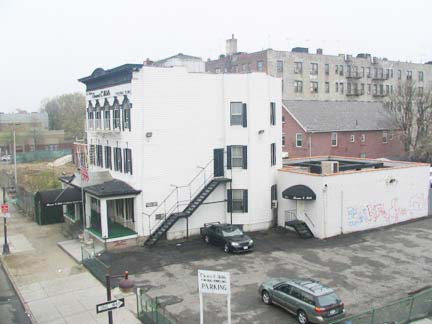 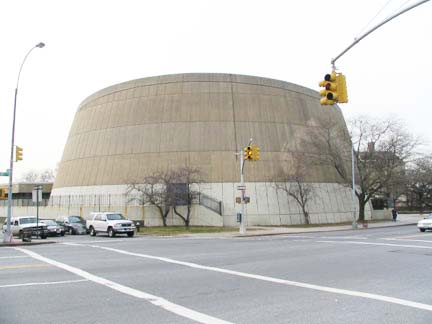 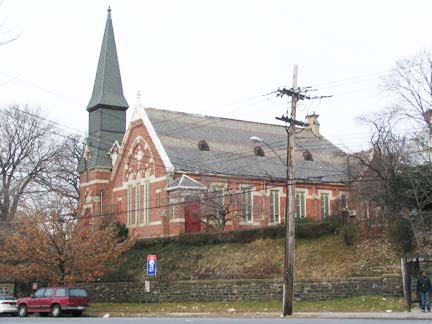 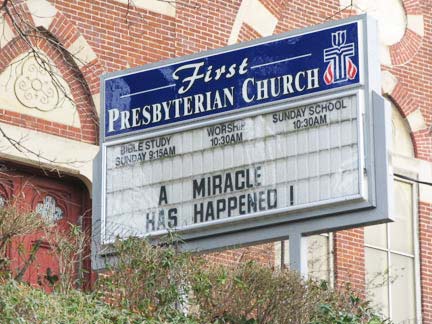 First Presbyterian Church of Throgs Neck, East Tremont between Ericson Place and Dudley Avenue. One of the Bronx’ great steeples, visible from several blocks around. The graveyard in the rear contains several names reflected on local street signs.

On to Westchester Square Part 2: the North Square

Cool, thanks for posting these pics of my old neighborhood! It’s nice that someone else likes to see the hidden-in-plain site treasures of the outer Boroughs!

Do you know the name of the two dress shops that were located in Westchester square During the 1950s? Thank you

Mae Moon’s and Harry’s I think

Harry’s was children’s clothing, owned by the Slenn family.. My Aunt Ann used to work there

Looking for the name of the mansion on Kearney Avenue that became part of Our Lady of Assumption Grammar School. I know the area was once part of the Pelham Country Club.

Loved to go to Jarks

Loved to go to Jarks and the Lunhionette near the El.

What was the name of the Bar on the corner of Eastchester Road and Blondell Avenue in the 70’s?

Spent many hours in the luncheonette and Jarks in1950 and 1951. Go Mounties

great place to grow up in the 1950ties