After our earlier ramble on Westchester Square’s southern edge, it’s time now to explore the northern end of Westchester Square, formerly the town center of the Dutch village of Oostdorp, renamed by the British Westchester when they took over the joint lock stock and barrel, as well as a few raccoons, in 1664. “Oostdorp” in Dutch means “east village” and Westchester is a somewhat literal translation of this, as the English “chester” is derived from the older “ceaster” or town center, and the even earlier Latin castra, or camp.

Let’s begin with a rubbish bin, shall we? 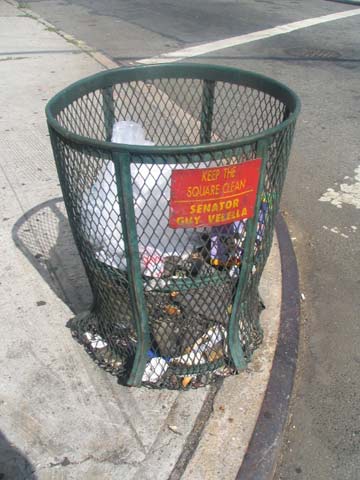 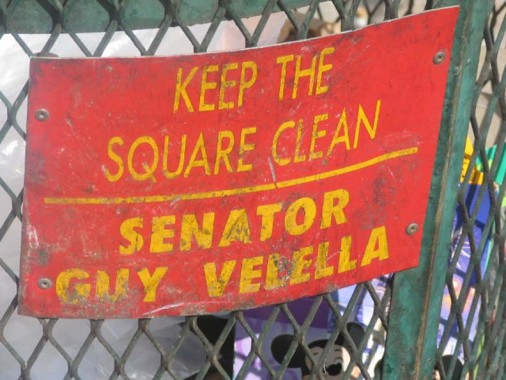 The waste basket with State Senator Guy Velella’s name on it says “keep the square clean” but, like many politicians, Guy Velella was far from squeaky clean:

A political leader, state assemblyman, and state senator for over 30 years, Velella was indicted in 2002 with 25 counts of bribery and conspiracy for allegedly accepting at least $137,000 in exchange for steering public-works contracts to the paying parties.He ultimately pleaded guilty to one count in exchange for a year in jail. As part of the plea agreement reached with the Manhattan District Attorney, Velella resigned his seat in the State Senate and as chairman of the Bronx Republican Party and also gave up his law license. Velella served a total of six months (in two separate stints) of his sentence at Rikers Island. wikipedia 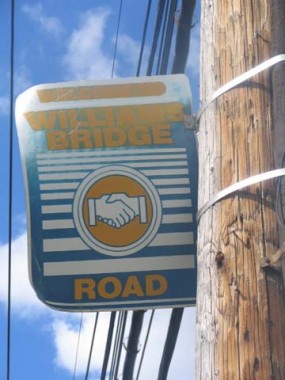 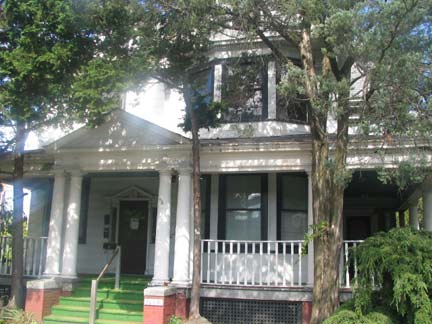 1604 Williamsbridge Road, off Pierce Avenue. The photo is from 2005 — the porched building with a wide lawn was razed soon after the picture was taken. Williamsbridge Road runs from Cruger and Adee Avenues southeast to Westchester Square, a narrow trickle at first, picking up lanes as it goes. It was named for John Williams’ colonial-era bridge spanning the Bronx River at what is today Gun Hill Road. 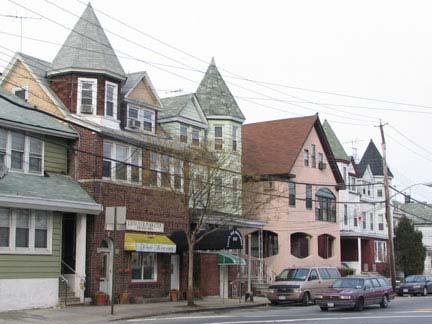 Silver Street houses. While Manhattan and Brooklyn have Gold Streets in their downtown areas, Westchester Square has a Silver Street. One of the Bronx’ oldest thoroughfares, it connects East Tremont Avenue (known as Bear Swamp Road in the 1800s as it ran through a swamp populated by bears; Parkchester is there these days) and the junction of Eastchester and Williamsbridge Roads. The street was laid out by Ezra Cornell (1807-1874), the founder of Cornell University; the Cornell farmhouse formerly stood at Silver and Williamsbridge. Perhaps, sometime after Cornell had left, the property changed hands with silver pieces, hence the name. 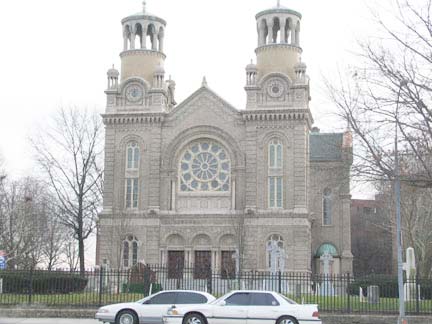 Twin steepled St. Raymond’s Church, East Tremont and Castle Hill Avenues. The parish was instituted by the Reverend John Hughes in 1842 and after waves of immigration caused the congregation to burgeon rapidly, the present large church building was constructed in 1898. The parish runs St. Raymond’s Cemetery, in two separate large plots, on Schuylerville along the Hutchinson River Parkway. 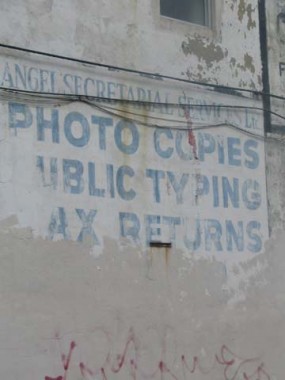 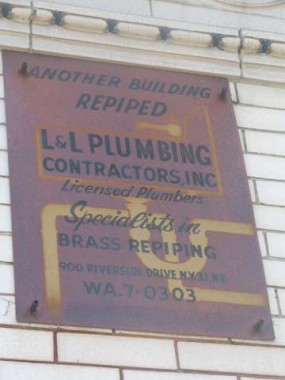 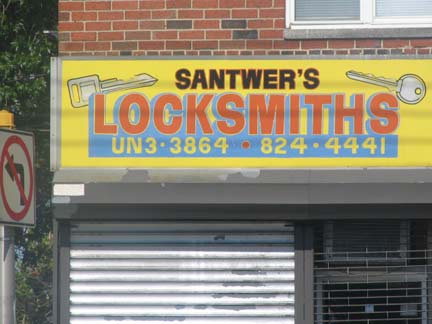 Three faded, or fading, ads and awning signs in the area. I’m not sure whether the WA was for Wadsworth, Watkins, or Walker; all were used as exchanges. The UN was either Underhill or University. 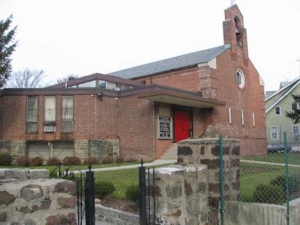 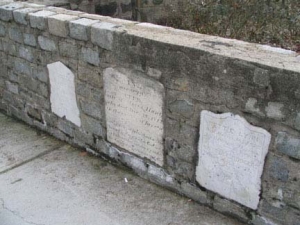 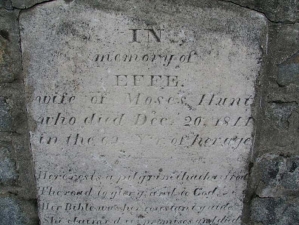 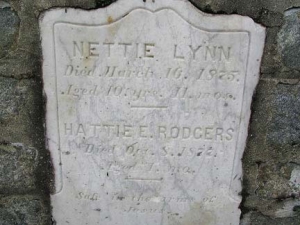 Westchester United Methodist Church, 2547 East Tremont near Silver, was organized in 1808 and incorporated on March 8, 1809, making it the oldest church of that denomination in what is now called the Bronx. The society was originally named “Zion Methodist Episcopal Church of the town of Westchester.” The first church edifice was erected about 1818 on Walker Avenue (now known as East Tremont Avenue), which was the road leading to West Farms, and the churchyard included a small cemetery. Zion Church was reincorporated on October 26, 1826, but it does not seem to have flourished, as the church corporation was dissolved by reason of non-user. The society was reincorporated a second time on February 7, 1833, under the name of the Methodist Episcopal Church of Zion in the town of Westchester. The first church was destroyed by fire at an unknown time, and the second church was built on the same site.

On May 9, 1910, the roof of the second church was set ablaze when the nearby Morris Park Racetrack caught fire, after which the congregation decided that a brick church would be safer. From 1913 to 1948, the congregation worshiped in the roofed-over basement that was two-thirds below ground; throughout this period, the church was known as “The Eelpot Church” because an eelpot is two-thirds submerged below water. Finally, in 1948, the present brick church was constructed over the basement. American Guild of Organists

One of the more fascinating aspects is the tombstones embedded in the stone fence. The oldest one, photo above, dates to 1814. 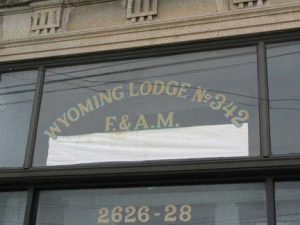 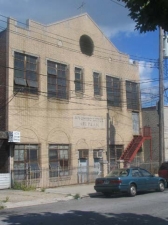 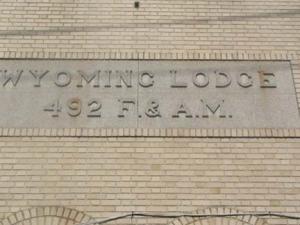 A group of Bronx Masons petitioned the Grand Master of New York State for permission to start a new chapter, since the name Westchester Lodge was already taken, they decided to call themselves the Wyoming Lodge, after they pull out a banknote at random and find it was issued by the Bank of Wyoming, Pennsylvania. F. & A.M. stands for Free and Accepted Masons.

I read with interest your article on westchester sq. mostly because having lived in the area all my life ( since 1939 ) I remember a lot of things but don’t ask me what I had for lunch yesterday. It’s really fun to reminisce about how it was a long time ago. One thing I noticed there was no mention of the lumber yard off of westchester sq. who’s fame ( notoriety ) was that it was where the guy who kidnapped the Lindburgh baby purchased the wood to make the ladder to climb up to the baby’s window. Just want you to know that now that I live in Florida, I wish sometimes that I had stayed.

The lumber yard that figured in the Lindbergh kidnap case was not in or near Westchester Square. It was on White Plains Rd.,near the corner of Gun Hill Rd. They also had a place a few blocks west, on Webster Ave., as I recall, just south of Gun Hill Road. It was the National Millwork & Lumber Company. If they did have a branch on or nr. Westchester Square, that branch had nothing to do with the case. The one on White Plains Road did. I have a couple of photos of it.

What is the wishes the square hospital ever called Dr. Black’s sanitarium

Did you ever find the answer to this question ? I am also looking for Dr. Blacks Sanitarium where my Grandfather passed away l

Interesting and fun facts. Some I have heard or read about and some deliciously new. I became friends with Walter from The Huntington Free Library. He would let me come in for hours at a time to view ALL the 1000’s of photograph and old books in the library area! It was an amazing time. This occurred from 1986-1987, almost every day during my lunch hour ( and beyond)

Ps: I’d love to see the guest log with
Booker T.Washingtons signature and mine many years later