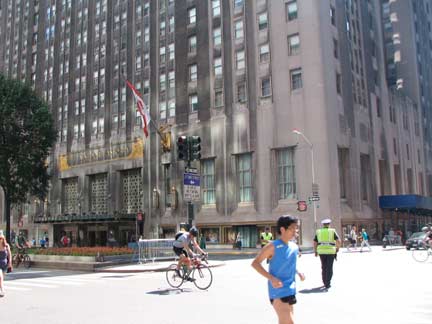 Proceeding north from the Helmsley Building and Park Avenue Viaduct at East 46th, you encounter the hardly-Forgotten Waldorf-Astoria Hotel, taking up the entire block from Park to Lex between East 49th and East 50th. It’s been the preferred lodging of presidents, generals, kings and queens ever since it first opened its doors September 30, 1931, in a then-new building replacing the old Waldorf, razed to make way for the King Of All Buildings at 5th Avenue and West 34th. It has beeen controlled by the Hilton organization since 1949. 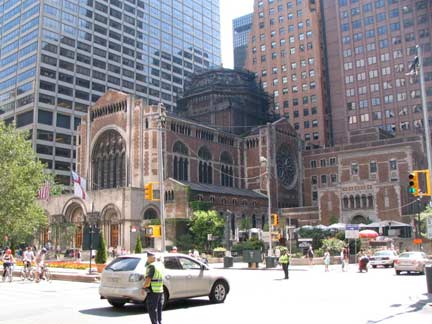 Across from the Waldorf at East 50th is St. Bartholomew’s Church, named for the least-chronicled Apostle. It serves an Episcopalian congregation founded in 1835, with the present Romanesque building (with a Byzantine-style interior) completed in 1919. In 1981 a developer wished to purchase St. Bart’s and demolish it for luxury housing, and court battles about its landmarking dragged on until 1991, when the Supreme Court upheld the landmark designation and the church was saved. 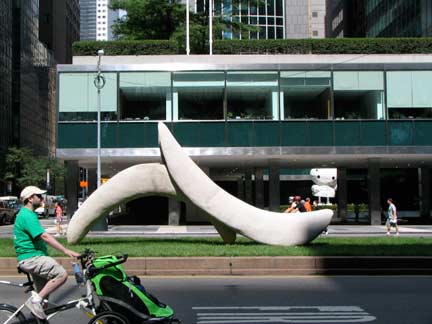 What looks like a pair of Godzilla’s incisors are displayed in the median on Park Avenue at East 53rd in front of one of the first glass-curtain International-Style buildings in the city, the 1952 Lever Building (built for the soap company). The art installation, which was in place till 8/28/10, is the work of artist Mia Westerlund Roosen. 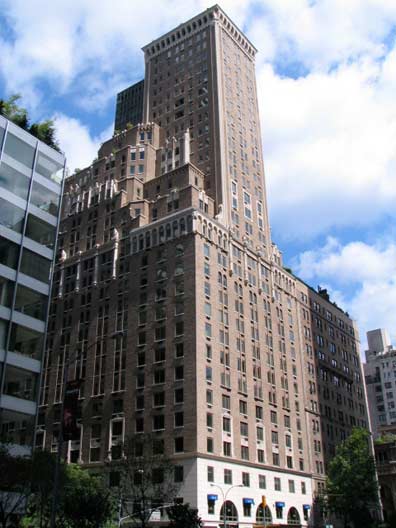 502 Park Avenue at East 59th, Hotel Delmonico, opened in 1928. According to Jim Naureckas’ Songlines, TV host Ed Sullivan lived here from 1944 until his death in 1971. It is now the Trump Park Avenue. 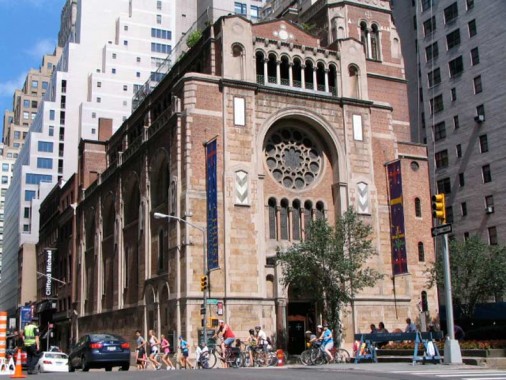 Yet another of Park Avenue’s stunning churches is the Methodist Christ Church at the NW corner of East 60th. It was constructed in 1932 but looks older than that. 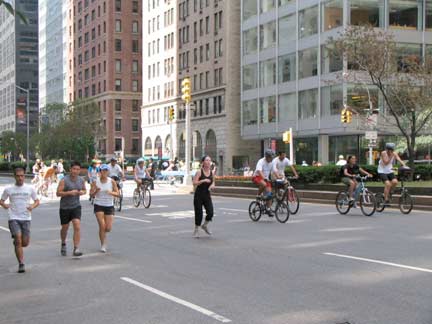 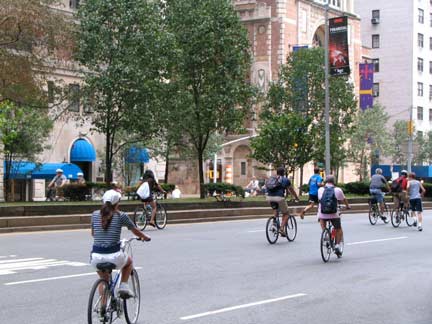 Pedestrians, runners and cyclists have Park Avenue all to themselves during the Summer Streets program. 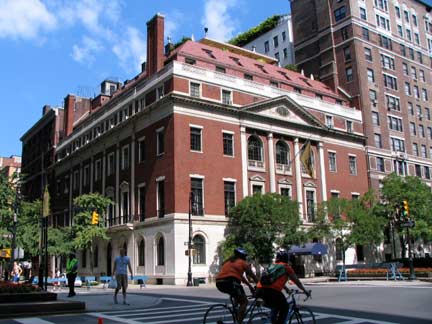 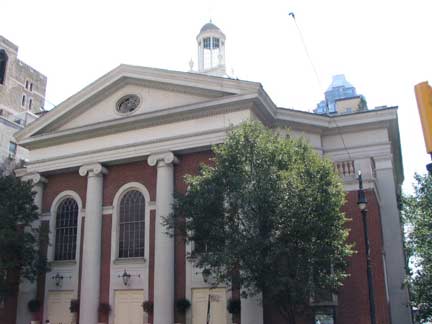 Above East 59th on Park Avenue, people much worthier than your webmaster live, work, and worship, and the architecture reflects this undeniable fact. ABOVE: 594 Park Avenue at East 62nd is the Colony Club building, constructed from 1914-1916. It was the first social club in the city organized for women. BELOW: Third Church of Christ, Scientist at 585 was constructed by Delano and Aldrich, same architects as the Colony Club, completed in 1924. 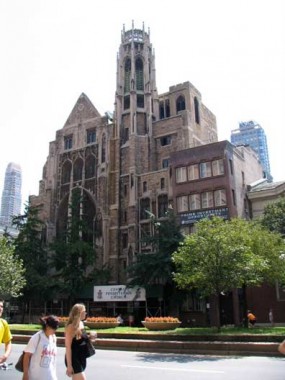 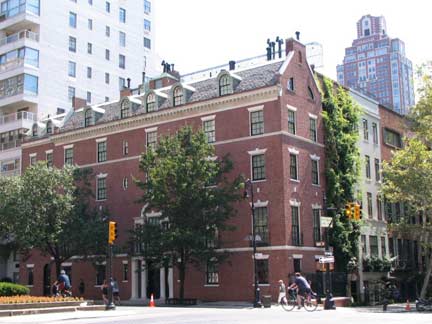 Central Presbyterian Church (originally Park Avenue Baptist Church) at East 64th and Park, SE corner, was built from 1920-1922 with a large endowment from the John D. Rockefeller Jr. It’s a large neo Gothic church serving a congregation that was established in 1821 on Broome Street downtown. Its 53-bell carillon was moved to the larger Riverside Church uptown when the Baptists moved there in 1929. BELOW: Federal style Thomas Howell House, NE corner East 64th. 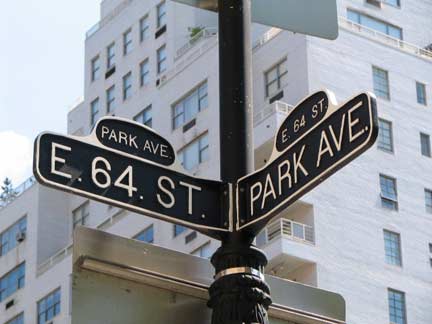 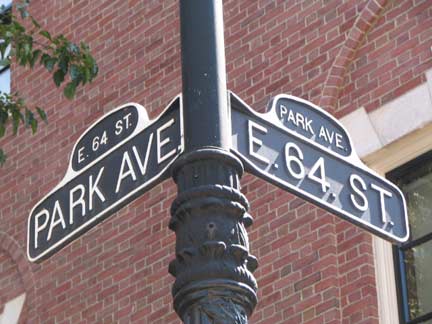 The retro-Bishop crook lampposts at Park and East 64th have a pair of metallic stencil street signs found nowhere else in the city. I’m not sure when they were installed. They’re reminiscent of the “humpbacked” street signs found elsewhere in the city that showed cross streets, replaced in the 1960s by color codes vinyl signs and then by green and white ones. 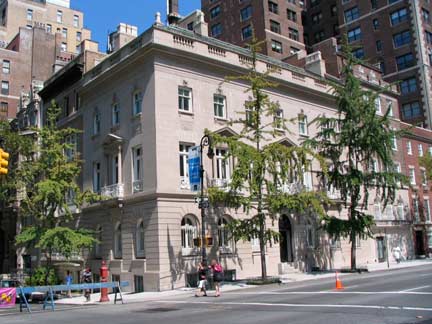 The Jonathan Buckley House on the NW corner of East 64th and Park is now the Swedish Consulate and Permanent Mission to the UN, one of a number of consulates along this stretch of Park Avenue. It was constructed in 1911. From the ForgottenBook: New York City still has a handful of imposing armories scattered around town, and the 7th Regiment Armory, completed in 1879 by architect Charles Clinton, with additions in 1909 and 1931, on Park Avenue between East 67th and 68th Streets, might well be the most fascinating.

The armory is the only remaining building in the country constructed using a wrought-iron truss system developed by Robert Griffith Hatfield, and its design, consisting of the Administrative Building and 50,000-square foot Drill Room, was inspired by the original Grand Central Depot on 42nd Street. The Drill Room was built to withstand the footfalls of thousands of drilling soldiers, contained crowds numbering in the thousands and even Army tanks.

The entrance gate on Park Avenue is wide enough to allow four-abreast marching formation through the massive oak doors. Just inside you will find halls lined with military-themed exhibits; the halls are leased for use by antique and book fairs. The more lavish rooms, designed by Louis Comfort Tiffany and Stanford White, are closed to the public, but are used by corporate-sponsored events.

When I visited in 2005 I was able to take the elevator to the mess, a massive Tudor-styled mess hall, complete with mounted deer and ram heads. I’m not sure you can get in there any more, but the Armory is open to vistors, at least some parts of it. Presently it is home to a constantly changing series of art exhibits. 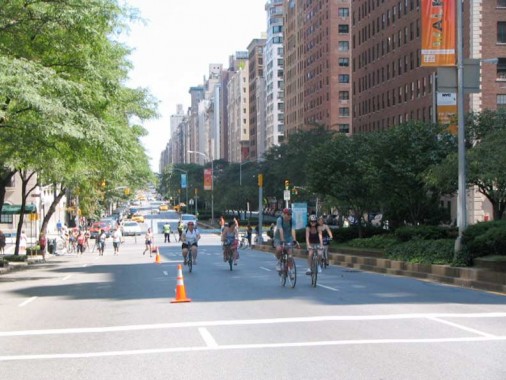 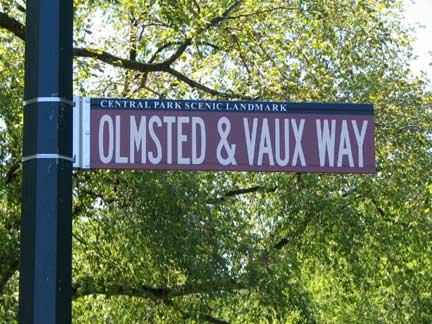 Saturday in the Park at Bethesda Fountain. BELOW: the founders of the feast, chief designers of Central Park in the 1850s.