A run of preternaturally sunny and mild November weather has allowed me to do some ForgottenWalks covering much of mid-and southern Brooklyn as well as western Manhattan, and all this will eventually show up in Forgotten NY. Today’s page found me taking the subway to the Atlantic Terminal area in downtown Brooklyn, from whence I set off in a zigzagged course generally eastward, winding up in Crown Heights, an area in approximately north center Brooklyn, east of Prospect Park while south of Fulton Street. Unfortunately, Crown Heights is known best to non-residents for the race riot that occurred there in August 1991. The lid has been kept on whatever simmering tensions remain from that time, however, and I have found things placid whenever I visit. The area is named for Crown Street, which in turn takes its name from the gentle hill on which it runs, “crown” as an elevation.

ForgottenFan Cyrus Forman: While it is technically named after Crown Street as you assert, one must recognize that Crown Heights was a real-estate created name meant to end the previous pejorative name of the neighborhood, “Crow Hill,” which dates back to a racist moniker for Weeksville. 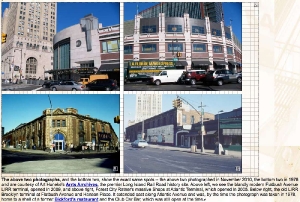 From FNY’s LIRR Stations page: Continuous LIRR service to Flatbush Avenue has been in place since 1877, when steam railroad operations were resumed along Atlantic Avenue after a 16-year hiatus. This brick station was opened April 1, 1907 and was demolished in 1988, though a tiny piece remained till the mid-1990s at Hanson Place. Since then, entrance to the LIRR station has been through a subway-style underground passage, but a new ticket window was opened in 2004 [with the new terminal arriving in 2009]. The spot where the old terminal stood was an undeveloped hole in the ground for two decades.