Continuing on West 30th after FNY’s survey between 7th and 8th Avenues, I had previously also chronicled the four corners of West 30th and 8th Avenue, where there’s an ancient wall dog ad for the Hotel Irvin, with rooms starting at $2.50 a night. There’s also the home of NYC Human Resources Administration and Department of Social Services, which is a place your webmaster hopes that I never have the opportunity to visit. Like many other of NYC’s side streets I hope to chronicle, there’s a mix of the feted and ignored, where boldfaced names alit however fleetingly, and buildings left unchanged for decades, and probably will remain unchanged until the next development nabob gets his hands on the site. 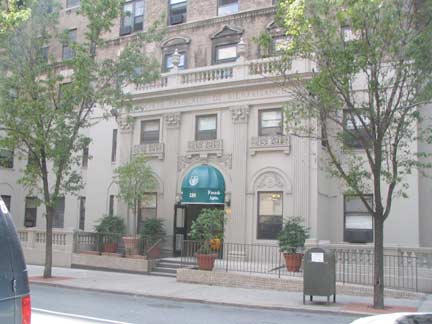 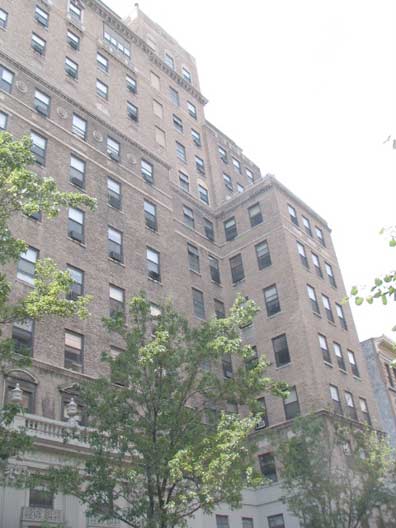 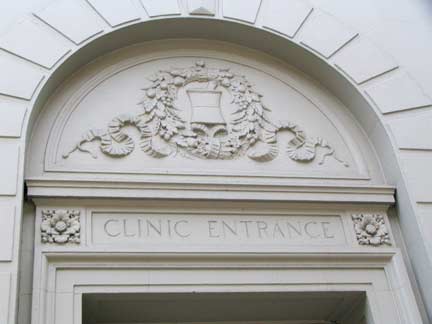 At 330 West 30th is a large building with the phrase “Société Française de Bienfaisance (French Benelovent Society)” carved over the front entrance, and two doors marked “clinic entrance” with the vessel-with-the-pestle motif marking medical facilities. From 1929 to 1978 this was French Hospital, where Babe Ruth was treated for nasopharyngeal cancer in 1946-47; Ruth passed away the following year. Don Corleone was taken to French Hospital after he was shot in Mario Puzo’s The Godfather. These days, 330 West 30th is the French Apartments.

So much of West 30th on this block looks frozen in time, especially as you get toward 9th Avenue. The exteriors of these buildings have likely not changed in decades. They still have their original corbel molds, and the building upper left still boasts window shutters and front door. Modern times have, however, begun to intrude. 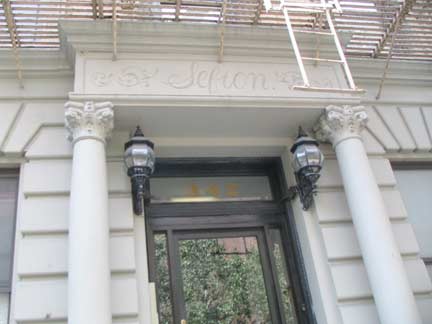 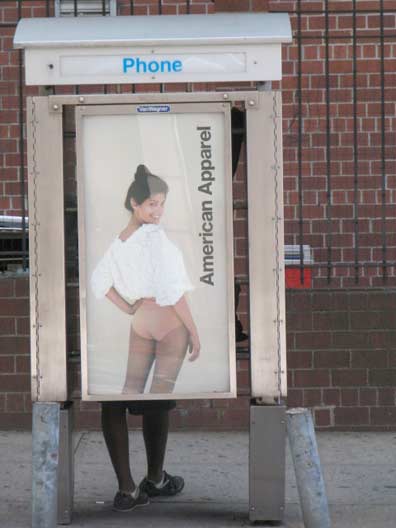 You know what, I had both pairs of legs lined up perfectly, but the guy moved a split second before I clicked the camera 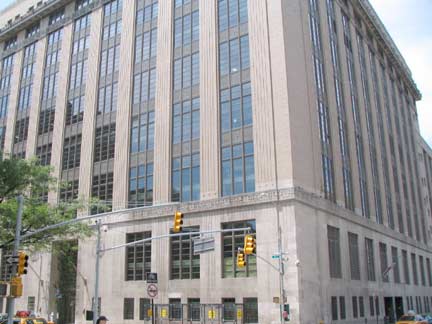 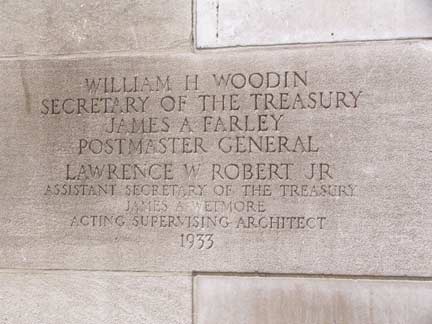 The giant Morgan Postal Facility, constructed in 1933, serving Manhattan’s main post office, the James Farley Building, at 8th Avenue between 31st and 33rd Street, dominates the SW corner of West 30th and 9th Avenue. Most postal operations have shifted out of the Farley here as preparations are underway to transform the Farley into the new Moynihan Station, serving Amtrak, New Jersey Transit, and Long Island Rail Road.

Looked at in any number of ways, the Morgan plant — named for Edward M. Morgan, the postmaster of New York from 1907 to 1917 — is a staggering example of federal logistics and enough to make one finally let go of one’s conception of the Postal Service as a third-tier operation mainly concerned with the avoidance of barking dogs. The plant itself is preposterously large: At 2.2 million square feet, it takes up an entire city block. It handles up to 12 million pieces of New York City’s mail every day. NYTimes 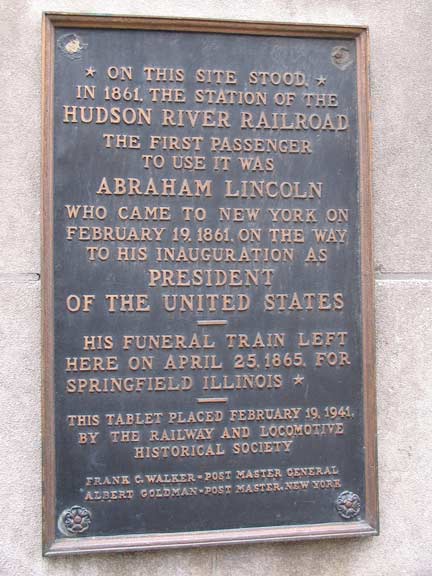 Long before the Morgan Processing and Distribution Center was built, this was the site of a depot for the Hudson River Railroad, a precursor of our Metro-North. President-Elect Abraham Lincoln arrived in NYC for a visit in the runup to the inaguration on March 4th, 1861, traveling from Springfield, IL by train beginning February 11th with stops in Indianapolis, Cincinnati, Columbus, Pittsburgh, Buffalo, Rochester, Syracuse, Albany, Poughkeepsie, Peekskill and then New York on February 19th.

Tragically, Lincoln’s next visit came after his assassination as his funeral train also left for Springfield from the depot.

The French Hospital’s natal/birthing are was on the 29th street side at 329 29th street.
I was born there on June 23, 1962 as my mom worked there for a Dr. Soloman.
She told me stories of warm days where she and a few of the other “girls” would leave the phone on the windowsill so they would hear it while they played tennis across the street.

I have my French Hospital Birth Certificate NOV 17 1944 — the 329 WEST 29th Street Address–signed by President: Theodore Seltzer and Attending Doctor: Myron Goldblatt. Thanks for explanation of address.

These picture bring back memories, I worked at French hospital in 1965, when my boyfriend returned from serving in the army he came to French Hospital to surprise me with his return, gee I would like a picture of the hospital before it became apartments,it’s been fifty years, I was only nineteen, try looking for a picture but have been unable to find one that I don’t have to down load through face book which I’m not on. can you please help. thank you

MY GRANDFATHER,FRANK:GEORGE: HANLEY, DIED THERE ,OF COLON CANCER,
IN MARCH OF 1945. HE WAS HOPING TO SURVIVE TO SEE HIS THREE SONS RE-
TURN FROM THE WAR.

I was born there in 1959 and have an original birth certificate with parts of it filled out in pencil and my foot prints on the back.

I was born there in 1964. Lost my original bits certificate.
Does anyone know where the records are now?

Born there in 1959. My original birth certificate I lost. We lived on West 85th Street.